Young candidates in Pittsburgh are sick of 'waiting their turn'

There is a common criticism of young politicians like U.S. Reps. Alexandria Ocasio-Cortez or Ilhan Omar: “wait your turn.” It implies candidates must gather a certain level of experience and the go-ahead from older authority figures before seeking office. More and more, that sentiment is being rejected across the county, and in Pittsburgh.

Ashley Priore is part of a new wave of young candidates who ignore that conventional wisdom. In fact, she's wanted to get into politics since she was a young child and says she's waited long enough.

Priore is 19 years old and running for a seat on the Pittsburgh Public School Board (PPS). And she is not alone. Priore is joining hundreds of other young people across the country vying for elected positions on the local, state, and national levels.

The 2018 midterm season saw an enormous spike in millennials (ages 23-39) running for, and eventually elected to, political office. Nearly 700 millennials ran as Democrats for about 6,000 state legislature positions across the country during the 2018 midterms, according to the Democratic Legislative Campaign Committee.

Jones says a challenge to being a young candidate is avoiding ruts where people are dismissive and want things to just stay the same. “Just because things have always been done a certain way doesn't mean it's the right way or most effective” she says.

That trend has continued this year, with several young people in the area running for seats historically held by older politicians. Their challenges include convincing voters they are just as qualified as anyone, amplifying their policy proposals, and completing the proper paperwork. They have the energy and some backing of younger voters, and obstacles lie ahead. But all of them are in agreement: They’re not waiting their turn.

Priore, a first-year student at the University of Pittsburgh and professional chess player, says she was inspired to run for PPS board because the students she tutors in chess told her they want someone closer to their age representing them. She also didn’t like that older adults were surprised to find out she understands the school board’s structure and issues.

“Instead of telling people they’re too young to run, they should be encouraging it…We’re the next generation of people who are going to make up the majority of leaders,” she says.

Priore says her young age would allow her to approach old problems with new ideas and she could find it easier to connect with students, many who already support her campaign.

“Some people are really excited, others can’t get over how young I am,” she says. 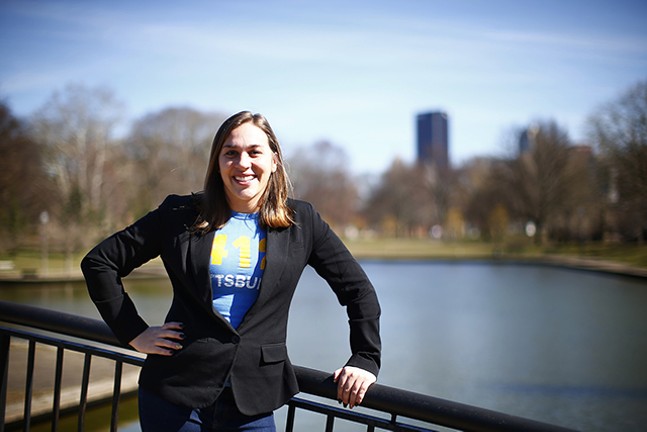 Meanwhile, Chris Kumanchik, 25, is currently challenging incumbent Bruce Kraus for the District 3 seat of Pittsburgh City Council. He views his young age as a “double-edged sword.” His goals, if elected, include rolling back parking restrictions on the South Side and stopping Kraus’ proposed gun ban.

The self-described moderate finds it tough to gain the trust of certain voters, no matter their age. “It can sometimes be a hard time with older voters because they may be quick to assume I’m lacking experience or have radical views, while younger voters see their views and my views do not necessarily align, and take problems with small disagreements,” Kumanchik says.

But getting voters to see them as legitimate isn’t young candidates’ only hardship. Sometimes their naivety in political workings can cause them setbacks.

Kumanchik faced the possibility of being kicked off the primary ballot after he missed a March 28 hearing that challenged his petition signatures. He says he wasn’t properly notified of the meeting, and the challenge was overturned at an April 2 hearing. He remains on the ballot.

John Celock, author of The Next Generation: Young Elected Officials and Their Impact on American Politics says it can sometimes be tough for younger candidates to get on their feet, with people questioning if they’re truly able to navigate the political arena.

Celock cites four reasons why young people run for office in America: they’re related to a politician, they always wanted to do it, they were once a political staffer, or they’re an idealist. Currently, he says the number of “idealist” young candidates is on the rise. He names both Priore and Kumanchik as fitting this description.

“I use it [as a] very broad term, mainly to talk about people very passionate about issues, and see elected office as a way to achieve their goals,” says Celock.

Ross Rocketto is co-founder of Run for Something, an organization that recruits and supports young progressive candidates. He says a “pretty solid number” of young candidates, as well as plenty of non-white, women, immigrant, and LGBTQ candidates, often encounter pushback despite their enthusiasm and are told to “wait their turn.”

“It tends to be folks attached to maintaining the status quo, the sort more likely to support the more established person,” Rocketto says.

Young candidates can defeat this skepticism after proving they’re capable and want to pursue creative solutions, according to Rocketto.

“Voters are tired of hearing the same things over and over again. They want to hear a new, positive vision of their community,” he says.

Bethany Hallam, 29, is running for Allegheny County Council and was inspired to join a growing chorus of regional politicians who are not older, white men. She plans to focus on issues such as environmental and criminal-justice reform.

Though she’s long been active in local politics, Hallam also has found it harder to convince voters she knows what she’s doing, and has encountered her fair share of people telling her to “wait her turn.”

“It’s not about your turn, it’s when you feel you can represent the voters better than anyone else can,” she says. “It doesn’t matter if you’ve been in politics for 40 years or if you haven’t even been alive that long. It’s about life experience playing into a narrative of a future of change.”

Hallam says her youth is a plus because she’s willing to educate herself about different political structures and policies to make up for less experience. She says she wouldn’t be “complacent” if elected to office.

“You really lose touch with people if you’re in the office all the time,” she says. “This isn’t old school politics anymore, doing it for social notoriety. The younger crowd [is] more than anyone else in it for the people, to effect change.”