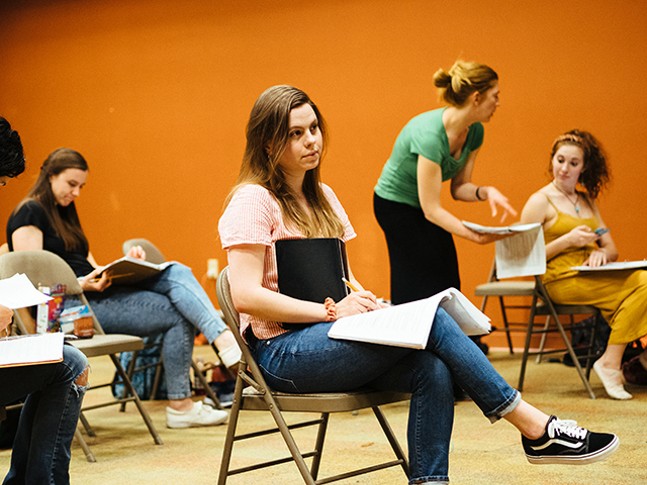 “She has a really strong face,” says Marsha Mayhak, who cofounded the theater company with Dick, and portrays Elizabeth Bennet in their production of the Jane Austen classic. “You’d never tell.”

The two women have a nervous energy and quiet confidence as they discuss their inaugural performance. They pause thoughtfully before answering, smile frequently, and one woman nods each time the other speaks. It’s intimidating to be in charge of a talented 10-person cast, Dick admits, but says she’s been in so many productions herself, “I’ve established a pretty good idea of what I like and don’t like in directing.”

After immersing themselves in the local theater community for years, the pair said they decided to form Cross-Stitch after finding a lack of leadership roles for women. Even when companies produce shows written by women, they say women’s voices often get muddied if they’re only directed by men.

It's encouraging for Dick and Mayhak to see Pittsburgh Public Theater headed by a woman like Marya Sea Kaminski. But there’s still work to be done. “A woman getting a job like that doesn’t mean that everyone is immediately OK with it,” says Dick.

“It’s still kind of a novelty,” adds Mayhak. “It’s still like, ‘Look at us, we’re doing this thing!’ And it should just be the norm.”

But while they say it’s important to have women at the helm, they don’t think the cast itself needs to be all women. Four of the ten actors in Pride and Prejudice are men.

“We wanted to normalize people working underneath women in positions of authority,” says Dick, “[to] break down that typical power dynamic that exists.”

Both women are graduates of Duquesne University — Mayhak with English and theater degrees in 2015 and Dick with a masters in English literature in 2018. They’ll be returning to their alma mater for this production, staging it at the school’s Genesius Theater.

Mayhak says they chose Pride and Prejudice because it was familiar.

“We want to establish ourselves with productions that people will want to see before they know who we are,” says Dick. “Then, once we’ve established our reputation and put on really solid performances, then hopefully people will take a chance on the more obscure works that we think people would love, too.” Future plans include tackling Restoration comedies, contemporary works, and magical realism.

“The Public’s production was very much a modernized revisiting, whereas this is more focused on the book,” says Dick.

The entire cast is coming together to support the women for their first performance, and it’s become a family affair. The costumes have been sewn by Dick’s mother. Christopher Collier, who is playing Mr. Darcy, has been helping build the set. Kaitlin Young, an old Duquesne classmate of Mayhak’s, has been volunteering her time to help with social media and PR. And, the actors don’t even know if they’ll be paid.

“The actors are very kindly accepting that we’re going to wait and see how many tickets we sell,” says Mayhak with a nervous smile.

The pair also faces one more unexpected hiccup. In addition to working around a low budget and juggling their new roles while still working multiple jobs, Mayhak has been accepted to George Mason University for graduate school in the fall. After spending her entire life in Pittsburgh, she will be leaving the city in August. She says she applied on a whim but wants to continue helping to make the company successful.

“The goal is to have other people make this their goal too,” says Dick. She says their company, like its name, is bringing threads together to make one product. 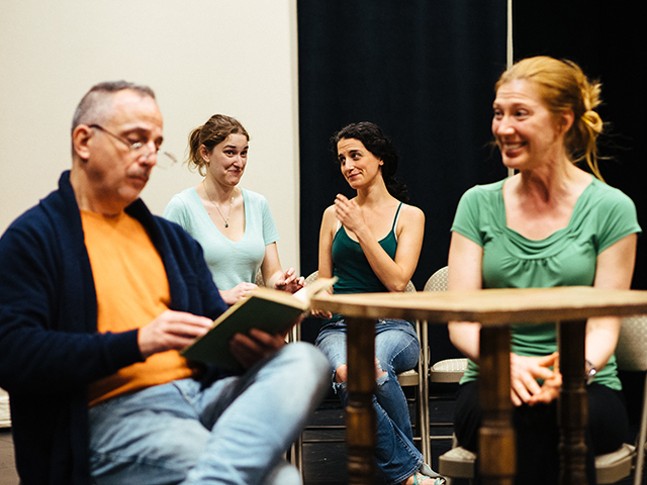 CP photo: Jared Murphy
Rehearsals for Cross-Stitch Theater Company’s Pride and Prejudice
“Women’s needlework is such an overlooked artform that has existed for hundreds of years but basically not paid attention to it because it’s considered domestic,” says Dick. “But it’s actually super intricate and impressive and has subversive messages in it. People don’t really consider it art because it doesn’t seem flashy enough, but it’s been underneath the surfaces for so long and some of it is just astonishing.”