You on the Moors Now at Point Park Conservatory Theatre Company

The script gives the company an opportunity to, theatrically speaking, go to town 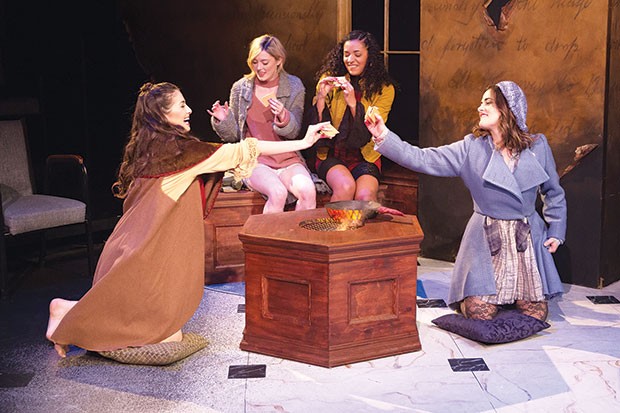 From left: Julia Small, Madeline Watkins, Aenya Ulke and Shannon Donovan in You on the Moors Now, at Point Park Conservatory

YOU ON THE MOORS NOW

It’s easy to see why Point Park Conservatory Theatre Company selected Jaclyn Backhaus’ new comedy You on the Moors Now as a vehicle for its students; it’s a large ensemble comedy featuring 16 strong roles. And as a mash-up of Pride and Prejudice, Little Women, Jane Eyre and Wuthering Heights — four novels written by four women focusing on the pre-20th-century lives of four heroines — there’s a strong emphasis on the distaff side of things, which isn’t always the case in theater.

We’re introduced to Eliza (from P&P), Jo (Little Women), Cathy (Wuthering Heights) and Jane immediately after they reject marriage proposals. In Backhaus’ telling, the four flee to the wilderness, relentlessly pursued by their suitors, and this collective struggle ends with a literal battle of the sexes. The story ends a decade later, when everyone meets up at an academic conference celebrating the battle.

The jumbled, ramshackle nature of the script gives the company an opportunity to, theatrically speaking, go to town. Fortunately, this Conservatory production is under the direction of Shelia McKenna, who welcomes the challenge with her fiercely intelligent and wonderfully nurturing guidance. Space limitations and cast size preclude individual mention, but that’s probably appropriate because McKenna has forged an iron-clad ensemble and sets them to work inhabiting, exploring and exploding Backhaus’ script. On Tucker Topel’s lovely set and dressed in Terra Skirtich’s colorful costumes, it’s a near-constant swirl of movement, dance and combat, with each actor a polished part of an entertaining whole.

If I’m being completely honest, I should say there’s a chance this company enjoyed working with the script a little more than the audience did watching it. While it’s not a bad play, it can be twee and unfocused, with a didactic finale that’s painfully self-aware. I was confused by Backhaus’ dramaturgy; as a confirmed Jane-ite, I have to say I didn’t recognize the Miss Bennet or Mr. Darcy she’s created, both of whom have nothing in common with the Austen originals except their names. That may be true of the other women as well, but I haven’t read any of those novels, as I’ve been too busy watching plays. 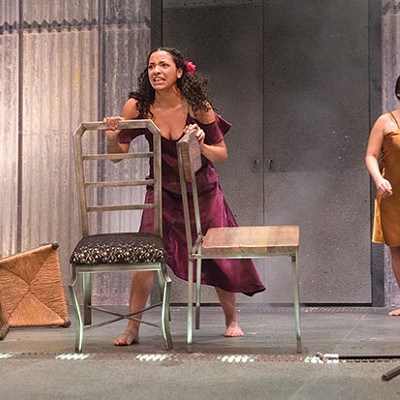 The Alchemists’ Lab at Point Park