'You miss the rush, you miss the food' at this French-inspired oasis in Wilkinsburg 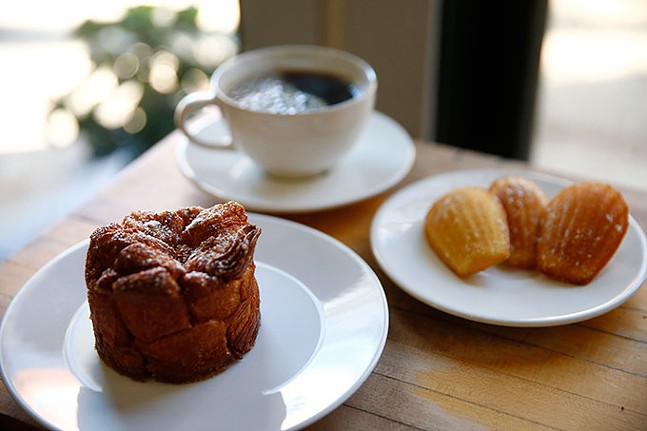 You can smell Madeleine Bistro & Bakery before you see it. Without the scent of freshly baked baguettes and warm croissants, the bakery might go unnoticed among rows of Regent Square homes.

But the unassuming location doesn’t stop the French-inspired bakery from selling out of sandwiches and treats almost every day. A cashier puts it bluntly: “You miss the rush, you miss the food.” Even in the early afternoon, when most bakeries are closing up for the day, a steady stream of passersby float in and out of the bakery.

Andrew and Abigail Stump opened Madeleine Bistro & Bakery in late 2017. The husband-and-wife team modeled the bakery around tried-and-true, Euro-influenced pastries and breads, choosing to focus on classics over trends. “That [traditional] technique can keep you busy for a lifetime,” said Andrew. “We’re not trying to reinvent the wheel.”

CP photo: Jared Wickerham
The inside of Madeleine Bakery & Bistro

They update their menu occasionally — the most recent addition a pull-apart bread made with croissant dough — but their core pastries stay the same: croissants (as big as your head), scones (sweet and savory), muffins, coffee and quick-bread loaves, bouchon (small chocolate cakes), and cookies. Baguettes and various types of sourdough are year-round staples, along with simple sandwiches.

There’s a comforting, rustic look to the bakery’s interior — curling, metal-backed chairs, an artfully tiled floor, a small patio open when the weather's good — that matches Madeleine’s hearty menu and small-town vibe. It fits in with the Stumps’ goal to be a “neighborhood gathering spot” and for the community to feel a sense of ownership over the bakery.

On one afternoon visit (I did not heed the cashier’s advice and missed the last sandwiches of the day), I settled in with a box of pastries. 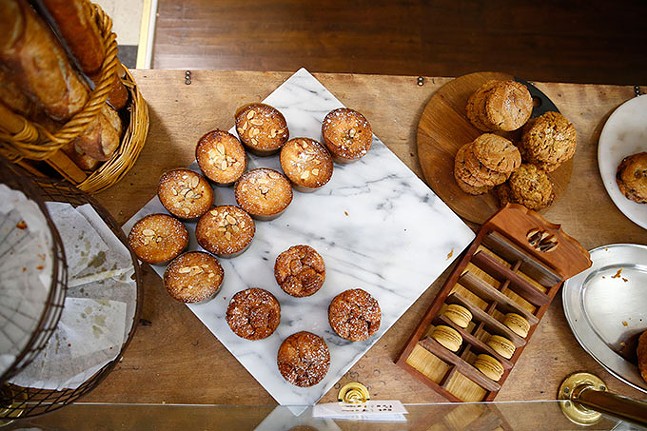 The savory scone — garlic, rosemary, and cheese — was buttery and dense, but not so much that the dough turned gluey after one bite. It was light and crumbly, cut into a triangle so the edges crisped. Roasted garlic added a punch but wasn’t as overpowering as garlic can be — instead, it brought out a peppery spice that mellowed with the earthiness of rosemary.

A morning bun, its flaky dough wrapped up into a tight circle, was next. Even though the bun was loaded with butter and brown sugar, the addition of orange zest made it oddly refreshing. 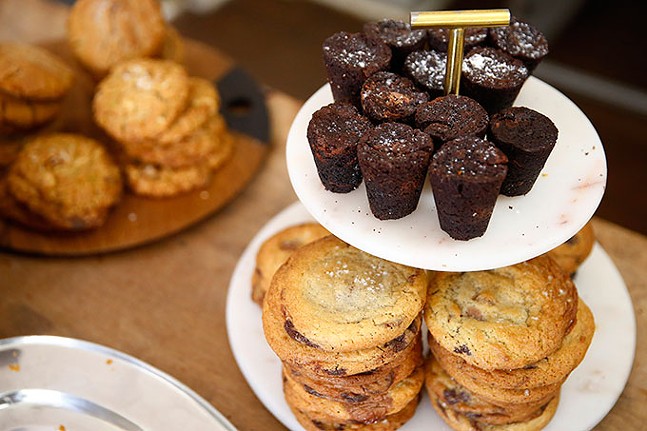 With a stroke of luck and the help of a friend who lives down the street from Madeleine, I scored a croque monsieur on a second visit. The traditional French café snack is nothing complicated, just ham, cheese, bread, and a slathering of butter (in this case, bechamel). The trick of putting cheese on the outer side of the bread allows for it to bubble and melt, adding a rich caramelization. Each element brings a necessary flavor and doesn’t overpower its companions. It’s filling but doesn’t feel heavy. The sandwich’s charm, just like Madeleine Bistro & Bakery, is in its simplicity.

Their namesake treat is light, lemony, and fit for royalty.

Take your afternoon treat with a cup of coffee or tea from the bakery’s seasonal offerings.

Out back, there’s a pint-sized playhouse. See if you can spot it!

Speaking of Madeleine Bakery And Bistro