You can't hang out with your friends, but you can eat brunch with Three Busy Debras | Screen | Pittsburgh | Pittsburgh City Paper 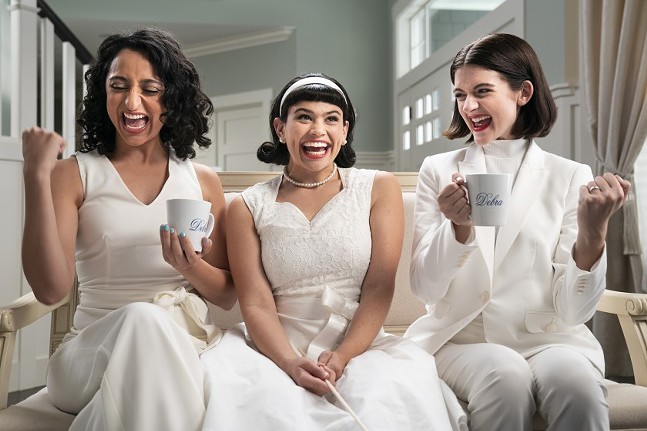 Warner Media
We're in the middle of a pandemic and stuck at home, so I should use this time to finally get into The Sopranos or The Irishman or something else that I "never have time for." But instead, I find myself only wanting to watch dumb, dumb television. An episode of Guy's Grocery Games where Guy Fieri makes contestants use chocolate pudding in their risotto. The scene in It's Always Sunny in Philadelphia where Frank lathers his whole body in hand sanitizer. The part in The Naked Gun where Leslie Nielsen farts into a microphone.

Enter Three Busy Debras, a short, dumb, and perfect parody of suburbia, a notoriously dumb place. Set in the fictional town of Lemoncurd, Conn., the Adult Swim show is created, written by, and stars Mitra Jouhari, Sandy Honig, and Alyssa Stonoha as three Stepford-y women who are friends and who are all named Debra. They all wear white and have very shiny teeth.

The show packs a heavy dose of absurdity into its 10-minute run-time. Right from the opening, with a name like Lemoncurd, you know this town and its people are off. We see one front yard where a woman is spreading shaving cream onto a hedge to trim it with a razor. Another lawn is adorned with roughly 100 tiny American flags.
In the first episode, "A Very Debra Christmas," available to watch on the Adult Swim website, the Debras are gathered together for brunch. Debra (Honig) is telling a story about her and her husband's oatmeal eating habits when she is interrupted by Debra (Stonoha), who just remembered that she and Debra (Jouhari) accidentally killed Debra's pool boy while pulling into the driveway.

"Did you at least clean up the mess?" asks Debra.

"No, I figured the pool boy would do it," replies Debra.

The women embark on a quest to clean up their mess when an angry neighbor threatens to call the cops and the "town tube-tier." Debra (Jouhari) carefully disposes of the body by shoving it into a human-sized purse. Debra (Stonoha) infiltrates a police station (where it says "to protect and to curd" on the wall) by stealing another policeman's outfit, who in turn dons her white pantsuit. Meanwhile, Debra (Honig) hosts auditions for her new pool boy, a la My Super Sweet Sixteen.

Three Busy Debras is effortlessly smart and stupid at the same time. It cuts the weirdest parts of suburban America, like an irrational allegiance to law enforcement or a love of huge SUVs, all while employing silly sight gags, like trying to shove a body into a purse that barely fits a cell phone.

You might not be able to leave your house or see your friends, but at least you can visit Lemoncurd and hang out with Debra and Debra (and don't forget Debra).

Joe Pera talks with me