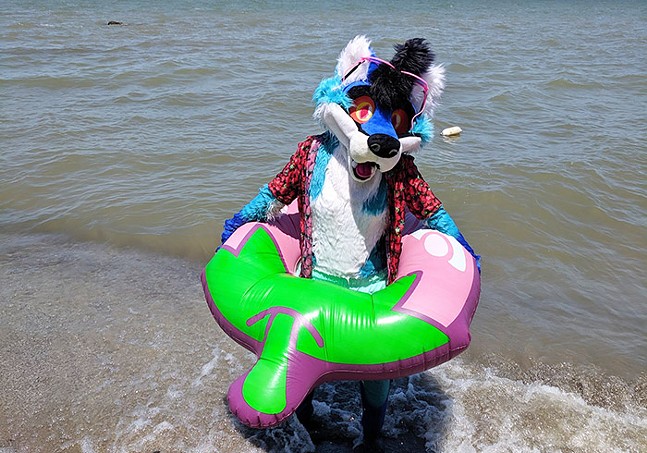 Photo: Bub (Berry Meat's fiance)
One of the largest — and most popular — events to cancel due to the coronavirus pandemic this summer in Pittsburgh was Anthrocon, the annual convention for furries: people who dress up as, write about, and produce art of anthropomorphic characters. People in Pittsburgh have come to love both the event and the furries themselves, who have proven year after year to be great additions to the city, visiting Downtown restaurants, taking selfies with locals, and passing on praise about Pittsburgh when they leave.

But Pittsburgh has some pretty great furries of its own, too.

Berry Meat is a Pittsburgh furry artist who also looks forward to Anthrocon every year, but not just because she gets to connect with her friends. It's also because, as an artist who sells artwork including stickers, trading cards, and pins, she relies on conventions like these to make money. "Many artists and other people who rely on cons for income (me included) are going to have a rough year," she says, "but the community is doing their best to share websites and commission openings for the artists who need it."


Berry Meat is one of 35 artists who created a black-and-white illustration for Pittsburgh City Paper’s Over-the-top Completely Ridiculous Yinzerrific Coloring Book, a benefit for both CP and the artists involved as a response to revenue lost to the coronavirus pandemic. The artwork includes local landmarks, legends, and — yes, Pittsburghese, in a wide variety of artistic styles.

CP talked to Berry Meat about her piece for the Yinzerrific Coloring Book, a super cute cartoon of a superhero Pittsburgh furry posed in front of the David L. Lawrence Convention Center, where Anthrocon takes place, and what it was like to work on a coloring book that came out during both a pandemic and a time of ongoing mass protests across the country. 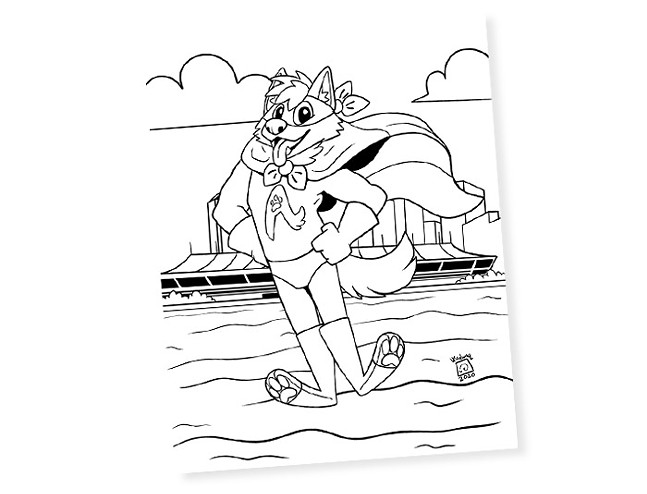 Berry Meat's Pittsburgh superhero furry coloring book illustration for Pittsburgh City Paper’s Over-the-top Completely Ridiculous Yinzerrific Coloring Book
Berry Meat is a great name! How did you come up with it?
I have always loved strawberries and fruit in general. I have also always been fascinated with the idea of weird and possibly disturbing ideas being represented by cute and colorful things.

I saw pics of rabbits and other animals eating strawberries, but the red fleshy fruit made them look like ravenous carnivores, so it inspired me to take the concept I mentioned and my favorite fruit and turn it into berrymeat!

Berrymeat is a simplified way to express weird, creepy, and disturbing meeting cute, silly, and colorful.

When did you first know you wanted to become an artist?
Oh gosh, I have been drawing for as long as I can remember. I want to say that middle school is when I started down the path of becoming an artist by meeting weekly with a tutor.

Can you tell me about the process that went into illustrating your rad Coloring Book artwork of the superhero furry?
Usually I will think on a subject, and an idea just pops into my head! As I work, the idea morphs and changes based on how the image is coming along. So basically, I kinda just make it up as I go!

When thinking of the background, I wanted to feature the David L. Lawrence Convention Center because that is where Anthrocon takes place, and the riverfront underneath the convention center is very iconic within the community.

You’re a furry yourself. How bummed were you to hear that this year’s Anthrocon convention was cancelled this year because of the coronavirus pandemic?
I am happy that it was canceled, because I don't want people to get sick. It is a shame for sure (especially since my wedding was originally going to be two weeks after and I was gonna have a party at the con, but that was postponed as well), but it is for the best.

Your furry persona, and your entire portfolio, is so colorful and whimsical. How do you want people to feel when they see your artwork?
Mostly, I just want to make people happy! And sometimes make them uncomfortable with odd imagery. But there is no right or wrong way to feel about my art. I just like to create!

Pittsburgh has really come to love furries over the years, but there are still some folks who don’t understand the fandom. What’s the one thing you wish everyone would know about furries that you think isn’t quite understood?
The furry community is very diverse. It is full of all types of talent and passions, so no two furries are going to be the same. Many people are furries for different reasons, but the one thing we have in common is appreciating and celebrating the concept of  anthro animals. I think people often forget that furry isn't just dressing up like an animal, and many furries don't even do that!

This coloring book is coming out during one of the most important civil rights movements in modern times. Do you think artwork has the power to heal?
I think art has the power to open people's minds and see the world through someone else's perspective, whether it's visual art, dance, music, or any other way people express themselves.

What’s next for you?
I am just going through life one day at a time. I just got a new house, so I will be working on renovations for a while, but will continue to do art between hammer swings!

Who’s your dream client?
I don't really have one, honestly. Just anyone who would be happy to receive art made by me :)
Digital copies of the Yinzerrific Coloring Book are $20, and print copies are $25, and can be pre-ordered at pghcitypaperstore.com. Half of the proceeds of each copy get split evenly between each of the 35 artists who created artwork inside each book.

Dara Birnbaum: Journey goes from advent of TV to fringes of the internet