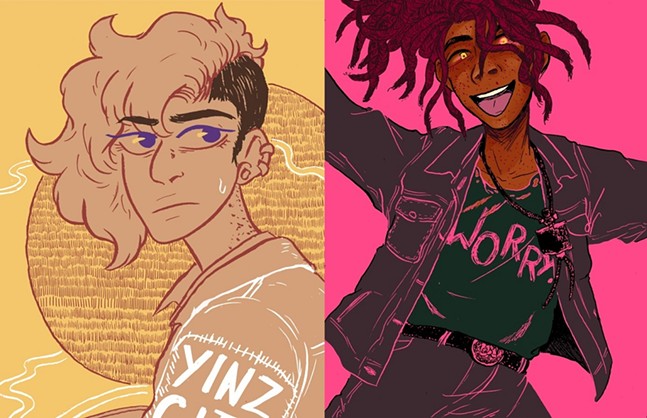 “Comics are just dumb and gay,” rose says with a laugh. But rose, who recently put out the second issue of Yinz City, their self-published comic about transmasculine life in Pittsburgh, believes these qualities are what make the artform so approachable, even when the sometimes toxic, so-called comic book guy discourse may turn people off. “If you go into it knowing that, I feel like it's easier to be like, 'Oh, this is worth my time.'”

A native Philadelphian, rose started attending the University of Pittsburgh in 2009 and, save for a brief stint in Chicago, made the city home. They became involved in the local arts scene after participating in the Pittsburgh Zine Fair, an annual event dedicated to DIY publications.

In spring 2019, rose released their first issue of Yinz City to not only center transmasculine people, but specifically transmasculine people of color. The narrative, they say, is a mix of real-life experiences mixed in with some fictional elements they describe as “so ridiculous but would make sense that they would happen in Pittsburgh.” The website goes a little deeper, saying the comic follows the main characters and their friends as they "navigate found communities, awkward relationships, shitty part-time jobs and lame parties."

The four main characters reflect some of what makes the queer and trans communities in Pittsburgh so complex in terms of identity and race.

“My friend, who is also transmasculine, used to joke about how, in the trans community in Pittsburgh, there are four transmasculine people, and the rest of the community is trans women,” says rose. “It's kind of true, but also an exaggeration. … I thought about it for a while and then I realized, 'well yeah, in the white community there's a handful of trans men, but in terms of people of color, there is a good number of us who are transmasculine.' So I decided to write about four main characters kind of based on that joke.”

The comic was also informed by their experience of being transmasculine – commonly abbreviated as transmasc – in both the city's “straight academic world” and “predominantly white queer community.”

“I feel like people of color in the Pittsburgh queer community are definitely isolated,” says rose. “I wanted to write about that in particular.” This extends to rose's first comic, A Queer Femme Guide to White Boy Thirst, which they jokingly describe as “about being Black and being cursed by being into white guys and the strange racial tension around that.”

Within Yinz City's story are variations of trans and transmasculine identity. While one Google search generally defines transmasculine as a term used for those “assigned female at birth, and whose gender is masculine and/or who express themselves in a masculine way,” rose says it really depends on the individual.

"I think if I tried to explain it in general, I would do everyone a disservice, because the question there is, what the hell is masculinity then?" says rose. "That means so many things to different people in terms of culturally and philosophically.”
click to enlarge


They add that they adopted the transmasculine label “just because it's an easy way to explain my experiences” as someone who has had top surgery (a procedure to remove the breasts and reconstruct the chest), takes hormone therapy, and is “generally perceived as a masculine person.” They wrote Yinz City so the characters all represent their masculinity in different ways because, as rose puts it, “there are so many ways to be trans and there are so many ways to be transmasculine."

“It's whatever you want it to be,” says rose, adding that, like with anyone, identities also transform over time. “It is just like every other aspect of being a person. It's a learning process and it changes and develops based on your understanding of yourself and how you experience new and different things.”

They understand that some in and outside of the trans community would debate this belief, but add, “I'm past the point of really caring what other people have to say."

But while rose seems reluctant to take on labels, they have learned the value of them from being a Black person in the queer art community in Pittsburgh.

“It's a conversation I've had with my other friends who are queer artists of color, where it's kind of like, you are invisible until you announce that you are a queer artist, and then suddenly everyone cares,” says rose.

This, they believe, is reflected in how people approach their zines, which then dictates how they're titled. Customers have told them that they picked up White Boy Thirst simply because it had the term “queer femme” in the title. Otherwise, rose believes people would avoid their work because of the assumption that it would only cover Black issues.

“I feel like I have to trick people into picking it up,” says rose.

Even so, rose says they have received positive feedback from people about their work, including Tittychop Boobslash, a 2017 comic about their top surgery. “A lot of people have contacted me and been like, 'this helped me understand myself a little bit better, and this gave me a new perspective on how I can go through the world or talk about myself or talk about it to other people.”

They plan on continuing Yinz City for 20-25 issues over the next five years, and while it touches on a myriad of issues, rose says their mission for the series is simple.

“My goal with Yinz City is just to have fun, honestly,” says rose.