Yes, it’s still legal for businesses to discriminate against gay people in most of Pa. | LGBTQ | Pittsburgh | Pittsburgh City Paper

Yes, it’s still legal for businesses to discriminate against gay people in most of Pa.

CP photo: Ryan Deto
People's Pride celebration in Pittsburgh's North Side in 2019
On Monday night, a political ad for a local state House seat hit Pittsburgh TV screens informing viewers that candidate Rob Mercuri (R-Pine) supports allowing businesses to “actively discriminate against gay people.” The ad (see below) was paid for by the Pennsylvania Leadership Committee, which is part of a political group supporting Democratic candidates.

Political ads can contain falsehoods and manipulated facts, but it might come as a shock to some that discrimination against LGBTQ people in most parts of Pennsylvania is still perfectly legal.
Pennsylvania has not updated its civil rights law to include nondiscrimination protections for LGBTQ people, despite calls to update the law from state Democrats, and rejection from state Republicans. The Pennsylvania Human Relations Act was last updated in 1997, and says that individuals or groups cannot be discriminated against based on “race, color, familial status, religious creed, ancestry, age, sex, national origin, handicap or disability, use of guide or support animals because of the blindness, deafness or physical handicap of the user or because the user is a handler or trainer of support or guide animals is a matter of concern of the Commonwealth.”

This means these protected classes, like Christians, Black people, immigrants, people with disabilities, etc., cannot be denied housing, employment, or public accommodation throughout Pennsylvania solely based on religion, race, national origin, and so on.

Some municipalities throughout Pennsylvania, like Allegheny County, Pittsburgh, Philadelphia, Erie County, Allentown, and others, have added “sexual orientation and gender identity” to their local nondiscrimination ordinances. Within those municipalities, discrimination against LGBTQ people is illegal, and evicting, firing, or denying LGBTQ people of public accommodation can lead to legal consequences.

The majority of counties in Pennsylvania, including most Pittsburgh-area counties (Armstrong, Beaver, Butler, Fayette, Washington, Westmoreland), it is still legal to evict or deny public accommodation to LGBTQ people.

According to an iVoterGuide submitted by Mercuri, the Republican candidate strongly agrees that “Governments should not discriminate against individuals, organizations or small businesses because of their belief that marriage is only a union of one man and one woman.”

Mercuri’s support for saying government shouldn’t intervene in allowing individuals, businesses or organization to discriminate against gay people means he disagrees with the laws of his own county (Allegheny) and the laws that apply to the district he is trying to represent, House Distirct 28, which resides fully in Allegheny County.

But outside of Allegheny County in Southwestern Pennsylvania, businesses that are places of public accommodation, such as hotels, restaurants, theaters, banks, and health clubs, can legally discriminate against LGBTQ people.

In 2018, Gov. Tom Wolf (D-York) added sexual orientation, gender identity, gender expression, gender transition, and transgender identity to the state Human Relations Commission guidelines. This means complaints can be filed on behalf of LGBTQ when they claim discrimination, but it’s not as strong as protections as changing the law. LGBTQ advocacy group Equality PA wrote in 2017 that change does “not take the place of comprehensive legislation in the state.”

Democrats, like state Rep. Dan Frankel (D-Squirrel Hill), have been fighting to get the state legislature to pass the Fairness Act, which would add LGBTQ people to the protected classes in the state’s civil rights law. Other efforts have also been introduced in the state Senate. But Republicans have been in charge of the state House and Senate for decades, and have consistently blocked the bill.

According to a 2017 poll from Hart Research, 56% of Pennsylvanians support making it illegal to discriminate against gay people in housing and employment, while only 25% oppose. The Pennsylvania Youth Congress last year launched public support campaign for nondiscrimination protections, which has garnered support from University of Pittsburgh, Giant Eagle, Alcoa, and other large institutions.

This year, some Democratic candidates are campaigning directly on this issue. Candidate Emily Skopov (D-Marshall) is running against Mercuri in the North Hills district. Today, her campaign sent out mailers to voters in Marshall, Pine, Franklin Park, and McCandless that say Mercuri believes "businesses should be allowed to discriminate against LGBT Pennsylvanians." 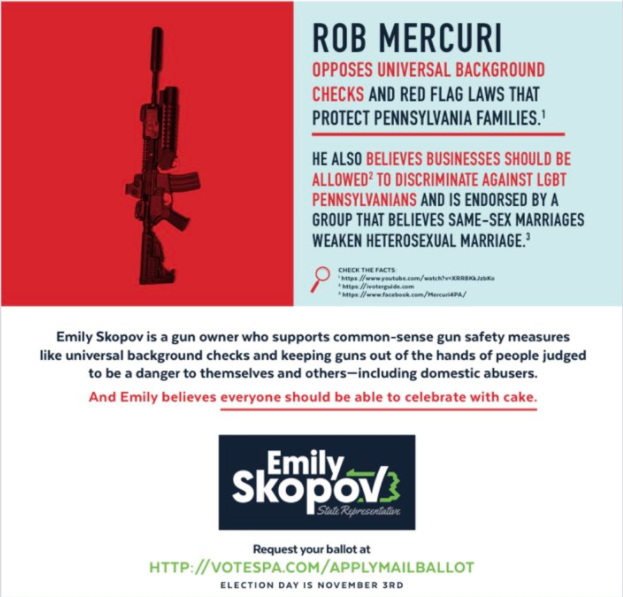