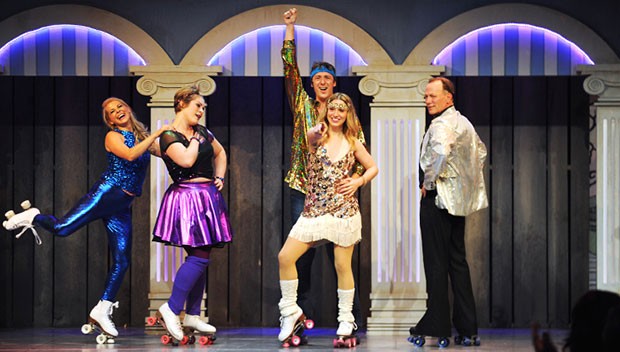 Photo courtesy of Matt Polk
The cast of Xanadu, at Pittsburgh CLO

Did you ever hear of the Razzies? They are awards given annually to the worst films of the year and were founded in 1980 specifically to “honor” the Olivia Newton-John/Gene Kelly musical disaster Xanadu. In 2007, Douglas Carter Beane created a satirical theatrical version featuring songs from both the film and Newton-John’s catalogue, and the show became a surprise Broadway hit. Now Pittsburgh CLO presents a scaled-down version in its Cabaret space.

In case you need to know, Xanadu is about Sonny, a struggling artist inspired by, and in love with, Clio, one of the nine Greek muses. Meanwhile, two of her sister muses and a property developer are on hand to thwart Sonny’s plans to open a roller disco.

CLO is leading a program developing small-scale musicals for venues like the Cabaret around the country. It’s not explicitly stated that this miniaturized Xanadu is part of that process, but, at least, it’s pointing the way.

Beane’s script is tricky; George Kaufman famously remarked that “satire is what closes on Saturday night,” and this production gets off to a rocky start indeed. I’ve seen the full-size version and remember just laughing and laughing at Beane’s non-stop barrage of jokes lampooning the movie, the ’80s and musical comedy itself. This go-round seems to have removed, not only a few cast members, but some jokes as well. It’s not until we’re well into the show that the humor starts flowing.

Once it does, though, the evening is just a lot of silly nonsense, ably directed by Kate Galvin with an enjoyably wacked cast.

Olivia Vadnais is a very determined Clio/Kira; singing, dancing and roller skating (!) like a seasoned pro. Reed Allen Worth, as Sonny, has got a big set of pipes which he uses to powerful effect. Tim Brady’s turn as the real-estate baron is about as shameless, and funny, as possible. Rounding out the cast are Lara Hayhurst and, especially, Drew Leigh Williams having the time of their wicked lives playing the bitchy, hammy evil muses. Musical director Catie Brown leads a non-stop tuneful band, and Britton Mauk has created the scaled-down glitzy setting for this scaled-down show.

Now Hiring: Jobs for plant and pizza lovers, plus more openings this week in Pittsburgh