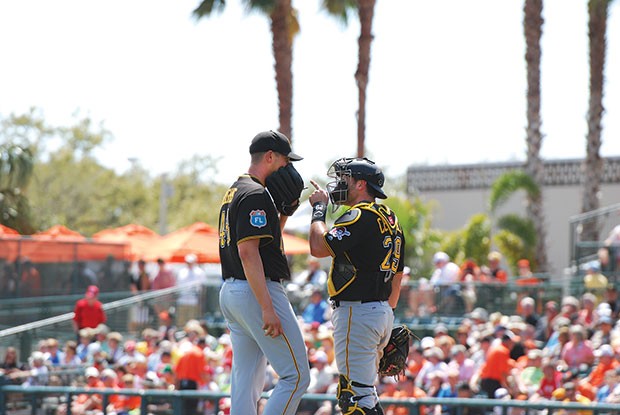 CP photo by Charlie Deitch
Pirates catcher Francisco Cervelli has a serious chat with pitcher Jared Hughes during a spring-training game last year against Baltimore.
Spring training is so close you can almost smell the underground performance-enhancing drugs that haven’t been deemed illegal yet.

The Cubs are world champions and Cleveland is the American League gold standard. So, yeah, there’s a weird feeling in the air as we head into the 2017 season. It’s been a boring offseason for the Pirates, except for third baseman Jung Ho Kang, who, since the start of the 2016 season, has managed more run-ins with the law (three) than sacrifice flies (two). Those three infractions are not the kind of “trip-trip-triple” you want. Kang definitely needs to start hitting more sacrifice flies and seeing the police less. But it’s too early to assess all of the team needs. Since pitchers and catchers report this week, let’s have a look at them.

The catching duo of Francisco Cervelli and Chris Stewart begin their third straight season together; that’s backstop continuity that’s almost unheard-of for the Buccos. In 2015, the two were dynamic; in 2016, they were just there. Two seasons ago, Cervelli hit almost .300 with seven home runs, while Stewart had a singles-heavy .289 average and drove in 15 runs. Last season, Cervelli’s average dropped 30 points, and he had just one home run and 10 fewer RBI. Stewart’s average dropped a whopping 75 points, and his RBI total was halved. On a “positive” note, his one home run did tie Cervelli for the team lead in home runs by a catcher. Third-stringer Elias Diaz is still waiting for his breakthrough, but at 26 he’s not the cutest puppy in the pound anymore. Hopefully Diaz will find a loving home.

There wasn’t a major revamp of the pitching corps this off-season. The re-signing of Ivan Nova was the biggest winter move the front office made. He’ll be the No. 2 starter between ace Gerrit Cole and future ace Jameson Taillon. Ryan Voglesong left for the less-green pastures of Minnesota and became a former Pirate once again. He had some moments, but Voglesong 2.0 never really caught fire. The Jon Niese experiment (we got him in exchange for Neil Walker) failed, and Francisco Liriano was sent to Canada before the trade deadline last year.

Cole took a step back in 2016 and endured the worst season of his respectable four-year career. He had win totals of 10, 11 and 19 in his first three seasons before notching just seven last year. With a healthy season and some arbitration-eligible years on the horizon, look for Cole to regain his dominant status in the next year. Every star has a mulligan season sometime in his career, and Cole’s really wasn’t that bad; it was mostly due to injury. Cole is still an incredible pitcher, and at some point, he’s going to command a paycheck with lots of extra commas and zeroes, so enjoy him while he’s here.

Now that the New York Yankees are becoming a Pirates farm team (instead of the other way around for once), Ivan Nova is here for three more years. Nova won 12 games last year between the two clubs and solidifies the top half of an otherwise questionable rotation. And we finally got to see Jameson Taillon in 2016. He won five of nine decisions and baffled major-league hitters with his diagonally breaking curveball. It’s better stuff than Charlie Morton ever had. The second overall pick in the 2010 MLB draft, Taillon comes to Bradenton to prepare for his first full season. No pressure on him to make the team, he’s clearly in the rotation. Tyler Glasnow and the pleasantly surprising Chad Kuhl are the favorites for the final two starting spots. Steven Brault is the long-shot third-party candidate.

It just won’t be the same in the bullpen without Neftali Feliz and Wilfredo Boscan around anymore. Feliz had his moments and was rewarded with a contract in the baseball purgatory of Milwaukee. Nobody’s favorite closer, Tony Watson, now sits at the head table in the Pirates pen. The Mark Melancon understudy didn’t experience the success he’d had in the set-up role, but he has some pretty good arms behind him. That includes crazy-armed Felipe Rivero, who had more than 90 strikeouts in just more than 70 innings. Veterans Juan Nicosia and Antonio “Old Dirty” Bastardo return, along with Jared Hughes. Plus, big free-agent signee Daniel Hudson joins the team. Arizona was his last stop before signing with the Bucs. The liberal media paid scant attention to the deal; even more ignored was the signing of Wade LeBlanc last year. A.J. Schugel has the inside track on the last spot in the bullpen.

wSo let’s forget about last year, the Pirates’ first losing season since 2012. Let Cleveland, yes, Cleveland, be our inspiration. That team had no more talent than this Pirates team. The Indians had 36-year-old former Pirate Rajai Davis on their roster and really only one good starting pitcher in Corey Kluber. We envy Cleveland for once; wouldn’t it be great to lose a World Series? Just to be in it? We’ve dealt with the heartbreak of big losses before. Sure, the Pirates haven’t lost a World Series since 1927, but we can handle the grief. If Cleveland can go, anybody can go. If the Cubs can win the World Series, then truly anyone can. Except maybe San Diego; it’s probably the only team to enter spring training realizing it’s already over.