Wysocki: Pittsburgh needs to step up its college-basketball game

In Pittsburgh, the two best teams in college basketball this season are the Carnegie Mellon Tartans and the LaRoche Redhawks 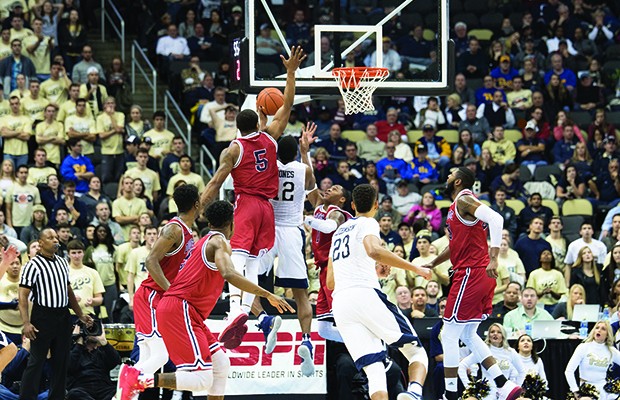 CP photo by Luke Thor Travis
The Duquesne Dukes might have peaked too early by beating Pitt at the beginning of the season.
As the 2016-17 college-basketball season heads toward its conference tournaments, the regular-season report cards are in. And looking at the scene as a whole, one thing is clear — Pittsburgh needs to step up its college-basketball game.

Carlow, Robert Morris, Point Park and Duquesne all have losing seasons. Pitt is around .500, but its final five games are against two ranked teams; three of those games are on the road; and the five teams they’ve yet to play have a record of 91-39. We live in an upside-down sports world where two of the four world champs are a team from Cleveland and the Cubs. In Pittsburgh, the two best teams in college basketball this season are the Carnegie Mellon Tartans and the LaRoche Redhawks. The natural order of things is topsy-turvy.

Starting from the bottom, the Carlow Celtics get a pass because their program is still in its infancy. They’re only 3 years old, so don’t make fun of them. But a 4-24 record is tough to look at no matter what your age. The Celtics did manage a win over Point Park to produce the highlight of the season. The low point was a season-opening 47-point drubbing at the hands of hated Mount Vernon Nazarene University.

The Robert Morris Colonials’ biggest win was over Duquesne, right after Duquesne’s biggest win, over Pitt. Robert Morris has struggled, but it’s not afraid to play much bigger schools. Penn, DePaul, Richmond, Kansas State and Virginia were all on the Colonials’ non-conference schedule. They didn’t win any of those games, but Bobby Mo will be better in the long run for having faced that competition.

Not much better news comes out of Point Park. A three-point win over No. 7 (in the National Association of Intercollegiate Athletics Division 1 rankings) Indiana University East was the best game for the Pioneers; there were few others. The low point was an unholy 46-point beating at the hands of Ohio Christian University, and a forgettable season was summed up by a loss against Carlow.

The two most exciting college-basketball players to watch both play at the Palumbo Center. Mike Lewis II and Isiaha Mike are the kind of players who can move Duquesne to the next level. But, the Dukes can’t seem to find their way up the standings of a very competitive Atlantic 10 division. Duquesne wants to be where Virginia Commonwealth and Dayton are. Dayton is led by coach Archie Miller of the Blackhawk-area Millers — his brother Sean is the head coach at Arizona — so you’re welcome, Ohio. By the way, Mike and Lewis II are only freshmen.

A team of recruits playing for a guy who didn’t recruit them, while learning a new system in the ACC, is not a blueprint for a great season. That’s what the Pitt Panthers are facing. It was a confusing season marked by losing the City Game, but beating a very good Virginia Cavalier team. Then came the Louisville massacre — no relation to the Bowling Green Massacre, because this one really happened — where Pitt lost by 55 points. Coach Kevin Stallings is an unenviable position; the ACC is relentless and it will take time to implement his system. I’m sure Pitt fans will be patient.

The good news, finally, is that coach Tony Wingen’s Carnegie Mellon Tartans are hot right now. For the third consecutive season, the Tartans have set a new team record for three-pointers. At least somebody is making it rain in Oakland these days. Wingen won his 300th game in January, and holds the school record for most wins by a basketball coach. The Tartans will finish with a winning season; they just need some more attention. Other universities have former students who are celebrities draw notice by attending home games. Carnegie Mellon has lots of famous former students. Where are you Ted Danson, or Joe Manganiello, or George Romero, or Squiggy from TV’s Laverne and Shirley?

The best report card goes to the LaRoche Redhawks: Coach Hermie Carmichael has his team 10 games over .500. In the less-celebrated City Game, LaRoche defeated Carnegie Mellon 66-61. Carmichael has coached the Redhawks to three conference tournament appearances in his first five seasons. Under him, they even appeared in the semifinals of the Allegheny Mountain Collegiate Conference. At least somebody is winning college-basketball games in this town.

Local teams won’t be making a lot of noise in the upcoming madness of March. But Pittsburgh is hosting the Atlantic 10 Conference Tournament from March 8-12 at the Paint Bucket. Go see Duquesne, VCU, Dayton, Richmond, George Mason and St. Bonaventure. All that good basketball will make you forget the bad stuff.

Miller Institute for Contemporary Art explores bounds of tech and humanity with Paradox: The Body in the Age of AI