Our city has plenty of sports mascots ranging from the beloved to the kind of annoying. 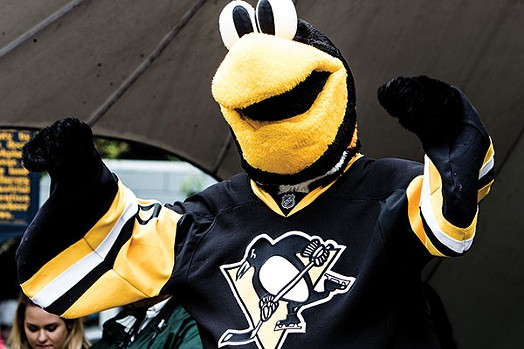 It’s almost impossible not to love mascots. They’re fun, furry, gregarious and have an incurable optimism. People who don’t like them probably don’t like America either. Mascots serve as team cheerleaders and temporary babysitters for kids and even add enjoyment to the game. Our city has plenty of sports mascots ranging from the beloved to the kind of annoying. So as you take in a game of any sport this year, here is a rundown of our city’s finest, sorted by age.

Roc the Pitt Panther. Although he adopted the name Roc in the 1990s, the Pitt Panther is the oldest of the Pittsburgh mascot fraternity. He began his career in 1909, so his enthusiasm for all Pitt sports is even more remarkable considering he is 107 years old. Roc was named after Steve Petro, a former student and coach, not the short-lived TV series starring Charles S. Dutton, just to clear up any potential confusion.

Black Diamond the Bison II. BDB began representing Point Park in 1967. He was an actual live mascot that roamed fields of South Park while not on duty. Even though Diamond is no longer with us, his legacy remains with the Pioneers. And the Bison is making a comeback: It was just named the official mammal of the United States. Man came in second, probably rightfully so.

Pirate Parrot. The Parrot turns 37 this year and is probably the most recognized and beloved of all the mascots. Despite its rather checkered past, we love the Parrot. In the 1980s, the Parrot got caught up in the Pittsburgh cocaine scandal. We forgive him because he was young at the time and liked to party. He probably went to discos in a wood-paneled station wagon and feathered his hair too; it was just a reflection of the times. Nice to see he’s all grown up now.

Iceburgh. The only mascot in the list with an entry on the Internet Movie Database, thanks to his performance in Sudden Death. He co-starred with Jean-Claude Van Damme in the epic thriller filmed in his former Igloo. Iceburgh is very friendly, and photogenic as well. He got a little handsy — or flippery, I suppose — with my girlfriend at the last Pens game we went to. But I figured I would sound crazy if I were jealous of a penguin, so I let it go.

Duquesne Duke. He was introduced in 2003, replacing the mildly popular Duke the Bear. He is a striking mascot that stands 7 feet tall and is impeccably dressed. He exudes confidence and even wears a top hat. The classiest of the bunch by far; every Dukes’ game seems like a formal affair.

RoMo. The Robert Morris mascot has the hippest sounding name, but other than that, he’s pretty unspectacular. His likeness to Robert Morris himself is questionable at best, but he’s still a better mascot than the one at Robert Morris in Illinois.

Scotty the Scottie Dog. A live mascot since 2007, Scotty has become a beloved fixture on the Carnegie Mellon campus. He was given to the university by a celebrity from The Cosby Show. (It was the Huxtable who shall not be named, but moving on …) Despite Scotty’s scandalous beginnings, he has done nothing wrong; he’s a good boy, yes he is.

Steely McBeam. You would think that the most beloved organization would have the most beloved mascot; not true in this case. Steely McBeam is celebrating his ninth birthday this year, and we still haven’t wholeheartedly accepted him. Maybe it’s his fake Irish upbringing that makes him a little rough around the edges. He looks like Bill Cowher had a torrid affair with the mascot from the Purdue Boilermakers. Steely once interrupted a standup comedy show I was doing at Pitt. I noticed a disturbance halfway through a mediocre joke, and it was Mr. McBeam rudely interacting with students. C’mon Steely, I don’t come down to the construction site where you work and knock the beam out of your hand. Steely still has a lot to learn, but he’s only 9.