"What about the mother whose kid ran away on the day of that battle?" 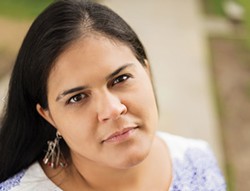 As accolades go, however, a holiday is just another book on the shelf for Ramirez.

In June, in New York City, she received the PEN/Fusion Emerging Writer's Prize for her unpublished essay collection, Dead Boys. The award, including a $10,000 cash prize, "recognizes a promising young writer of an unpublished work of nonfiction that addresses a global and/or multicultural issue," according to PEN America's website. Ramirez is the first-ever winner.

"I sort of enjoyed toiling in obscurity because there was less pressure to get stuff done," she says, chuckling.

Her essays explore the violence surrounding the ongoing drug wars in her native Mexico and ancestral Colombia. Ramirez tells personal stories of the individual dead to illuminate the political and economic problems that feed such brutality. She connects these stories to violence in Pittsburgh and to the loss of her own brother when she was 5, probing our shared reactions to death.

"So much of history is ‘this happened on this day' and ‘this charge was led by this general,' but what about the mother whose kid ran away on the day of that battle ... or somebody who died of something completely unrelated on the same day? These are the alternate world histories that allow us to get at the emotional truths of what's happening."

With Dead Boys and much of her other work, Ramirez hopes to start conversations on situations south of the border that she feels are being ignored by the mainstream public. "We [in the U.S] are so tied up in other people's business economically that you cannot deny our implicit cooperation in these screwed-up systems," she says. "It amazes me how disconnected everyone can be — in every country around the world — from the things they just don't want to see."