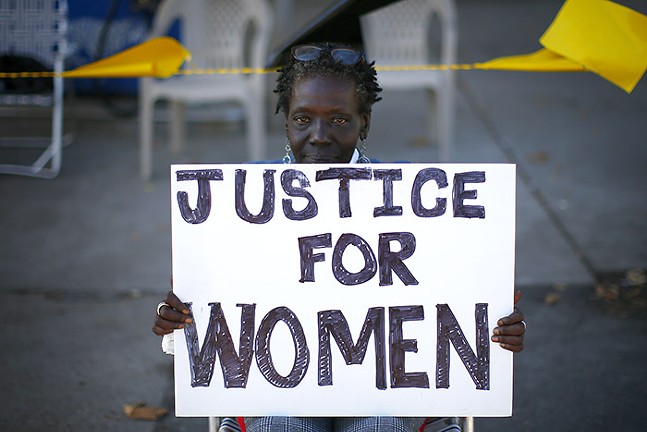 “Black women are the best invention on earth.” This firmly held belief I keep in my head, spirit, and heart in order to navigate the world, I recently said out loud to a former colleague. This person, a white man, exclaimed, “Oh, I have never heard that before.”

Of course he hadn't. Where on this green-blue capped Earth would someone hear that Black women are the best creations? OK, arguably water or gravity is, but my intention, my albeit human-centric argument, was that the original woman, who came to be known as African woman, later known as Black woman, is the best invention.

I had hoped my City Paper columns would show the importance of Black Girl Joy. Even with time to pause and talk, real talk, about the special challenges of being a Black woman in Pittsburgh, I didn’t want this column to be a catalog of Black Girl Pain.

But here we are, in the aftermath of the much-discussed University of Pittsburgh report titled “Pittsburgh's Inequality Across Gender and Race,” which was quickly followed by the horrific assault of two Black women customers at a local gas station. This capped a week of discussion leading with “Pittsburgh is the worst place to be Black,” and “for the first time ever” skin color was connected with gender — which was not, in fact, the case. Earlier University of Pittsburgh studies, Black women-led organizations, and anyone listening to Black women would have known it was not, in fact, the first time.

However, there is a tendency to talk about the African American as a male experience and the woman’s experience as being white — this mindset is literally killing Black women in America, in Pittsburgh.

Ignoring Black women, including, it seems, a group of Black researchers who could have written this report, is evidence not taken into account. And my own “anecdotal” evidence, aka my own damn life, has been dismissed consistently. Over social media, a data-statistically focused analysis told me that I am “not an average Pittsburgher," implying that I do not count for much in the telling of Pittsburgh.

Question: What would you do if you lived in the worst place to be you?

The reaction to this report was interesting, funny-not funny, disappointing, gaslighting, heartbreaking, affirming, and a myriad of other complex feelings reflecting the reality of being Black woman in Pittsburgh.

There was the inevitable “Well, it is bad everywhere” response, which somehow in the 21st century means we are powerless to do anything about it – the hope spring is dried up due to the climate crisis.

Then there's the white liberal "Sorry, it sucks to be you, tell me all about it (you have 15 seconds)” reaction. This is just enough time to seem to care before they go back to centering and celebrating whiteness. Then there's the white conservative, “I want to hear about this alleged report.” This group actually gives more than 15 seconds to the report, like hate-watching a show on Hulu.

Oh, and I forgot the optimistic white liberal reaction of “Maybe THIS will be the report to make a difference.” Without having a personal history or interest in anti-racist activism, there’s that 15 seconds again. The Black 'n' Gold flag-waving white Pittsburgher who has remained silent — their money is made on the “A Most Livable City” ruse.

There is the all too rare anti-racist white person who knew this to be true already, shared the report by mainly retweeting the words of Black people — Black women first.

Then there was the “Should I stay or should I go?” battle among Black Pittsburghers. The shame of leaving, the pitying of those who want to stay. The “self-righteous” stay-camp, the “selfish” go-camp. The “self-preserving” go-camp and optimistic “we-built-this-city” stayers. Which also meant Black folks were arguing among ourselves (again) instead of looking at the systems, policies, and people responsible (again).

But there were also thoughtful and open conversations among Black women and men about the report — some in person and some online. There was some good analysis and critique — hopeful and calming, as well as some support from other People of the Global Majority. It felt like family.

Question: What would you do if you lived in the worst place to be you?

There was gaslighting by some Black men who were unable to sit out of the conversation for one minute and say, “Well, sisters, we want to hear from you.” The men who spent their energy shutting down the voices of Black women. Here was a chance to center Black women, but overall, that did not happen enough.

There were the text threads, conversations, and discussions among Black women and femmes that would best be summarized by the Oprah meme with the W-shaped arms up, head tilted: “We’ve been saying this for years.”

Even if you don’t gang up on us, hit us in the back with your own fists or kick us on the ground with your own feet. In many ways you are, because my Dear Pittsburgh, place of my birth, but hopefully not place of my death, you provide the energy for that fist to punch and that foot to kick our beautiful, important, and valuable Black lives.

It makes it difficult for someone, even for some Black women, to see our value as humans, as women — it makes us easier to hurt us.

And Pittsburgh, you are hurting us. You are not protecting or listening to Black women. Maybe this time it will be different. However, I do not know how much more time or patience or energy I have to find out. Would you?