When it comes to a global zombie pandemic, Brad Pitt is Mr. Fix-It 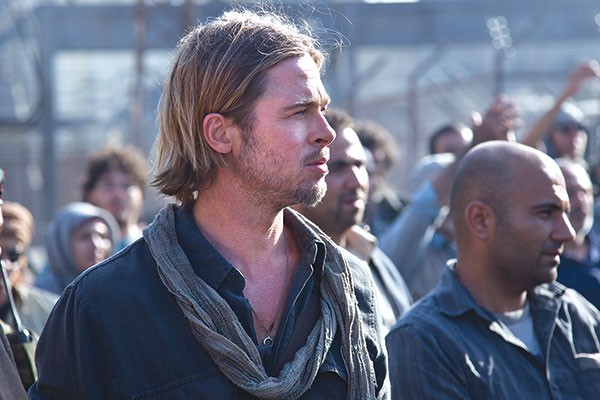 Zombie-hunter Gerry (Brad Pitt) ponders his next move in saving the planet.

It' s fair to say that among the persistent scourges of the past half-century are various forms of zombie. At least in popular entertainment. Now, in Marc Forster' s World War Z, the undead acquire true global dominance, running amok in all four corners and forcing the few living humans left to end the madness ASAP.

Forster borrows the title, the central concept and a scene or two from Max Brooks' book, but the tale has been re-written. (The book, an oral history compiled from hundreds of witnesses, is largely unfilmable.) The story is now one globe-trotting man' s experience searching for the cause of, and solution to, a planet full of voracious people-eaters

That man is Gerry Lane (Brad Pitt), a former U.N.-danger-zone dude. He is a multifaceted hero: a great dad, husband (he calls home even when fighting zombies), field medic, co-pilot, amateur public-health expert, schmoozer (a little Mossad name-dropping never hurts), and so on. He looks great in an artfully tossed man-scarf, his hair highlights are perfect, and thus, it seems perfectly plausible he can single-handedly save the world.

World War Z is the Brad Pitt Show. Mireille Enos (TV' s The Killing) has the thankless role of the hero' s wife who stands by looking worried and minding the children, but it' s pretty much an all-men-doing-things movie. There' s a kick-ass Israeli soldier (Daniella Kertesz), but she' s boyish enough to be gender-neutral. A few familiar faces show up in what are extended cameos: James Badge Dale, Matthew Fox, David Morse and Peter Capaldi.

The film is rated PG-13, so in theory, it' s a zombie epic you can take the whole family to. It' s pretty low on gore, bone-gnawing and zombie eviscerating (the man-on-zombie violence is several notches below TV' s Walking Dead). On the bummer side: A small dog is imperiled and the body count is in the billions.

For much-hyped features this summer, the bar is pretty low — and who doesn' t wish that bar was open? A few scenes do deliver the nervy thrills that viewers demand, even as they strain credulity: a crisis-establishing traffic jam (buh-bye, Philly!), the fortress of Jerusalem turned into a trapped-humans buffet, and the Worst Plane Trip Ever. World War Z is a fair popcorn-munching movie, but it doesn' t bring anything new to the cliché-ridden action and zombie genres it' s leaning on. Also, I saw it in 3-D and never even noticed: Save your cash for extra vaccines at the snack bar.