The three-day-long event running from Fri., June 11-Sun., June 13 will transform Market Square with the “sights, sounds, and cuisine of the international and immigrant communities of Pittsburgh,” according to a press release. Visitors can expect hand-crafted items, prepared foods, live entertainment, and much more from local restaurants, businesses, and performing arts groups.

The World Square will coincide with the Three Rivers Arts Festival taking place from June 4-14.

“World Square aims to help build connections through an entertaining and immersive experience that highlights the diversity of the various communities that call Pittsburgh home,” says Feyisola Akintola, Special Initiatives Manager for the City of Pittsburgh. “We have such a vibrant immigrant, refugee, and international community in Pittsburgh. It’s really exciting to have representation of these diverse cultures, different foods, cultural performances, and musical acts, and bring them to increasingly engaged audiences in a positive and accurate way.” 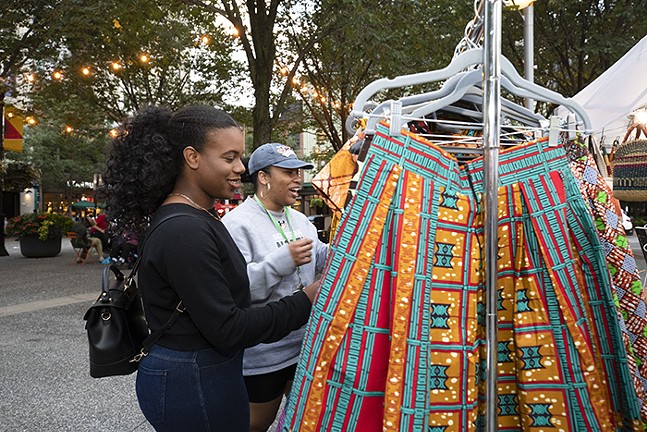 Courtesy of Pittsburgh Downtown Partnership
World Square in Downtown Pittsburgh
The event was initially launched in 2019 as part of Welcoming Pittsburgh, an initiative by Pittsburgh Mayor Bill Peduto to “better support and integrate Pittsburgh’s immigrant and refugee communities.”

“Celebrating our rich immigrant cultures and providing opportunities for them to inform our community about the diversity and energy that help shape our city and has never been more important than now,” says Peduto in a press release. “We’re thrilled to see the return of this event Downtown, and to recognize and celebrate the cultural expressions of our international neighbors.”

Various community organizations worked to create World Square, including the Pittsburgh refugee resettlement nonprofit Hello Neighbor, the Pittsburgh Hispanic Development Corporation and the Pittsburgh Metropolitan Area Hispanic Chamber of Commerce, and the University of Pittsburgh Program for Immigrants, among others.

Among the festivities at World Square are a variety of foods from around the globe, including Mexican cuisine by Alquisiras Restaurante y Paletería, Peruvian eats by Pisko Peruvian Gourmet, and “delicious dishes from Afghanistan” by Zafaron Afghan Cuisine. There will also be goods from Authentically African by Moa, Costa RicART, Can Call Me YOKO, and more, as well as performances by Pittsburgh Samba, Oladayo, Geña y Peña, Alba Flamenca, Naina Kathak Dance Troupe, and others.

As mask mandates and other COVID-19 precautions have started to relax as the number of vaccinations continues to increase, PDP hopes World Square will attract crowds and provide an “extra boost” to the vendors, many of whom faced “serious challenges throughout 2020.”