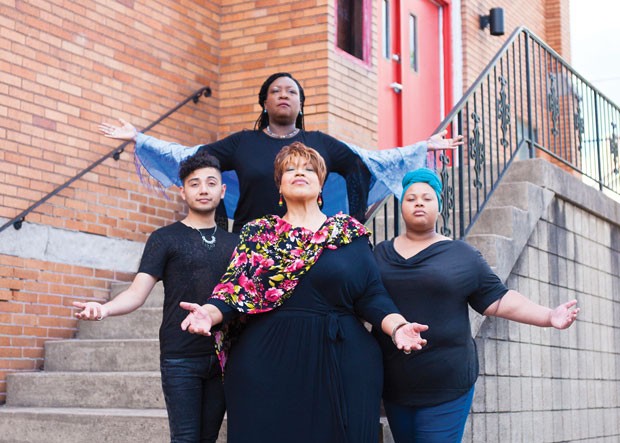 Tameka Cage Conley grew up in Louisiana, in a religious household where the dead were known to commune with the living. “There was definitely a belief in the spirit world when I was growing up. That spirits can come back and visit you,” says Conley, who was raised Baptist, with a Pentecostal grandmother. “I was always terrified and intrigued by this idea of people not staying dead. The idea of the spirit being stronger than the flesh.”

That idea vividly informs A Gathering of Sons, the opera that premieres this week at Pittsburgh Festival Opera (formerly Opera Theater SummerFest), with a libretto by Conley. The jazz-gospel opera, with music by Pittsburgh-based composer Dwayne Fulton, confronts an issue that Conley, as an African American married to a black man and the mother of a 3-year-old son, finds inescapable: police brutality.

With characters who are the supernatural embodiments of earth and sky, and the spirits of the departed, among other magical-realist elements, Gathering of Sons promises a different kind of social-justice story, says the show’s director, Mark Clayton Southers. “By dealing with the spiritual world, I think [Conley] goes beyond the [victims’] mothers being interviewed on TV,” he says. “We become numb to the violence. She taps into the afterlife. … I think she taps into another realm.”

Gathering of Sons is the second commissioned work in Pittsburgh Festival Opera’s Music That Matters series, which began with 2015’s eco-themed A New Kind of Fallout. The shows complement the troupe’s more traditional offerings with works that speak directly to contemporary audiences. To create a social-justice-themed opera, in 2015 artistic director Jonathan Eaton turned to Conley, a rising Pittsburgh-based poet and playwright whose work often tackles such issues, and Fulton, a studio musician, composer and Minister of Music at Larimer’s Mount Ararat Baptist Church.

Conley (now a fellow at the famed Iowa Writer’s Workshop) crafted a story about what happens when a predatory white cop named Lockdown profiles and shoots a young black man named Victor even as Victor’s older brother, a cop named City, and his wife, Violet, are expecting their first child. Other characters in the large cast include the spirit of that unborn son; Victor’s mother, Victoria; the spirit of Victor’s late father; and, perhaps most strikingly, two choruses, one consisting of the spirits of African-American men and boys, the other including elemental but otherworldly figures including The Speaking Earth, The Sky That Can’t Stop Seeing, The Waters and The Blood. And then there’s Glock — Lockdown’s gun in forbidding human form.

Conley’s libretto is sometimes lyrical, sometimes poetically direct. “What I got is magic. And if you want it, you gotta kill me,” Victor tells Lockdown. “The shock of me fills the room,” announces Glock. Fulton’s score, combining elements of jazz, classical and gospel music, will be played live by a seven-piece band.

Seven performances of Gathering of Sons are planned; the first five comprise an in-city “tour” that takes place before Festival Opera’s official opening night, July 1. “Let’s not just expect people to come to us, we’ll go to them,” says Eaton. The first two shows are at Mount Ararat church, with a third at Oakland’s Rodef Shalom synagogue, and two at the Kaufmann Center, in the Hill District. (The July 1 and 8 shows are at Festival Opera’s home base, the Falk Auditorium at Shadyside’s Winchester Thurston School.)

With its strong pedigree, Gathering of Sons is artistically promising. The jazz/gospel score, with lyrics in English, also makes it accessible. The subject matter is ripped from the headlines, and the approach is healing and hopeful. Yet attracting nontraditional audiences is opera’s perennial challenge. Gathering was developed partly via a series of free public workshops at area community centers, libraries and churches, and feedback solicited from attendees including community leaders. But will the label “opera” still keep people away?

Maynor, based on his experience with Trilogy, says outreach is key, even at the performances themselves. “You have to teach people how to watch and listen,” he says. Denise Sheffey Powell, the Pittsburgh-based performer who plays Victoria, says that this opera’s grounding in the black spiritual tradition will help bridge the gap. “I think the majority of the audience will really understand that,” she says. “It will get people talking … and open up discussions about what needs to be done.”