Workshops, lectures, and performances by local and national acts round out Blues and Heritage Festival | Music | Pittsburgh | Pittsburgh City Paper

Workshops, lectures, and performances by local and national acts round out Blues and Heritage Festival 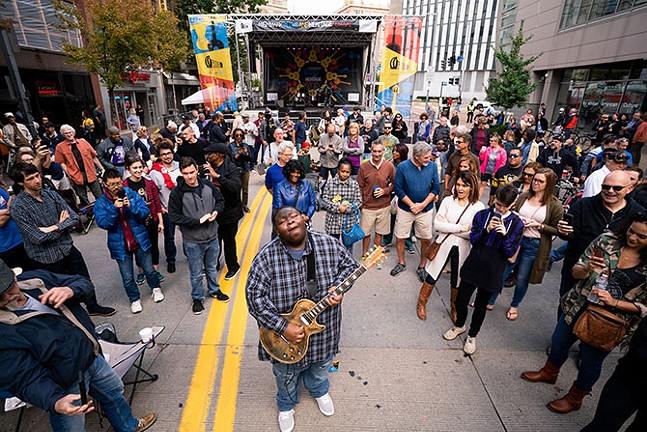 When asked to explain the inspiration behind his body of work showing African-American experiences during the 20th century, August Wilson cited the four Bs: painter Romare Bearden, writers Amiri Baraka and Jorge Luis Borges, and lastly and most influential, the blues.

“I chose the blues as my aesthetic," Wilson said in a 1996 Playbill article. "I create worlds out of the ideas and the attitudes and the material in the blues. I think the blues are the best literature that Blacks have. It is an expression of our people and our response to the world. I don't write about the blues; I'm not influenced by the blues. I am the blues.”

Blues not only influenced Wilson’s writing — found in the lyrical prose of the characters and their honest, sometimes humorous ideals and attitudes — it was found throughout his plays, with characters singing and listening to it. So, for the August Wilson African-American Cultural Center (AWAACC), it only made sense to start the Blues and Heritage Festival, taking place Downtown from Sept. 20-22.

“There hadn’t been a blues festival in the city of Pittsburgh for many years,” says Cydney Nunn, public relations and marketing manager at AWAACC. “Along with Highmark, [we] wanted to fill that void.”

“We wanted to make sure the festival was accessible to the community, so keeping the majority of the festival free was imperative.”

Kicking off the weekend is the Taste of Blues Party on Friday. Local restaurants — Eddie Merlot’s, NOLA, Wolfie's Pub, Fogo de Chao, The Capital Grille, and more — are providing BBQ-inspired samples of their dishes, while Billy Price Band, Cash Box Kings, and Lyndsey Smith with Steel Town Horns round out the night.

“We wanted to make sure the festival was accessible to the community, so keeping the majority of the festival free was imperative,” says Nunn. “The two ticketed shows offset the cost of bringing two headlining artists in town.”

The festival had a similar model in its first year, but had two ticketed shows on Sunday instead of one, and many of the performances took place inside the AWAACC.

“Last year showed us what will work and what won’t,” says Nunn. “It’s a new festival, so our audience is still growing. We determined having one full day of free outdoor performances would be more realistic as the city gets familiar with this festival.”

Nunn says this year’s Blues and Heritage Festival will have more free outdoor performances, more food, and more cocktails. There is also an educational component taking place before the festival called Blues in Schools where local musician Eugene Morgan visits four schools — Propel, Urban Academy, and Braddock Hills — and educates elementary and middle school students about the origins of blues.

Developed by African Americans in the South during the 19th century, blues was first recorded in the 1920s and quickly spread across the U.S. The genre is considered to be one of the most significant musical forms in American history, its influences felt in jazz, rock and roll, R&B, and hip hop. But blues in its original form doesn't necessarily always get the spotlight it deserves — an imbalance the festival is hoping to correct.

“We hope for our audiences to continue to grow and really make blues more prominent in the City of Pittsburgh as well as continue to give a platform for artists from our region to display their talents on a national stage,” says Nunn.