Works of embedded Civil War artists at the Frick 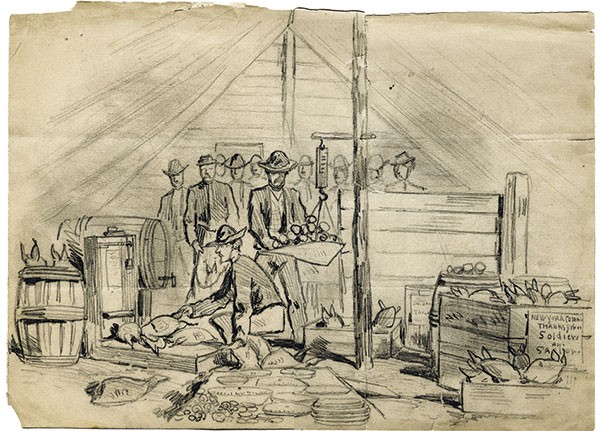 Image courtesy of the Becker Collection.
Joseph Becker's "Distributing Thanksgiving Favors to the Soldiers of the Army of the Potomac During the Siege of Petersburg, November 24, 1864."

These days, anyone can (and often does) take numerous pictures of anything. But during the Civil War, getting images from battlefields required skilled illustrators (notwithstanding the pioneering work of photographer Mathew Brady. The works of these embedded artists are the subject of Civil War Era Drawings From the Becker Collection, a touring exhibit now at the Frick Art & Historical Center.

The Becker Collection is named for Joseph Becker, a Pottsville, Pa., native born in 1841. He never had any formal artistic training, but newspaper mogul Frank Leslie could discern his artistic potential, and assigned him to follow the Union Army and produce illustrations of what he saw.

More than 80 of these drawings saw print in Frank Leslie's Illustrated Newspaper. Becker was right in the thick of Gettysburg and on the scene four months afterward for Lincoln's legendary dedication. He would later manage the publication's art department until his retirement in 1900. He died in 1910.

The works of artists like Becker gave rise to the triumphant reign of weekly illustrated publications — Frank Leslie's, Harper's Weekly, Collier's Weekly, etc. — that dominated American media for decades. In today's world, any news junkie with web access can obtain gratification about as fast as light travels. But during the Civil War epoch, people largely relied on weekly publications to keep them abreast of national news. Illustrated weeklies shaped America's cultural landscape. They covered the big events, uncovered the big scandals and were the main forum for public discourse and creative expression.

Civil War Era Drawings was curated by Judith Bookbinder and Sheila Gallagher. The exhibit's illustrations — many of them rendered in graphite and charcoal — are not just of the battlefront. Rather, a wide range of other subject matter is explored: soldiers amusing themselves in camp; prayer meetings; and army washerwomen keeping uniforms as clean as possible. Though Becker is the exhibit's primary artist, he is not the only one; others include Frederic Schell and Edwin Forbes. A standout illustrator is Andrew McCallum, who deftly captures the drama of a night attack on the city of Petersburg, Va.