“To be able to say that I helped rebuild Pittsburgh is an amazing feeling.” 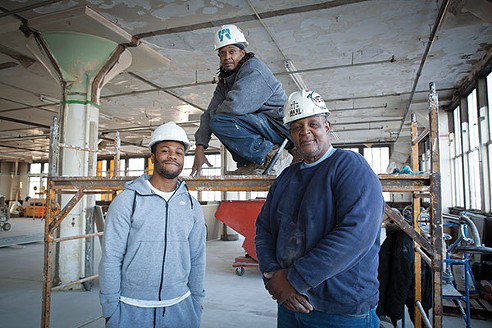 Photo by Heather Mull
CEA construction instructor and Ma’at foreman Johnnie Comer (right), standing with Homewood natives Woody Yates (center) and Adrian Foster (left), on one of the floors they are remodeling at the 7800 Susquehanna Street warehouse renovation project.

Rashad Byrdsong drives around back streets of Homewood until he stops at the 7000 block of Monticello Street. Abandoned structures and vacant lots sit next to a handful of well-kept homes. Kids, just out of school at nearby Westinghouse Academy, walk down the street.

Byrdsong, president of the Community Empowerment Association, a neighborhood-advocacy group, says this is one of the more violent sections of the area. Several shootings have occurred here just amid a three-house cluster; a bullet hole is still visible in one of the windows. Behind this group of homes is a structure that looks dangerously close to collapsing entirely.

“This house is reflective of hundreds of homes like it in Homewood,” says Byrdsong. “It is almost like these conditions are considered ordinary in the neighborhood.”

“Homewood has the highest number of shootings and gun-related deaths in Pittsburgh,” wrote Burgess. “Homewood also has the city’s largest number of vacant, abandoned and tax-delinquent properties. There are no grocery stores, no drugstores, no clothing stores and no name-brand store of any kind.”

But things are starting to turn around in Homewood. Development projects are slated for the once-neglected neighborhood, including a 40-unit apartment complex and the new state-of-the-art Animal Rescue League shelter, bringing hopes of economic vitality that could combat the neighborhood’s drug and violence problems.

And Byrdsong, who himself was formerly incarcerated in 1992, wants to ensure that people from the neighborhood and all disadvantaged workers get to share in any future prosperity. That is where CEA’s Workforce Development Training comes in. The 9- to 12-week program teaches trainees skills in the construction, hospitality, manufacturing, retail, health-care and landscaping industries.

Byrdsong says he has been particularly focused on ensuring that minorities and disadvantaged laborers, like those with a criminal record, are given opportunities to contribute to Homewood’s current construction revival.

“We continue to fight this fight to get more minority participation,” he says. “That is why guys like me have to holler and scream to tackle this issue.”

Byrdsong questions whether some of the construction projects are living up to their Section 3 requirements. Federal law requires that projects receiving funding from the U.S. Department of Housing and Urban Development provide job training, employment and contracting opportunities for low-income residents in connection with projects in their neighborhoods. Byrdsong is skeptical this law is being enforced in all city projects, so he is taking matters into his own hands with the workforce training program.

Many CEA workforce-training graduates find jobs directly with Byrdsong’s own construction company, Ma’at Construction Group. Eighty-five percent of the construction workers on the new Homewood Station senior-living facility, which recently popped up right across from Homewood’s busway stop, were African-American, according to Byrdsong. His organization was part of that effort and is also currently renovating a vacant 1920s-era warehouse at 7800 Susquehanna St., in Homewood.

The warehouse was purchased in 2013 by Bridgeway Capital, a nonprofit developer, with the goal of repurposing “an underutilized commercial asset into a platform for economic renewal in the Homewood community,” according to the company’s website.

Johnnie Comer, a CEA instructor and Ma’at foreman for the Susquehanna site, says that Bridgeway was instrumental in helping trainees work on the site and even allowed Ma’at to bill extra time to accommodate newly trained workers who took a bit longer to complete projects.

Bridgeway was happy to work with Ma’at and some of its trainees. In a written statement, Bridgeway CEO Mark Peterson told City Paper: “We appreciate the quality of work Ma’at Construction Group brings to 7800 Susquehanna Street. Their high level of workmanship and community focus supports positive growth in Homewood. Rashad Byrdsong and Johnnie Comer understand the mission of 7800, and we hope we can help them participate in other large construction projects that are rapidly developing in [Pittsburgh.]”

Homewood resident Woody Yates, 46, is part of the Ma’at team working to renovate part of the warehouse. He took the CEA course and says he is proud to be a part of the change that is happening in his community.