As new dormitories have been sprouting up across Downtown, residents of the Wood Street Commons can't help wonder if their building will soon be put on the market. So, once again rumors swirled that the neighboring Point Park University is eyeing the 258-unit building for its expanding student body.

But at a Sept. 19 residents' meeting, the residents got the assurances they have longed for: The Commons, which offers much-needed Downtown housing to those who subsist on Social Security or otherwise meager incomes, has not been -- and will not be -- sold.

"It was time for us to communicate to the people that we're working diligently to make the building work," says the Common's now-retired co-founder Phil Pappas, who appeared at the meeting.

"What we wanted to make sure is that the tenants understood that the building was not going to disappear -- ever," says Tom Mistick, who oversees the general partnership that owns the Commons.

Pappas and Mistick were among those scrambling to find funding to continue the Commons' operations. Its future was dealt a potentially financially fatal blow in 2005 when Allegheny County Department of Human Services decided to move its offices at the Commons to a newly purchased building. The $900,000 annual lease footed by the county has helped subsidized the Commons' housing program. The county has opted to terminate the lease by next June.

However, Mistick, also a major provider of privately owned affordable housing on the North Side, says that what the county has is more than merely an office lease. County officials, including the late County Commissioner Tom Foerster, were instrumental in the Commons' creation.

"It's a social compact between the county and the people to support them," says Mistick. "People [at the Commons] are extremely fragile. They need safe and affordable housing."

The Commons was founded in 1986, when increasing homelessness was a nationwide epidemic. Local foundations, county officials and social workers hatched a plan to house the city's destitute. The then-YMCA headquarters on Wood Street, which served partly as a boarding house, was up for sale. With funding from foundations and the federal government -- and with no small amount of help from the late Sen. John Heinz III -- a partnership between a real-estate management company and a social-service agency bought and refurbished the 16-story building into single-bedroom units.

The permanent housing facility, coupled with services, was touted nationally as an innovation at the time. Even today, the Commons remains one of the few places in the country that provides stable housing and supportive services under the same roof. (See City Paper Aug. 10, 2006, "A Tale of Two Center Cities.")

Kevin Evanto, spokesman for County Chief Executive Dan Onorato, says the county won't renege on its commitment to the commons and its people.

"The county executive thinks that it's a great program," says Evanto. "We're committed to ensuring that they can continue operating as they have been." To that end, Evanto says the county's departments of human services and economic development are devising a development plan for the commons. 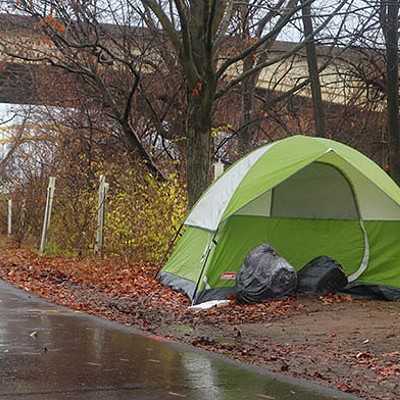