Won’t You Be My Neighbor? reminds us that Fred Rogers truly was our neighbor | Screen | Pittsburgh | Pittsburgh City Paper

The documentary is an honest, thorough look at the man countless children (and adults) knew as Mister Rogers. 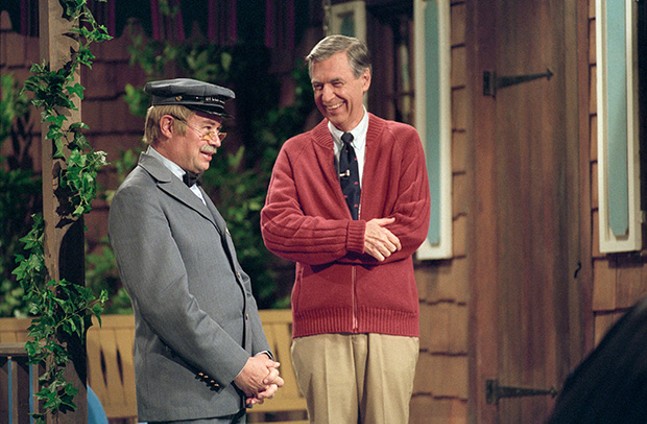 Image courtesy of Lynn Johnson
David Newell (left) and Fred Rogers from the show Mister Rogers Neighborhood in the film, Won't You Be My Neighbor?
There’s a GIF that I’ve seen circulate on the internet for years now. It shows beloved Pittsburgh icon Fred Rogers smiling and showing the camera his middle fingers. Mister Rogers giving the finger — how scandalous!

Old internet rumors have also circulated that Rogers was a war veteran who mowed down hordes of enemy troops and wore his trademark cardigan sweaters to cover up tattoo-covered arms. That’s all bullshit, of course, no truer than the “Nigerian prince” who shows up in your inbox promising riches if you just send him your bank information and mother’s maiden name.

That GIF is, of course, taken out of context. The actual scene (see below) features Rogers teaching children a song, and each finger of the hand represents a character in the song. Not so scandalous after all.


You see, the thing about Fred Rogers is that he actually was the man thousands of children saw on TV: soft-spoken, friendly, thoughtful and, above all, caring. That view of Rogers is explored in the new documentary Won’t You Be My Neighbor?, released Friday.

Won’t You Be My Neighbor? tells the story of Rogers’ life in a mostly chronological order, starting with his childhood and his first forays into TV. Though Rogers died in 2003, his story is told in a detailed manner via a combination of archival footage and interviews with everyone from Rogers’ wife, Joanne, to longtime producers and actors from Mister Rogers’ Neighborhood.

The funny thing about Won’t You Be My Neighbor? is that it’s not a film for children (if the PG-13 rating didn’t already indicate that). It’s a film for the adults who watched Rogers when they were children.

It’s easy to lose the lessons of compassion and love that Rogers taught in the day-to-day shuffle of life. Won’t You Be My Neighbor? is a reminder of those unfailing messages, and it’s a thoughtful, thorough look at the life of a well-loved man who greeted us all as his neighbors.