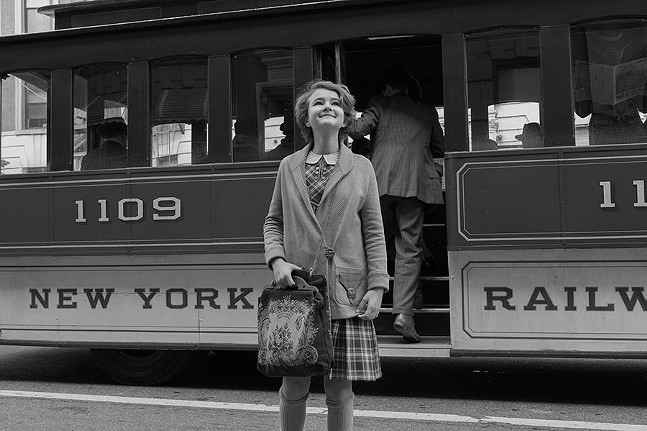 Rose (Millicent Simmonds) in the city

Among the pleasures of Todd Haynes’ films is his obvious love of recreating other time periods; most recently, he invited viewers into the 1950s with Carol. His new film, Wonderstruck, offers twice the pleasure, intercutting two narratives, one from 1927 and the other from 1977.

Wonderstruck is adapted from Brian Selznick’s young-adult novel, and is reminiscent of one of those mechanical puzzles, in which pieces are rotated and re-arranged before snapping together into a completed object. The film follows two 12-year-olds who have run away to New York City; both are on quests and wind up at the Natural History Museum. That’s just the start of the parallels between their tales, and as further information is doled out, viewers can speculate how the two stories will snap together to form one.

We meet Ben (Oakes Fegley) in his small Minnesota town of Gunflint; it’s 1977, and he’s sad because his single mother has recently died. A bizarre episode during which he’s rendered deaf provides the jolt he needs: Determined to find his father, he heads for New York City, armed with only a few clues (a book about museums, the name of an Upper West Side bookstore).

Meanwhile, in 1927, lonely Rose (Millicent Simmonds), who is also deaf, lives in Hoboken with her wealthy but strict dad. She cuts photos of her favorite actress from magazines, and uses the discarded pages to create fantastic cityscapes made from cardboard. Her journey to New York City includes a visit to the cinema and a journey uptown to the museum.

Rose’s story unfolds in black and white, with intertitles, like a silent movie, while Ben’s is set in the grubby, grimy years of the mid-1970s, where Manhattan is all garish polyester, street crime and the circle of hell that is the Port Authority bus terminal. Both children find refuge — one quite literally — at the museum, a place of genuine wonder filled with magical totems such as taxidermied exotic animals, dinosaur bones and a meteorite. (Wonderstruck is also a valentine to museums, and the unique inspirational role they play.)

The film aims for whimsy and wonder, while also setting up an emotional payoff. And the work does have its charms, including such stylistic flourishes as a stop-motion-animation sequence and a meticulously recreated film-within-a-film (a silent melodrama about an imperiled mother). But the unfolding can be clunky, the middle of the film suffers from some plodding pacing, and the wrap-up leans toward cloying, a solution to the puzzle that is perfunctory and strained. But that’s true of many tales — the mystery is simply more enjoyable than the answer. Like Rose and Ben find, with Wonderstruck, the journey is the more engaging aspect.