CP Photo: Jared Wickerham
Artist LaVerne Kemp poses with her fiber tree artwork at the Women of Visions show on opening night inside the Frick Fine Arts Building in Oakland.
Women of Visions, a Pittsburgh-based arts collective of Black women, celebrated its 40th anniversary on Wed., Oct. 20 with an opening reception at the University of Pittsburgh. Located in the Frick Fine Arts Building, the exhibition features 50 total works from all 22 of the current Women of Visions artists, some who joined the organization recently and others who have been a part of the collective for decades.

Included is a long glass case displaying flyers from previous Women of Visions shows, including ones from the 30th and 35th year anniversaries, as well as posters from shows in 1982. “It is definitely an awareness of their own history,” says Alex Taylor, a Pitt professor who helped organize the show with students from his Classical Curatorial Development class. The show is presented by Pitt’s Department of History of Art and Architecture, and was curated by Museum Studies students, according to the event website.

Student involvement in the show — on view in the Frick Fine Arts Building’s University Art Gallery through February 2022 — extends to those from an Exhibition Development class taught by Janet McCall, former executive director of Contemporary Craft. Students were paired with artists to discuss their work, their lives, and their vision for the show. The Classical Curatorial Development students also worked on assignments that will become a part of a publication on the history of Women of Visions.

“Drawing on the kind of human resource of Pitt students to tell that story, and for students to have an opportunity to learn how to tell historical stories and to draw on these kinds of resources, to contribute to telling that history, is pretty exciting,” says Taylor.

CP Photo: Jared Wickerham
Artwork by Jo-Anne Bates at Women of Visions
Women of Visions was founded in 1981 by a group of women artists looking for opportunities not afforded to them in the traditional art world. Over the course of the collective’s existence, members have hosted more than 50 shows in Pittsburgh and beyond. They became a nonprofit in 1995, and current president, artist Christine Bethea, has served in that position since December 2019.

Serving as the centerpiece of the entire exhibition is Ashley A. Jones’ “More than Just A Paper Bag.” Using charcoal and colored chalk, Jones drew current Women of Visions members on brown paper bags. The bags, a nod to the infamous paper bag tests in Black communities used to judge a person’s skin tone, were interspersed with a quote by Black writer and feminist, Audre Lorde.

Another standout in the show is the fiber work of LaVerne Kemp. Her fiber work trees highlight the fact that “even though we may seem separate, we all tangle at the roots,” says Sylvia Rhor, director of the University Art Gallery. Kemp also uses fiber, pictures, and other objects to craft her family tree, tracing from Virginia to Pennsylvania.

Mixed-media artist Lynne b. created a colorful piece signifying a ship bringing musicians and artists to Pittsburgh. The featured musicians had all set foot in Pittsburgh at some point in their careers. Next to the piece is a quilt made by Tina Williams Brewer that mainly consists of paper snippets of Pittsburgh Courier articles on Black Pittsburghers who have made a difference in the city. 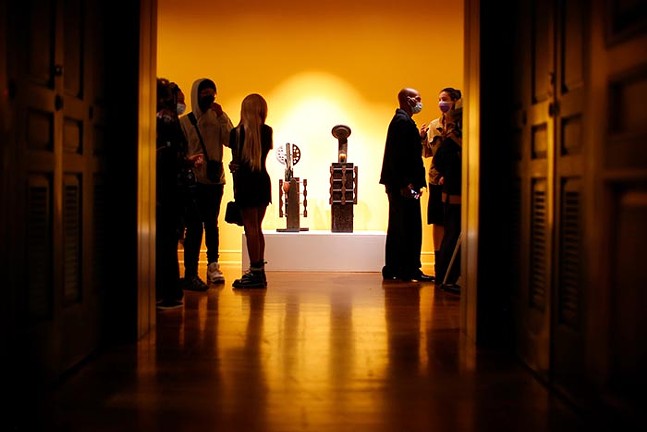 “We really liked this kind of idea that both of these works are quite literally assembling images of Black achievement in this city,” says Rhor.

Another striking piece is Mary Martin’s “Soul Clap Series: Severed Ties, II / Reciprocity.” Featuring two bronze ceramic hands linked together by a bronze rope, the sculpture is described as exploring “the power of hands and the ability they give us to create meaningful contributions.” The hands are etched with symbols that signify the “passing on of aspirations from mother to son.”

The show is a testament to Women of Visions as a unifying collective, and the incredible talent of Black women artists who have passed through the city at some point in their artistic lives.Women of Visions: Celebrating 40 Years. Continues through February 2022. Frick Fine Arts Building, University of Pittsburgh. 650 Schenley Drive, Oakland. uag.pitt.edu