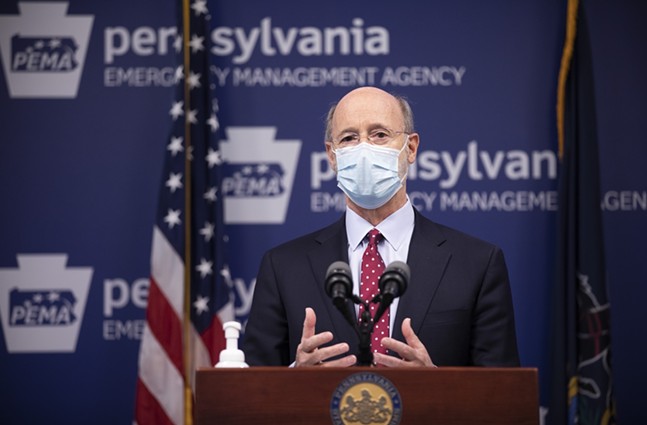 Photo: Commonwealth Media Services
Gov. Tom Wolf at a press conference today.
On Monday, Gov. Tom Wolf held a press conference with Department of Health Secretary Dr. Rachel Levine to address the rapid increase in COVID-19 cases across Pennsylvania over the last couple of weeks. They did not announce any new restrictions or mitigation efforts, and once again are hoping that strongly worded warnings from the government will be enough to curb the spread, despite little evidence of that working recently. Wolf also talked at length about the dangerous situation playing out across hospitals in the state, which are quickly running out of space and resources, and left the option open that restrictions could be coming in the future.

"If we don’t slow the spread of this dangerous virus now, the reality is that COVID-19 will overwhelm our hospitals and our health care workers,” said Wolf during the press conference. "That’s dangerous for everyone who needs medical care in a hospital for any reason, because it stretches resources and staff to the breaking point.”

He went on to share numbers about the drastic increase in cases over the past few weeks, including that the commonwealth jumped from a total of 200,000 cases six weeks ago, to over 400,000 total cases now. He mentioned how doctors and nurses are overwhelmed by the number of patients, and that both regular and ICU hospital beds are filling up.

Despite this, Wolf did not announce any new mitigation efforts, such as further limiting gatherings or indoor dining. Instead, he implored individual Pennsylvanians to take action into their own hands.

"We can stop the spread of COVID-19 if we work together. So please, stay home unless you need to go out, do not attend gatherings with people outside your household, and if you need to leave your home, wear a mask," said Wolf. "We can prevent that worst-case scenario from becoming reality, but that means that all of us need to take this virus seriously because the virus is in control and we need to take back control.”

During the press conference, Wolf was asked if he was considering more mitigation. He said that Pennsylvanians "all have a shared responsibility" to mitigate COVID-19. "Whatever the state does, or whatever the municipality does, pales in comparison to what each us can do by simply wearing a mask," said Wolf, "practicing social distancing, and making sure we are not gathering together with other people."

Wolf repeatedly mentioned mitigation efforts taken by the state two weeks ago, which included limiting alcohol sales around Thanksgiving and issuing an stay-at-home advisory, but not an order. He said he hoped those efforts would get Pennsylvanians stay home.

When asked by another reporter what gave Wolf the "confidence" that his words would have any impact today, when they didn't have an impact last time he offered a strong warning, Wolf stating that he is "still looking" at what his administration is going to do, and will announce plans soon.