Wolf at the Door: Polls have Tom Wolf running away with Democratic primary, but is he the right candidate to take down Corbett in November? | News | Pittsburgh | Pittsburgh City Paper

Wolf at the Door: Polls have Tom Wolf running away with Democratic primary, but is he the right candidate to take down Corbett in November?

"Tom Wolf has a great story to tell and he's got the money to go out and tell it." 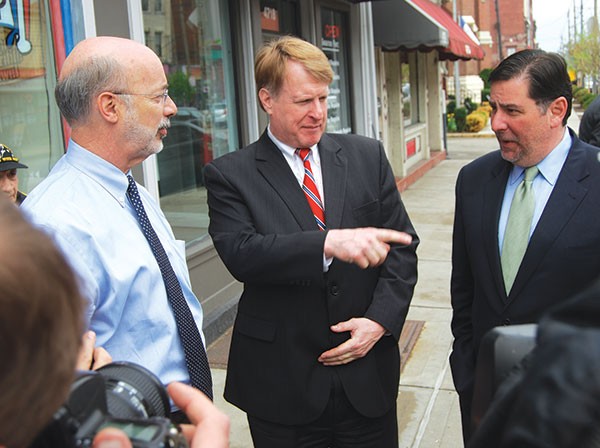 The Tom Wolf on the other end of the phone line May 2 was markedly different from the happy-go-lucky Democratic frontrunner who had been campaigning for governor in Bloomfield 10 days earlier.

There he'd been enjoying a pepperoni roll from the Groceria Italiana while talking to veterans, small-business owners and community stakeholders. "I admire what you've built here," he told them, noting that he wants to redevelop struggling communities into walkable mixed-use neighborhoods like Bloomfield. "And what's great is you're not just sustaining: You're still building."

In attendance were two of his earliest and most important backers: Pittsburgh Mayor Bill Peduto and Allegheny County Executive Rich Fitzgerald, who lauded Wolf for "sharing our values when it comes to hard work, rewarding work. And that's what attracted Bill and I and many others to support Tom."

But over the next 10 days, Wolf's campaign would be accused, with reason, of plagiarizing portions of its policy plan. He'd be criticized for ties to a former state rep caught up in the "Bonusgate" scandal, while having his business practices called into question by U.S. Rep. Allyson Schwartz, one of his opponents. Then another rival, state Treasurer Rob McCord, would accuse him of coddling a racist former mayor in his own hometown.

"I think I expected more of this type of thing in the general election than I did in the primary," Wolf told City Paper a day after McCord aired an ad focusing on the allegation. "I guess this model of politics is the standard fare right now."

Some big-name Democratic Party leaders, including former Gov. Ed Rendell, have come out swinging to defend Wolf. But for some Democrats, the allegations raise concerns about Wolf's unlikely rise, which was launched with TV ads bought with the help of $10 million in self-financing.

Chris Zurawsky, secretary of Squirrel Hill's 14th Ward Independent Democratic Club, says he had heard good things about Wolf early on, and that Wolf came across as "a breath of fresh air." Still, "I am bothered by the fact that he is financing his own campaign," Zurawsky says. "It's undemocratic and it has that feeling of allowing the person with the most money to simply step into public office."

And Zurawsky worries what else may be in store.

"If we think this is bad, what happens when he's up against [Republican incumbent] Tom Corbett and the Republican smear machine?" Zurawsky wonders. "I just don't know if he's up for that kind of fight. He seems tired of it already."

Can a political outsider — one who has never run statewide and who comes off more like a high school science teacher than a politician — stand up to the rigors of a general election? The answer may be irrelevant, some experts say, because Wolf's momentum may be impossible to overcome ... at least in May.

Even after days of negative ads and debate attacks, a May 1 a poll from the Allentown Morning Call still showed Wolf a whopping 25 points ahead of Schwartz, his closest competitor. And while one-third of Democratic voters remained undecided, the consensus behind Wolf has been building: 42 percent said they were leaning toward Wolf.

"Even after all of this, Tom Wolf is still 25 points ahead," says G. Terry Madonna, pollster and director of the Center for Politics and Public Affairs at Franklin & Marshall College. And there may be fewer undecided votes up for grabs than it appears, he says: "One thing we know traditionally about undecided voters is that a large percentage of them will not vote."

"In order to beat Wolf, you have to find something to pull him back into the pack, and that's tough to do when you have a group of candidates who agree on 90 percent of the issues," Madonna adds. "Then, you have to do something to pick up a good chunk of that support in order to overtake him. At this point, with three weeks left to do it, I don't know if it can be done."

Although it seems funny to say that a frontrunner with a 25 percent lead came out of nowhere, that's the case with Wolf. As of Jan. 26, when Wolf appeared as one candidate among eight at a Carnegie Mellon University debate, Wolf was as anonymous as Allentown Mayor Ed Pawlowski or minister/businessman Max Myers. While he answered all the questions fully and confidently, he did little to set himself apart from the crowd, especially compared to others on the stage.

Shortly afterward, though, Wolf began running television commercials highlighting his story. He was a Jeep-driving businessman who'd run and rescued a family-owned furniture company, and whose employees participated in a generous profit-sharing program.

Making the ads even more effective was the fact that no one challenged them. His opponents stayed off television for weeks.

"Tom Wolf has a great story to tell and he's got the money to go out and tell it," Rendell tells CP. "He got on TV early and by the time anyone else did, it was pretty well over.

"That was a gigantic political blunder by McCord and Schwartz. They let him go on TV for seven or eight weeks unanswered. The momentum you can build is amazing."

Duquesne law professor and political pundit Joseph Sabino Mistick says Wolf followed the playbook that Rendell himself used against Bob Casey during his 2002 gubernatorial run. "He bought broad and deep," Mistick says. "But what's refreshing here is [Wolf] actually had a story to tell, and it's a story that people find appealing. That's why so many politicians and voters were drawn to him so quickly."

Mistick says he was skeptical of Wolf at first, but people "told me I had to check him out. So I met with him and I said, ‘How the hell do you expect to get elected with zero experience and no political infrastructure?' He said, ‘I have a message and a story to tell.' Well, it's been working."

Republican political consultant Bill Green agrees that Wolf has delivered his message better than any of the other candidates — in either party. "His timing was perfect," Green says. "In January and February, we were all locked inside and frozen and he had the airwaves all to himself. No one responded. And it worked. I've had people recite that commercial back to me word-for-word."