“Once we got those headset mics, all bets were off!” 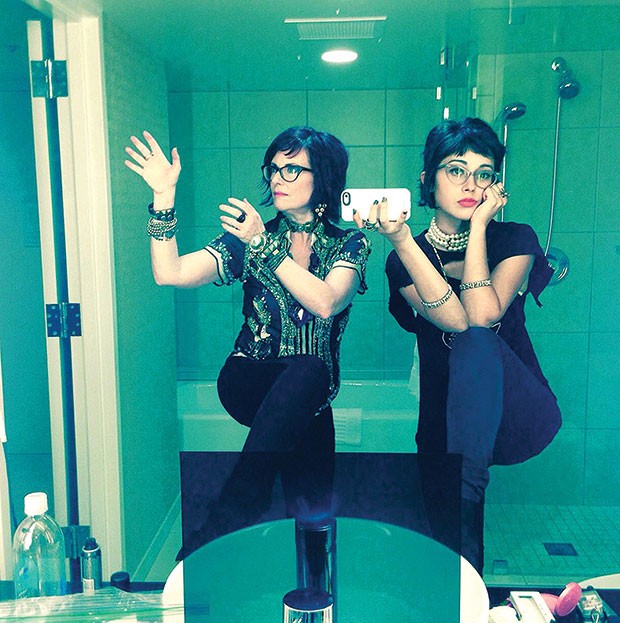 An Evening With Nancy And Beth

7 p.m. Sat., May 6. Mr. Smalls Theatre, 400 Lincoln Ave., Millvale. $30. 412-821-4447 or mrsmalls.com
George Jones’ classic 1980 hit “He Stopped Loving Her Today,” is quite possibly the most depressing song in the history of music — well, at least in country music. It’s not just the song, which recounts a dying man getting over his lost love by, well, dying. It’s the way Jones painfully wails each word in that way that only the Possum can do. I was positive that a more depressing version of this song could not be performed.

And then I heard Nancy And Beth. The band is the creation of actress/singer Megan Mullally — probably best known for her 1988 guest-starring role on an episode of Murder She Wrote called “Coal Miner’s Slaughter,” and a lesser-known TV show, Will & Grace — and Stephanie Hunt, an actress/musician featured on shows including Friday Night Lights and Californication. The duo’s haunting harmonies and deliberate pacing took the song to levels of depression that even a double dose of Ativan couldn’t bring you out of.

“Wow, that’s nice of you to say. That’s a great compliment,” Mullally says, in an interview with City Paper. “That song has the perfect combination — it’s beautiful, depressing, and in a way, kind of funny.” Mullally and Hunt pour their emotions into each lyric for nearly the entire tune, building toward an ending that’s not at all what you’d expect. “There’s that great spoken-word part at the end of the song. You get a sense that we’re doing a send-up and building toward something.”

That was sort of the general feeling when Mullally and Hunt got together in 2012, while they were both in Austin, Texas, working on the same film, Somebody Up There Likes Me, starring Mullally’s husband, Nick Offerman.

“She came up to me and told me that she played the ukulele and sang,” Mullally says laughing. “I just politely said, ‘Oh, I’d love to hear it some time.’ The next thing I know, she sits down and says, ‘I have this one song, but you have to sing this part with me.’ It was a little strange, but I did, and the moment our voices hit, I was like, ‘Um, wait a minute here.’”

There are several moments on the self-titled Nancy And Beth record where that synchronicity is on display. Besides the aforementioned George Jones tune, there are covers of Lou Rawls’ “Fine Brown Frame,” “Cab Driver,” by The Mills Brothers, and Rufus Wainwright’s “Vibrate.” In a way, the only apt comparison to their harmonies are to sibling duos like the Everly Brothers, The Andrews Sisters, and Sweethearts of the Rodeo. Many a music writer over the years has pointed out that, for various reasons, there’s a perfect harmony between sibling acts. While Mullally and Hunt may be sisters in the broader social sense, they’re not related, yet they nail that mark.

It may seem strange to fans of her acting work that Mullally is suddenly embarking on a music career. But this band is more of a return to musical roots, not a new venture.

“I started as a ballet dancer, moved into musical theater, and I was in a few bands,” she says. “In fact, I never even thought about acting. Most people don’t know that. They only know me from Will & Grace.”

The record features nude photos of Mullally and Hunt with the band name strategically covering them, while still allowing tasteful amounts of under and side boob. (“Hey, I figure if we’re nice enough to take our clothes off, the least you can do is talk about the record,” she quips.) The songs on the record don’t have any discernible connections to one another. But what they do have in common is that each tune “makes us completely freak out when we hear them. Once that happens, we’re just driven by a force bigger than ourselves.”

Take, for example, their cover of “I Don’t Love Her,” an instant classic of misogynistic hip hop performed by rapper Gucci Mane. It’s not exactly a song you’d expect to hear from progressive feminists, but here it works so well that it kind of morphs into a satirical feminist anthem. In between crisply thrown verses are sharp, witty callbacks that are worth the surprise of hearing them for yourselves, including two great drops from Mullally about Gloria Steinem.

“Someone told me that we should perform this song, and I never turn down a good song tip,” Mullally says. “I printed out the lyrics and played it for Stephanie; we were crying from laughing so hard. It’s so opposite of a feminine anthem that when it’s done by these two girls, it makes you stop, think and really listen to it. The song kills every time we do it.”

When you go to a Nancy And Beth show (the name chosen from a list of prospective monikers), singing is only the start of the performance. There are costumes, and each song is choreographed by Mullally, who wants their gigs to be “this new magical form of ‘Showbiz!’ with the exclamation point.” The choreography and the costumes were added organically. She says Hunt didn’t have a background in dance, but says the 27-year-old performer picked it up quickly because she’s “smart and quick.” Mullally says the pair also has amazing chemistry because of Hunt’s upbringing in a very musical family.

“She has an unbelievable library of music in her head from a lot of different time periods,” Mullally says. “We started doing a little heel-toe, heel-toe at the stationary mic, but once we got those headset mics, all bets were off!

“My new goal is to do an underwater number in a huge glass tank in Las Vegas. Look out, Esther Williams.”