With temporal-spatial sleight-of-hand, he manages to be both a realist and a surrealist. | Features | Pittsburgh | Pittsburgh City Paper

With temporal-spatial sleight-of-hand, he manages to be both a realist and a surrealist.

Cooper's drawings distort and dramatize as they convey essences, not unlike theater. 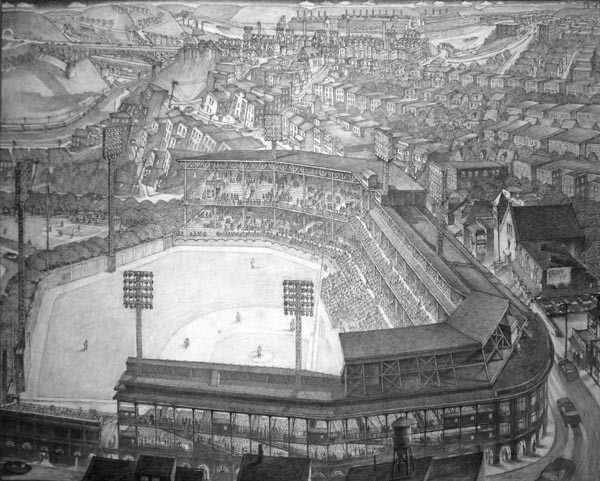 Douglas Cooper makes big drawings for a good reason: namely, that there's a lot he wants to cram in. Cooper's celebration of Pittsburgh's natural and built environment, with past and present co-mingled in a kind of creative non-fiction, seems inexhaustible. His ongoing series in this vein has evolved over the decades but — forays into built-up reliefs and the animation "Pinburgh" notwithstanding —  hasn't changed much in the past 10 years. A survey titled Douglas Cooper: The Eye's Journey is on exhibit now at Concept Art Gallery.

At up to 4 by 8 feet — his murals run much larger — Cooper's charcoal drawings on paper are as expansive as the view from Mount Washington and as dizzying as a drive down Rialto Street. The handling of perspective ranges from relatively normal to near-fisheye distortion, often in a single picture. The inclusion of his pencil studies here shows how he carpenters together the various views and perspectives.

In "McKee Street" (2012), the city's Oakland neighborhood is rendered in a view approximating what you might see from a low-flying helicopter, with the swirling eddies of road, railroad, river and hillside wrapping around homes and churches, mills and factories, cars, barges and bridges. Details pop out, such as abandoned appliances in a yard, or a porch with a magnificent yet commonplace view. The curves capture the local terrain with a cartographic quality, but they go beyond that, creating the sense that everything is dynamic and interconnected.

Yet where exactly are these scenes, in time as well as space? There's a "suspension of disbelief," as they say about movies, and in Cooper's drawings there's plenty of freedom taken with space. Neighborhoods and their boundaries are pushed around like a gerrymandered city-council district. Meanwhile, there's also a layering of time. In his generic renderings of people and automobiles, Cooper withholds details of design and fashion that we rely on to precisely locate images in time. Additionally, things that are long gone, such as Forbes Field or steel mills, coexist with modern buildings and signage, though the dominant presence seems to be somewhere back around 50 years ago. There is some nostalgia tinged with a sense of loss and regret, but it's really more of a pastiche of memory that commemorates the past without disdaining the present.

Unexpectedly, these drawings don't depict a single time of day, or night. The closer distances are set in darkness with windows aglow and headlights slicing across roads, with the drawings seguing into full daylight in the farther distances. By using a full range of contrast throughout the picture, Cooper's developed a way to make the transition seamless, and it can be hard to pinpoint exactly what's creating the slightly disorienting effect even as we know there's something strange going on. This is not a spoiler; the technique is fully satisfying once you've grasped it.

Considering that he's an architecture professor who's been teaching drawing at Carnegie Mellon University for more than 35 years, it's not surprising that his work emphasizes buildings, infrastructure and landmarks. His drawings include aspects of cartoons and cartography too, and they look like they could even be studies for paintings, though for Cooper the drawing's the goal. His style does have limitations, perhaps self-imposed. But that's a non-issue as he plays to his strengths, relying on the image as a vehicle for visual information to carry the day. He appears to find pleasure in representation, and the pictures feel more expository than expressive. There's no Matisse-ean elegance of sinuous lines or unexpected marks. All is rendered with the texture of charcoal scratching back and forth, consistent from corner to corner and from year to year. The shading renders three-dimensional form in light and space but says little of the varied nature of matter, which is an omission that's essential to the diagrammatic, illustrational quality that is Cooper's signature and strength.

Cooper's drawings distort and dramatize as they convey essences, not unlike theater. With temporal-spatial sleight-of-hand, he manages to be both a realist and a surrealist. If you're familiar with the locale, there's a great deal of pleasure to be had in puzzling over the relationship between Cooper's drawings, with their willful inaccuracies, and what we know to be there. Here. While Cooper's strategies have been adapted to mural projects depicting Rome, Seattle and elsewhere, Pittsburgh's roller-coaster terrain seems ideally suited to his approach. On my way home from the gallery, I noted the views of piled up hills and distant houses, and my surroundings seemed different.