“I’m trying to find the next Foo Fighters, the band that’s going to sell out arenas.” 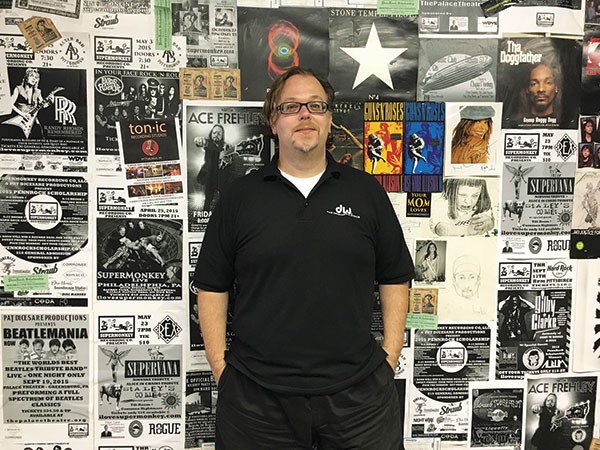 “I’m a child of the ’90s, I was influenced by the grunge scene,” he says, sitting behind the desk in SuperMonkey headquarters, an Allentown storefront which — thanks to a grant from the neighborhood nonprofit Hilltop Alliance — will eventually open to the public as a record store.

He’d also like to capture the camaraderie of that moment in music history, and build the kind of support system for Pittsburgh bands that he still sees on trips to visit family in Seattle. “Everyone is building each other up,” he says.

Groblewski may sound like an idealist, but he’s no music-biz newbie. In addition to his record label, he does concert promotion (also as SuperMonkey) and is a partner in McKeesport-based recording studio Tonic. He’s also a veteran musician — his best-known band, the original SuperMonkey, recently played its last show, and he has a couple new bands in the works.

Groblewski started his label in 2012, so he could more easily release his music. In 2014, with the help of semi-legendary local promoter Pat DiCesare, he launched the PennRock Scholarship, a showcase of Pittsburgh bands and alternative to the contest-style Battle of the Bands. The winner, judged on a range of criteria, gets a SuperMonkey record deal, studio time, photo and video shots and more.

“Things,” Groblewski says, “that would actually help take [bands’ careers] to the next level.”
The CD by last year’s winners, the Dirty Charms, is already prominently displayed in the Allentown space: When the shop is operational, Groblewski plans to devote the whole front room to SuperMonkey artists, with a wider selection of vinyl, and some guitars, in the back.

Groblewski doesn’t mince words about his aspirations for SuperMonkey. “I’m trying to find the next Foo Fighters, the band that’s going to sell out arenas,” he says. And considering the radio-ready sounds of signees like roots-rock singer/songwriter Brett Staggs or Groblewski’s own AQUAROCKET, such goals don’t seem entirely lofty. After all, Sub Pop started out as a small label that got lucky with a little band called Nirvana. And, as Groblewski puts it, “I’ve always felt that the harder I work, the luckier I get.”