With rental reforms stalled in the Legislature, Gov. Wolf announces a workaround 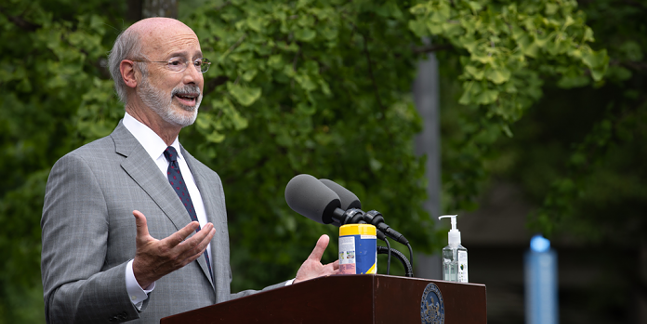 Photo: courtesy Office of Governor
Gov. Tom Wolf speaks at Lancaster Health Center in July
Gov. Tom Wolf on Tuesday said he would use regulatory powers to remedy one of the most problematic elements of Pennsylvania’s troubled housing assistance program, a move he says will allow more tenants and homeowners to stay in their homes during the COVID-19 pandemic.

But the changes his office announced in a statement appear to fall short of the reforms that he’s asked the General Assembly to enact, which have been stalled in the House since early October.

The new guidelines Wolf issued for landlords and mortgage lenders on Tuesday will allow them to enter repayment plans with tenants and homeowners who pay more than $750 a month for housing and have lost income due to COVID-19.

The change provides a workaround to a provision in state law that caps housing assistance payments at $750 a month.

Housing advocates say that limitation has rendered the program basically useless, since housing costs in most parts of the state exceed $750 a month and the program required landlords to forgive the balance.

Wolf previously said that the Legislature had sole authority to fix Pennsylvania’s housing assistance program, which was intended to keep cash flowing to landlords and mortgage lenders during a period of record-high unemployment.

But the guidelines the Democratic governor issued Tuesday mark the second action he’s taken this month to address its problems while the Republican-controlled General Assembly is out of session.

Wolf reiterated Tuesday that state lawmakers still have a role to play in reforming the troubled program. He reiterated his calls for them to pass legislation streamlining the application process and raising the monthly assistance allowance.

His office did not immediately respond to questions about whether he had the power to implement those changes unilaterally.

“These are positive steps, but we still need a larger solution,” Wolf said in the statement his office released Tuesday. “I continue to urge the Legislature to fix the program’s other flaws so more struggling families have a place to live.”

Funded with $150 million from the federal CARES Act, Pennsylvania’s housing assistance program has been beset with problems since it launched in July.

By September, it had doled out barely $3 million to help tenants, even though nearly 400,000 Pennsylvanians said they’d fallen behind on rent over the summer.

Housing advocates have said that stringent rules and a cumbersome application process tamped down participation in the program. They called on the General Assembly to implement fixes and extend the application deadline so more tenants could secure aid.

A bill containing many of those recommended fixes got bipartisan support from a state House committee in late September. It was left in limbo after a lawmaker’s COVID-19 diagnosis led the House to abruptly cut short its session earlier this month.
Elizabeth Hardison is a reporter with the Pennsylvania Capital-Star where this story first appeared.