With photos and oral history, a new book portrays Roberto Clemente mostly through the eyes of his family. 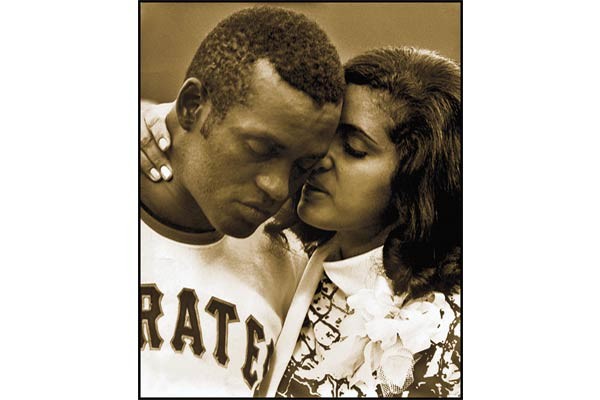 Roberto Clemente with his wife, Vera

Pittsburgh Pirates legend Roberto Clemente has been gone for more than 40 years, but his name remains the one most closely tied to the franchise. Many fans even claimed there was no way that Clemente's number, 21, would be tied to 21 consecutive losing seasons.

As important as Clemente's legacy is to Pittsburgh, it's infinitely more important to his family. That love, admiration and duty to their husband, brother and father is the overarching theme of the new oral history titled Clemente: The True Legacy of an Undying Hero (Celebra).

The book's credited author is The Clemente Family, but it's a collection of anecdotes and quotes as told to long-time sports columnist Mike Freeman, of the online sports site Bleacher Report. The 262-page book's layout is as stunning as its content, with more than 100 photographs accompanying the text. Freeman's familiarity with his subject is obvious.

"Clemente was one of the first professional athletes to fully understand that power and wealth didn't have to just transform a single individual," writes Freeman. "They could act as engines to alter the lives of many."

The photos, from all phases of Clemente's career, are presented without captions and tend to follow each chapter's theme rather than any chronological order. Overall, it's a pretty powerful experience. At the end of the second chapter, called simply "Sacrifice," for example, is a picture of one of Clemente's young sons wearing a suit, kissing a large poster of his father's face. It's presumably from the time around the 38-year-old right-fielder's funeral.

The book is brilliantly put together to take the reader on a journey through Clemente's life through the eyes of those who knew him best. They talk about Clemente the ballplayer, the humanitarian, father and husband — both the good and the trying aspects of being close to a truly remarkable, beloved man.

"As the years went by, and everyone reminded me of how I looked like my father and acted like my father, each comment reminded me that my father was, in fact, gone," says Clemente's oldest son, Roberto Jr., who was 7 when his father died. "I thought of something drastic. I was 13. I went to my mom and said ‘I want to change my name.' She said, ‘It will be okay. It'll get better.' There was so much pressure being Roberto Clemente, at that moment, I didn't want to be Roberto Clemente."

The book also stands as a testament to Clemente's wife and steward of his legend, Vera, and her ability to hold the family together after Roberto was killed in a plane crash in 1972 on his way to an earthquake-relief mission in Nicaragua.

"My dad was great, but my mom was incredible," says youngest son Ricky Clemente. "Look at what she did. She raised us alone after our dad died. She never felt sorry for herself. She never abused the Clemente name. She's just a great person."