With no record label, a liberated Jukebox The Ghost leans in to a poppier sound | Music | Pittsburgh | Pittsburgh City Paper

With no record label, a liberated Jukebox The Ghost leans in to a poppier sound 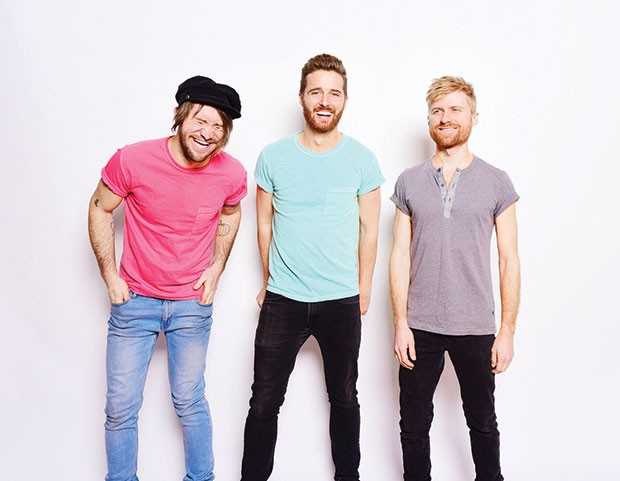 Jukebox the Ghost with The Elwins

7 p.m. Thu., April 13. Mr. Smalls, 400 Lincoln Ave., Millvale. $17-20. 412-821-4447 or mrsmalls.com
Jukebox the Ghost has been around for 13 years now; ever since members of the Brooklyn-based trio of Ben Thornewill, Tommy Siegel and Jesse Kristin met as students at George Washington University, in Washington, D.C. In the years since forming, the band has spent time on a major label, toured the country many times and released four full-length albums. For the most part, it’s followed a traditional formula: Release an album, do a couple of tours, start writing the next one.

But that’s changing. The group’s label, Cherrytree Records, worked successfully for years as an offshoot of Interscope, but that contract ended in 2016. The trio is no longer on a label, its touring schedule isn’t dependent on album promotion, and the members are not even sure if they want to release their next effort in a traditional full-length format.

At the moment, the band has been traveling from coast to coast trying out different producers for its new songs. So far, JTG has recorded 11 songs and has four more to go. Some of the songs were recorded at home, others were recorded with various producers in New York and Los Angeles.

“It feels like the first time we’re actually responding to how the industry’s changing,” explains guitarist and vocalist Siegel. “We used to be so rigid; release an album, go on two tours, repeat.”

Now the band will have 15 songs and total creative control about what to do with them. Siegel says they may become EPs, an EP and a full-length, two full-lengths or something else entirely. There are no rules anymore.

Siegel chatted with City Paper by phone from the van on the way to Bethlehem, Pa., for the first show of a short tour. The band spent the morning unpacking and repacking its van in the rain. Though the future has an element of uncertainty and the morning had been tiring, Siegel sounded genuinely excited about the band’s future.

From the release of its debut full-length, in 2008, the band has always possessed a larger-than-life sound, like its music could easily score a Broadway production or soundtrack a movie.

A lot of Jukebox’s musical-theater vibe is a result of vocalist and pianist Thornewill’s background in classical and jazz piano. He approaches rock from a classical angle, while Siegel and drummer Kristin were raised on rock ’n’ roll.

“We, as a band, are a bunch of dorks at heart,” says Siegel. “We think we’re making rock music, but that campy, slightly musical-theater vibe always sneaks through.”

But since Live and Let Ghosts, in 2008, the band’s sound has shifted several times. Through Safe Travels in 2012 and its last self-titled studio record in 2015, the band has teetered between grandiose piano rock and a catchy power-pop sound, but all of it is anchored by that slightly quirky energy, the strong classical piano sounds, and grand rock riffs held down by smart, simple drumming.

The band’s latest single, “Stay the Night,” is a distinctly Jukebox the Ghost track. While “Stay the Night” reflects a shift to poppier songwriting (its chorus is anchored by eighth-note claps), it retains that piano-rock energy that feeds the band’s cult following.

“Something about this song reflects that classic JTG sound, but it’s a meeting of worlds between the poppier side and the quirky sound from our early material,” explains Siegel.

Sometimes when bands create poppier music, the shift leaves new songs sounding cold and distant, like they exist only inside fancy L.A. recording studios. But rather than sounding too squeaky-clean or over-produced and impersonal, “Stay the Night” feels homegrown and warm, a result of the band’s writing and recording from home studios.

Another recent change comes from each member learning how to record and self-produce. They’ve created a collective 70 demos to bring to the table in the time since Jukebox the Ghost was released in 2015.

Each has a home studio, and some of the tracks they’ve recorded at home will be released. The band is learning on the job, but it has improved the members’ writing process.

“We’ve taken some of our time off to become much more adept producers and engineers,” says Siegel.
Being able to record your own tracks is empowering for a band reinventing its routine.

“When you can record your own material, you don’t feel powerless. It’s a buffer to not make huge mistakes in the studio that cost immense time and money,” says Siegel.

“It’s a nice little idiot-check,” he adds with a chuckle.

Something else that “Stay the Night” hints at is JTG’s growing Queen worship. The band performs a show every Halloween called HalloQueen, at which the members perform a set as themselves, retreat backstage to change into costume, and return as the members of Queen to play a cover set in character.

“Just by learning that music and performing it, it sort of seeped into our DNA,” says Siegel.
As a result, a lot of what pianist and vocalist Thornewill brought to the table for this album has a Freddie Mercury feel. You can hear it in the quiet part of “Stay the Night.” The vocal run and the melody feel big and dramatic, like the epic build in the quiet bridge of “Under Pressure.”

At this point, regardless of how it was recorded or what influenced it, the band is just excited to release new music into the world and share it live with audiences. When CP asks how he feels about finally releasing new music, Siegel responds in a satisfied tone, “It’s about time.”