With frozen pizza for catering and neighbors as their guests, a Pittsburgh couple weds on the porch during COVID-19 | News | Pittsburgh | Pittsburgh City Paper

With frozen pizza for catering and neighbors as their guests, a Pittsburgh couple weds on the porch during COVID-19

On Monday night, Allison Ruppert and Rob Conroy did what they call a "semi-spontaneous" wedding ceremony on the porch of their North Side home in view of their neighbors. The bride wore a ballgown she bought a year ago and had “never touched” and held a pot of mint as a bouquet. The two exchanged rings bought from Amazon (with a 20% coupon, Ruppert makes sure to point out).

The couple, who have been in a relationship for 11 years and bought a home together five years ago, decided to move on with the marriage when the COVID-19 situation began to escalate.

“As things with the virus got scarier and more uncertain with every waking day, we thought that we would fast track getting a license,” says Ruppert, who does marketing for the North Side nonprofit and event space, City of Asylum. “We knew that we would be married eventually, but something like a plague makes you prioritize things and revisit what you’ve been putting off.”

Ruppert says she met Conroy, who works as the organizing and interim policy director for the statewide gun violence prevention group, CeaseFirePA, through a volunteer stint that she did for WYEP. From there, Conroy says they “just kept running into one another virtually and in person,” as they shared many common interests.

“Eventually, we started going to a lot of cultural events together … as friends, but within a couple of months we realized that we were quite smitten with one another (at least I can say that – maybe she'd tell it differently),” Conroy wrote in an email.
click to enlarge 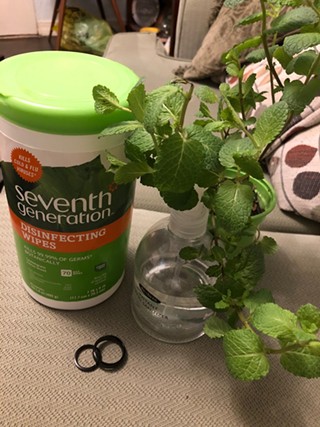 
They initially planned on having a traditional wedding but realized the officiant and venue they wanted wouldn’t be available until May. So they instead opted for a self-uniting marriage, a type of ceremony legal in Pennsylvania. Sometimes called a “Quaker marriage” after the religious group that started it, the practice allows a couple to be married without the presence of a third-party officiant. Conroy and Ruppert asked their neighbors to serve as witnesses and then sign a document from six feet away to comply with social distancing.

“I didn’t even move the bags of soil that covered our porch so that it was clean,” Ruppert says.

Afterward, the couple celebrated with a frozen pizza.

Ruppert says they do plan on having a more formal celebration but have not set a date. As “two people who work for non-profit organizations in the social justice and arts fields,” Ruppert says their own day-by-day realities are as uncertain as those of wedding professionals, local venues, and performers.

“It breaks my heart to see the struggle that people are feeling already,” says Ruppert, adding that, for now, they plan on saving money for a possible future party with family and friends. “Conventional or traditional wedding planning seems so irrelevant and almost foreign now. I can’t imagine picking out stand mixers and sheets now (although I really would like a stand mixer) or taste-testing cakes, but the thought of celebrating with people that we care about still makes sense, no matter how long we have to wait.”