With Doomsday Student, members of Arab on Radar and The Chinese Stars return to their chaotic roots | Music | Pittsburgh | Pittsburgh City Paper

With Doomsday Student, members of Arab on Radar and The Chinese Stars return to their chaotic roots

"What it did do was prove that whatever we were doing onstage was getting at people in a really visceral way. You don't really leave a Coldplay show with that."

Doomsday Student has a way of getting to audiences. And while that particular band has only existed for a few years, its members have a tradition of musical agitation that goes back much further.

In the mid-'90s, singer Eric Paul — along with guitarist Steve Mattos, drummer Craig Kureck and others — formed the Providence, R.I.-based noise band Arab on Radar. While a sophomoric sense of humor always shone through (song titles from its 2001 record Yahweh or the Highway included "God Is Dad" and "Semen on the Mount"), the music itself was chaotic, dissonant and nihilistic. Live performances where unhinged, and occasionally featured nudity. Sometimes, things got a little out of hand.

"Inevitably, there'd be a couple altercations on tour, mostly while playing," Paul recalls. "We've been attacked on stage and after shows. For whatever reason, what we were doing elicited a lot of raw feeling in a lot of people, and we got into a lot of fistfights." 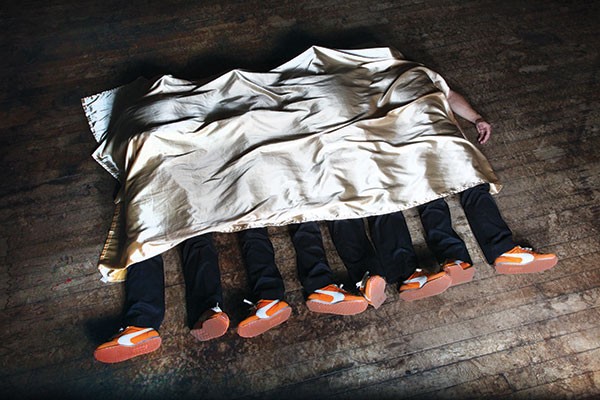 The goal was not necessarily to antagonize audiences, at least not to that degree. "It's not that I think it's a positive thing," Paul says of these moments of aggression. "It's really scary, and I never really felt that great after. But I think that what it did do was prove that whatever we were doing onstage was getting at people in a really visceral way. You don't really leave a Coldplay show with that."

In 2002, Arab on Radar disbanded, and Paul formed The Chinese Stars with Kureck. While many audiences found The Chinese Stars confusing (particularly when it opened for more traditional rock acts), it was a considerably more accessible band, playing something much more recognizable as rock 'n' roll.

For Paul, however, the transition from Arab on Radar to Chinese Stars spurred a minor identity crisis. Mostly, he found that he missed drawing from his old influences, like The Birthday Party, Captain Beefheart and Chrome, among others.

"More or less, I was 19 when I started playing with Steve, and the beginnings of Arab on Radar started coming together," he says. "That was my upbringing, all of those records that inspired that band. It was actually more uncomfortable for me to try to do stuff that was more accessible. I felt very lost doing it."

Then, in 2010, Arab on Radar got back together for some reunion shows. "I got to play with Steve again, and playing with him brought back a lot of great feelings of our early days playing music that we felt most connected to," Paul says. Those reunion shows led to more collaboration between Mattos, Kureck and Chinese Stars guitarist Paul Vieira. "It kind of clicked, and we migrated back to the influences of our earlier days. It was kind of getting back to a place that we felt most comfortable with."

Arab on Radar could hardly be described as soothing, but Doomsday Student pushes things to the next level. Paul's vocals are crazier and the riffs are more jagged; the lyrics, while still steeped in humor, are darker, harsher and filled with dread. Paul doesn't shy away from shock value: "They told us we were a mistake / so let's fuck away all our accidents / let's fuck away all our bad parenting," he yowls on "Disappearing," the opening track of 2014's A Walk Through Hysteria Park. But he's ultimately dealing with the mundane horrors and anxieties of everyday life. A poet as well as a musician — Paul has published several collections of poetry, and last year went on his first full book tour — he isn't just trying to make listeners uncomfortable.

"My lyrics are really thought out — they've always been very personal, and they've always been directly related to issues in my life," he says. The song "Hunting for a Headshrinker," for example, deals with having to find a new therapist after the one he'd been seeing for many years became seriously ill. "I didn't think that making a lyric about her being sick would be all that entertaining, so I skewed it as this really ridiculous story where she fell off a cruise ship." Not everyone gets it, but he says, "I've actually talked to a lot of people that have been like, ‘Hey, I know what you're talking about.' It's like a code: If you've been there, then you know."

Doomsday Student puts on an intense live performance — Paul spastically hurls himself around the stage, doubling over as though he might puke at any moment. And as with Arab on Radar, that physicality, mixed with the anxiety of the music, tends to bring out the feral side in some of their fans. Paul is quick to note that the band does not endorse violence ("We like gentle chaos," he says), but there is an undeniable thrill in igniting that kind of intense audience reaction. Paul recalls one recent festival in Boston, where an audience member got up on stage and started a fight, before getting hauled out by security. "And my first reaction was like, ‘Alright, this is still real.' It was just that raw emotion that I think is lacking in so much fucking music now."