With Colony Cafe and its cats moving out, Cafe liminal turns the Strip location into a haven for health food | Food | Pittsburgh | Pittsburgh City Paper 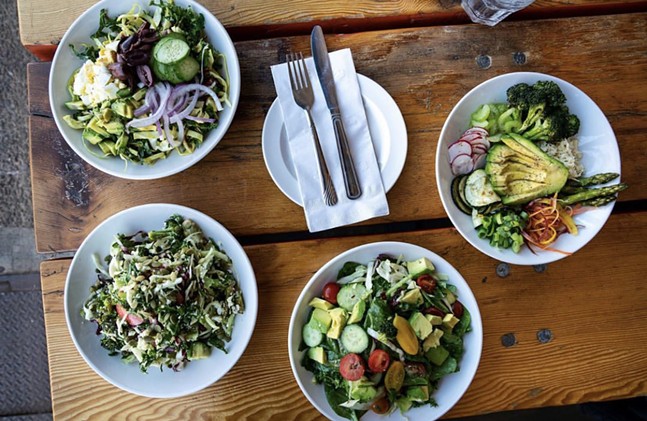 At the end of May, Colony Cafe, Pittsburgh’s first cat cafe, will close. By June 10, the health-inspired eatery Cafe liminal will take over the space.

This will be the second space for liminal, who launched initially in Smallman Galley (where they plan to remain once the restaurant incubator has reopened) as Steel City Subs. In mid-May, liminal will open for curbside takeout at the old Gluten Free Goat storefront in Garfield. Anthony Curtis, owner of liminal, plans to use the Garfield space as a ghost kitchen, while providing full-service at the Strip District location.

Starting out in Smallman Galley was a way for Curtis to gauge how Pittsburghers would respond to his menu, which ⁠is based on the acknowledgment that “every decision we make affects the health of our community and the environment we live in.” Curtis integrated plates that now make up the cafe’s menu onto that of Steel City Subs. “Smallman gave a fun kind of fishbowl to play around with some ideas,” he explains, noting how he pit menu items against each other to see which concept would win.

Steel City Subs officially became liminal in December. Curtis says that the menu didn’t change much, they simply dropped a few of the subs for healthier options.

The current menu includes a mix of vegan and non-vegan bowls, sandwiches, shareables, and more. Almost everything on the menu is gluten-free; for carnivores, protein (organic chicken or grass-fed steak) can be added to any plate.

Though it’s uncertain when they’ll be able to renovate and fully open the Strip District location, the end goal is to use the second floor of Colony Cafe — formerly for cat adoptions — as a mindfulness space. Eventually, it will hold classes on meditation, mindful movement, and more. Curtis describes it as a place where those working or living Downtown or in the Strip can unwind.

Cafe seating will remain downstairs. When finished, liminal will serve coffee from Guatemala along with a variety of soft drinks. At night, Curtis wants the restaurant to feel like a cocktail lounge (minus the alcohol).

Curtis chose the name for the cafe because "liminal" refers to a transitional space or time, and to him, it signifies the transition the world is making toward eating healthier, a new chapter that is being discovered on how food affects our bodies.

“We’re all going through that transition space, learning, and trying to adopt what we learned,” he says.

Curtis also notes that the opening is timely due to the current crisis. “My ultimate goal is to continue to bring awareness to communities that we’re able to bring this food to them if they’re starting to feel their habits slip during this time.”

Though the mindfulness space will not be open by June 10, Cafe liminal will be open for takeout and delivery by mid-June. Currently, the restaurant is offering free delivery on every order. Visit their website to view a menu and place an order.