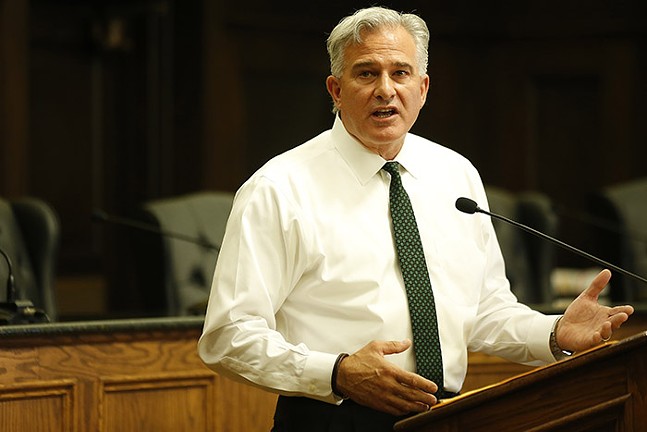 During a speech at the Shale Insight conference, Trump called area Democrats "anti-energy zealots" and even derided U.S. Rep. Conor Lamb (D-Mt. Lebanon) for not voting with Republicans (both things are easily proven false).

Despite this anti-Democrat rhetoric, the campaign manager of a well-known Democrat was present at the event. Allegheny County District Attorney Stephen Zappala (D-Fox Chapel) is running for re-election this year and the election just a week away.

DA Zappala secured the Democratic Party endorsement in February and the nomination in May, and he also cross-filed as the GOP nominee too for the upcoming general election.

The Allegheny County Democratic Committee has also been canvassing for Zappala, as is typical for some Democratic nominees. But Zappala's campaign messaging and actions during the campaign, including meeting with Young Republican groups, have led some committee members to openly support his opponent.

Democratic committee members in Pittsburgh, Ross, and the South Hills told CP two weeks ago that they are skipping supporting Zappala because they feel his opponent Lisa Middleman, a progressive-minded independent. more aligns with their values.

When CP tweeted about Steve Zappala at the Shale Insight conference, he defended his attendance.


A Facebook post from Coury also shows photographs of Steve Zappala in very close to the stage before Trump gave his speech.

The Allegheny County Democratic Committee and the Zappala campaign didn’t respond to requests for comment for this story.

Steve Zappala's attendance at a conference that also acted as a pseudo campaign rally for Trump doesn't necessarily mean he supports the president or his rhetoric, but it comes at a time of turmoil within the Allegheny County Democratic Committee.

On Oct. 12, Allegheny County Democratic committee chair Eileen Kelly sent out an email to committee chairs reminding them that members can’t support non-Democrats, since that breaks the state party bylaws. The email warned that supporting non-Democrats could result in removal from the committee. 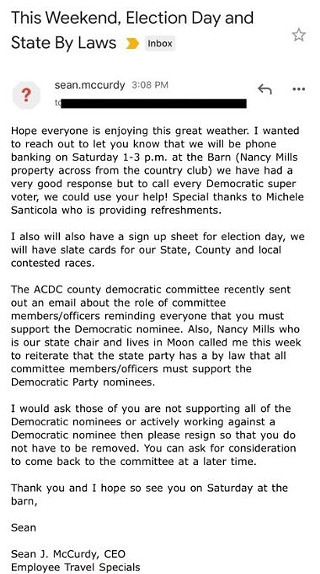 He then asked members that were not supporting or actively working against nominated Democrats to "please resign so that you do not have to be removed." State Democratic Party bylaws require an investigation before members are removed.

Jim Burn, solicitor for the county Democratic committee, told CP after Kelly's email was sent out that failing to enforce the bylaws against committee members could undermine the structure of the party. He worried it could lead to "’Democrats for Trump’ support within committees.”


Also, the Allegheny County Dem Committee has been canvassing for Zappala, as is customary for the Democratic Nominee, who was also endorsed by the committee in Feb.

Zappala (the campaign manager) can be seen in the second image, wearing Pirates hoodie and black cap

“It’s hard for committee members to comprehend how we are not allowed to support a woman running as an Independent who has been a registered Democrat her entire life,” says Hallam. “Instead, we are forced to support the incumbent whose campaign staff is seen hanging out at a Trump rally and other Republican events, but are nowhere to be seen at numerous Democratic events and candidates’ forums.”

DA Zappala met with the Young Republicans in August, just a few days after missing a Democratic candidate event in McCandless. He eventually returned to meet the Democratic voters, but he has also refused to attend a candidate forum hosted by the League of Women Voters.