With a new artistic director, Dance Alloy forges ahead with a new season.

Change rocked Dance Alloy Theater this past summer, as longtime executive and artistic director Beth Corning was fired by the company's board of directors. According to Alloy managing director Susan Sparks, board members sought a new direction for the company.

Both the Alloy and Corning remain mum over specifics of the ouster, because of pending litigation. But artistically, one thing is clear: During her six-year tenure, Corning (who remains in Pittsburgh) left behind a body of work acquired and created for Dance Alloy that was the richest in the company's 30-year history.

Reed-Jones has also enlisted the services of nationally noted choreographers Christopher Huggins and Robert Battle to create works for the company.

"My vision for the company is to continue the tradition Dance Alloy has already set," says Reed-Jones. "I want to continue bringing in quality national artists and works, as well as those from our region, and continue and expand our community and outreach programs."

Still with the Alloy are its five dancers from the past season: Christopher Bandy, Stephanie Dumaine, Maribeth Maxa, Adrienne Misko and Michael Walsh. For the company's first main-stage production this season, Alloy Unlocked ... Part 1, Reed-Jones and company will present two premieres by local choreographers along with two popular repertory works.

One of the premieres is "Itch of the Key," choreographed by Pearlann Porter, artistic director of The Pillow Project dance company. "I wanted to do something fictional. To create a story and a world that is part fairy tale and part Oscar Wilde book," says Porter, whose Pillow Project has itself produced a series of well-regarded, multimedia-oriented shows.

In "Itch of the Key," her theme is perception, and how we as individuals act differently when we believe someone is watching us.

The work for all five of Alloy's company dancers, and set to Philip Glass' appended score for Tod Browning's 1931 horror classic, Dracula, is performed and viewed through the narrow beams of light from a projector. Porter characterizes the look and feel of "Itch of the Key" as "cinematic theater," a la silent film.

Porter says she was very selective about what is seen and unseen by audiences, adding to the mystery of the storyline. The work follows a female central figure who, it's implied, is being stalked, leading to a cliffhanger ending.

Where Porter's work will engage the audience's senses to fill in the story, Gwen Hunter Ritchie's "Look me in the eyes" deals with stories of people's sensory sensitivities.

The 30-minute multimedia work in three sections by LABCO dance company artistic director Ritchie is set to original music by Andy Hafenpflug, with video by Stacey Pearl. Inspired in part by the real-life sensory issues faced by Ritchie's young son, the work examines extreme sensitivities to touch, light and sound. Also explored are an array of self-stimulatory sensory behaviors -- nail-biting and finger-tapping -- and how they help or hinder people's ability to communicate and cope with stress. 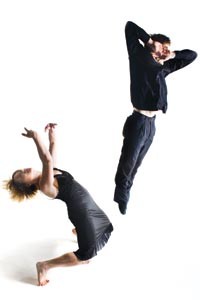