With a majority of Pittsburgh Public School board seats up for grabs, candidates are pushing for racial equity and accountability | Election Guide | Pittsburgh | Pittsburgh City Paper 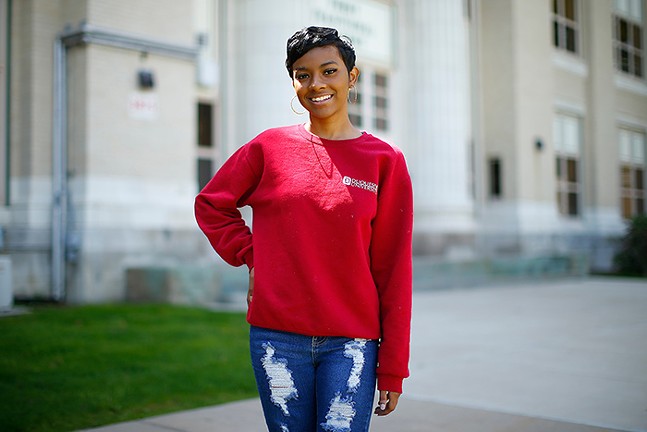 CP Photo: Jared Wickerham
Delancey Walton
The COVID-19 pandemic upended education for Pittsburgh youth in ways the community is still working to recognize. But while some point to the COVID-19 pandemic as the primary culprit for the district’s challenges, education activists and residents say they’ve seen an educational crisis brewing in Pittsburgh Public Schools for some time.

With the impending May 18 primary, candidates running for school board see this moment as a chance to alchemize the educational system to ensure better outcomes for Pittsburgh youth, especially Black students, teachers, and others involved in the district.

Twelve candidates will face off for five school board seats — districts 1, 3, 5, 7, and 9 — a majority of the nine-seat board of Pittsburgh Public Schools (PPS). Four board seats have incumbents hoping to keep their seats after a turbulent school year.

In District 7, a retired teacher leaving the board will be replaced by either an entrepreneur or a social worker. A longtime District 1 incumbent could be replaced by an entrepreneurial, activism-focused chef or a teacher-turned-education consultant with an eye toward equity. District 9 could be led by an incumbent who is a retired district employee, a social services provider with diverse career experiences, or a recent high school graduate intent on bringing the student perspective to the board.

The district is still recovering from the first year of COVID learning, while facing a $39 million budget deficit and worsening gaps between Black and white students in metrics like standardized testing and suspension rates despite efforts by the district.

“It's a lot that's at stake,” said Lamont Frazier Jr., 33, who works in construction and other trades and is challenging incumbent Sala Udin for the District 3 seat. “We just can't, can't keep our school board at a standstill, like progress is at a standstill right now. … Can we really wait another four years?”

One thing the 10 candidates who spoke with PublicSource in separate interviews had in common: they each said systemic district change is overdue. Pittsburgh depends on the district and its leadership to provide 21,000 students with quality education and, in many cases, food and connections to social services.

District leadership will face challenges in the years to come as they enter uncharted territory and the fallout of the COVID-19 pandemic.

The district’s pandemic response was critiqued by most challengers, but the new board will also face difficulties that predate the pandemic, such as decisions on school building closures tied to enrollment declines and racial disparities among students.

A recent Pennsylvania Human Relations Commission report, as seen in the Pittsburgh Post Gazette, showed that, despite district efforts to curb achievement gaps and disparities in educational opportunities, longstanding inequalities between Black and white students were significant.

“We are minimally, and I'm just going to tell the truth, minimally educating children, and I think we can do better. But I believe everybody’s got to work together to do better,” said Edwards, who took office in 2017. She said she’s worked on behalf of the students during the pandemic by hosting a vaccination clinic and being one of few board advocates for an early return to school buildings last fall.

Edwards, a retired district employee, faces two challengers — Gene Walker, 44, and Delancey Walton, 18. Carlos Thomas, 30, is challenging Board President Sylvia Wilson for the District 1 seat, specifically citing the district’s struggle to transition to virtual learning. Wilson has held the seat since 2013 and was first nominated board president in December 2019.

“The reality of it is that our school board hasn't, our entire system of education hasn't shown that it cares about its kids, the community it sits in for years. It didn't just start happening in 2021,” said Thomas, a chef and PPS graduate, adding that the district must reconnect with the community and its needs.

Wilson, a retired teacher, faced no opposition in 2017. Now campaigning for a third term, she faces two challengers — Thomas and Grace Higginbotham, 36. Wilson did not respond to requests for comment for this story.

“We've only seen declines just about in every single area” during Wilson’s terms, she added. “And there needs to be a change of the guard.”

She said the board needs transparency and integrity, and accountability from members, “which we don't have with the current incumbent.”

CP Photo: Jared Wickerham
Jamie Piotrowski
Fresh perspectives
Numerous challengers come to the race with life and career experiences that could diversify the board makeup, from entrepreneurism to social work. Incumbents running for reelection are mostly retired and have worked with the district for years.

Thomas said most local politicians, including Wilson, have “become a staple.”

He believes he’d bring a different perspective. As a single father to two, he said he’s focused on equity and issues like food insecurity and the school district’s responsibility to provide nutritional meals.

Higginbotham is a Homewood resident and education consultant. She grew tired of talking about how dissatisfied she was with the district, so she decided to run. She hopes to build trust with the community and bring teachers to the table regularly to give the board real-time feedback on students.

CP Photo: Kaycee Orwig
Lamont Frazier Jr.
Walton, who’s challenging Edwards for the District 9 seat, is a freshman at Duquesne University who graduated from Montour High School in the midst of the pandemic. The district, she said, has great resources, programs and teachers, and there’s so many positive things not discussed enough, like the Pittsburgh Promise scholarship program and the StandTogether program helping students address mental or substance use disorders of their peers. The main difference she sees between her and her opponents is her recent firsthand experience in school — a perspective that doesn’t exist beyond solicited student feedback.

District 7 is destined to change when retired teacher Cynthia Falls vacates the seat she’s held since 2013. Falls will be replaced by either entrepreneur and activist Khamil Scantling or Carrick social worker Jamie Piotrowski.

Scantling, 33, is a mother to two kids who will both attend Urban Academy Charter in the fall. She said she thinks the district is giving students the short end of the stick in education. She wants to bring corporate social responsibility to the district, making it an efficiently run business whose core customers are the students.

CP Photo: Kaycee Orwig
Sala Udin
“I think they're doing things kind of business as usual, but that's not what people need,” Scantling said. “People need new ideas, transformative ideas, like they need the problems that they face currently to be addressed as opposed to, you know, again, very status quo solutions to problems.”

The pandemic, she said, is a great opportunity to consider a system redesign to better serve its students.

Piotrowski believes her social work, systems-approach will be what the district needs as it embarks on the next few years. Schools will be an indispensable resource for families recovering from the pandemic, she said, and the district needs to be ready.

CP Photo: Jared Wickerham
Carlos Thomas
Activism for equity
Advocacy and accountability are at the forefront of the school board race. Five challengers are being touted by Black Women for a Better Education (BWFBE), which announced a PAC in early February to endorse candidates for each of the districts up for election.

The advocacy group emerged last summer with a letter signed by 55 women addressed to the PPS board of directors asking the board not to renew Superintendent Anthony Hamlet’s contract. At the time, the coalition cited Hamlet’s financial management, crisis management in the pandemic, high rates of student referrals to the police, stagnant test scores, and worsening achievement gaps for Black and white students.

Udin, 78, is the only incumbent endorsed by BWFBE and is one of two board members who voted in August against the renewal of Hamlet’s contract. At the time, he said he felt it was a mistake to make a decision months before a vote was required. He also referenced persistent inequities in reading and math scores between Black and white students, ongoing investigations, and the controversies surrounding Hamlet’s arrival in Pittsburgh.

Udin took office in December 2017 and four years later, the Hill District resident casts his campaign as serving people who are dissatisfied and demand change.

“School board members should have their hair on fire when they look at the low level of achievement and basic educational knowledge and skills of our children,” Udin said. “They should be excited and screaming for change. But we're not. We're just kind of complacent with mediocrity.”

His hope is that re-election will lead to a radical shift on the board’s approach to accountability. “A school board that is more assertive and more willing to hold themselves and the administration accountable for quality education,” Udin said.

CP Photo: Jared Wickerham
Khamil Scantling
Udin suggested the main difference between him and his opponent is that Frazier hasn’t shared a clear “strategy for change,” making him part of a continued status quo.

Frazier, however, said he wants to build partnerships and “offer solutions rather than just criticisms.”

“I want to get the politics out of the decision-making that is being made on behalf of our kids and our schools,” Frazier said. In addition to Udin, BWFBE endorsed Higginbotham, Scantling, Walker, and Tracey Reed.

Walker, a 1994 graduate of the district’s former Peabody High School, is a parent shepherding his kids through school and a professional with a background in nonprofit leadership, business management, marketing, and financial management — all things he says will bring a new perspective to the board. He currently works as a provider of direct support services for adults with intellectual disabilities.

Walker said he would have voted against renewing Hamlet’s contract, unlike Edwards.

“My experience over the last four years has been that we've let too much slide and have not required our superintendent to be accountable for the outcomes of our students in the way that he should be,” Walker said.

CP Photo: Jared Wickerham
Gene Walker
Reed, who’s had two children in the district, considers herself a friendly critic of PPS. In her work, now with The Grable Foundation, she’s always been concerned with how schools serve historically underserved groups. Reed is challenging Terry Kennedy, the board’s second vice president who has occupied the District 5 seat since 2013. Kennedy did not respond to requests for an interview.

Reed said she is running because she worries about students being underserved by the district, including Black students, high-needs students, and English language learners.

Some district leaders have adopted the false idea that poor youth “are not as likely to be able to do hard work and to learn at high levels,” Reed said. “That is just absolutely not the truth.”

“We cannot absolve ourselves of responsibility when they are not achieving. It's not because of the kids; it's because of the way we're doing school.”