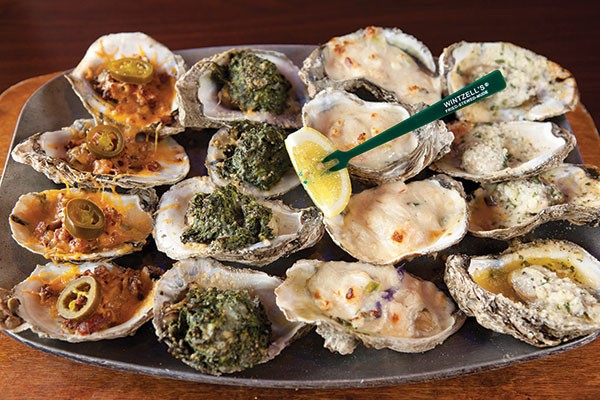 There are any number of specific reasons we find local restaurants more appetizing than chains, but they all boil down to one thing: a unique experience, as opposed to one that is focus-grouped to please the largest possible dining demographic. But sometimes, through some alchemy of business acumen and sheer popular demand, a local entrepreneur's singular vision spins off into a chain.

Wintzell's Oyster House, a Gulf Coast seafood establishment that originated in Mobile, Ala., in 1938, is one such case. After opening about a dozen locations all around the Cotton State, Wintzell's just opened its first non-Alabama outpost — and, randomly enough, it's right by Century III Mall. Southern-style seafood being scarce around these parts, we set out to investigate.

Pittsburgh's Wintzell's has all the character of a generic mall restaurant on the outside, albeit with a covered patio. But the inside has its own peculiar ambience, thanks to a decor consisting of hundreds of bumper-sticker-sized placards inscribed with sayings (mostly hokey, but a few pithy winners) plastering the walls. This is an homage to J. Oliver Wintzell himself, who began with a six-stool oyster shack, before selling it off in the 1980s to the current ownership, which grew it into a chain. While this facsimile of the original Wintzell's decor won't fool you into thinking you're anywhere you're not, it is at least a reminder that this place has roots.

And those roots remain in the menu, which is dominated by seafood (mostly fried) in a way that few of today's please-everybody places would attempt. There are a few steak, burger, and chicken options, but it's clear that they're the sideshow. Unlike most local seafood houses, which tend toward either New England menus (lobster plus lemon butter on everything) or cosmopolitan, contemporary cuisine, Wintzell's is unapologetically Southern. Pittsburgh, meet grits, gumbo and okra. It's a winning combination, even if it's frankly at odds with seafood's modern reputation as lean, healthy fare.

Our first selection was easy. Wintzell's made its reputation as an oyster bar, after all, so we ordered a dozen oysters on the half shell, prepared four different ways. Classic Rockefeller was superb, the spinach silky atop each briny morsel of oyster. Bienville reminded us of Newburg: tiny shrimp in a creamy sauce covering the oyster, which joined in the rich medley, contributing its salty brine. The other two options — grilled and Monterey — were drier preparations. With shredded cheese and sliced jalapeño pepper, Monterey put us in mind of oyster nachos. The success of these preparations largely hinged on the oyster itself. Where there was sufficient flesh and liquor, there was a tasty blend of flavors, but smaller shells offered little more than an oyster nugget.

Fried oysters were superb: plump and juicy with a light, almost flaky breading. A side of creamed spinach was dominated by the same silky spinach we'd had on the oysters Rockefeller, with just enough cream to enrich, but not enough to make it soupy.

Fried catfish, on the other hand, was a disappointment. We couldn't tell whether the flesh was too fishy, or the coating was too mild to stand up to the fish's naturally muddy flavor. We always prefer cornmeal-breaded catfish for that very reason, but Wintzell's one-breading-fits-all approach failed it here. Hushpuppies served on the side, however, had excellent cornmeal flavor and a nice, light texture within a substantial dark, crunchy crust. 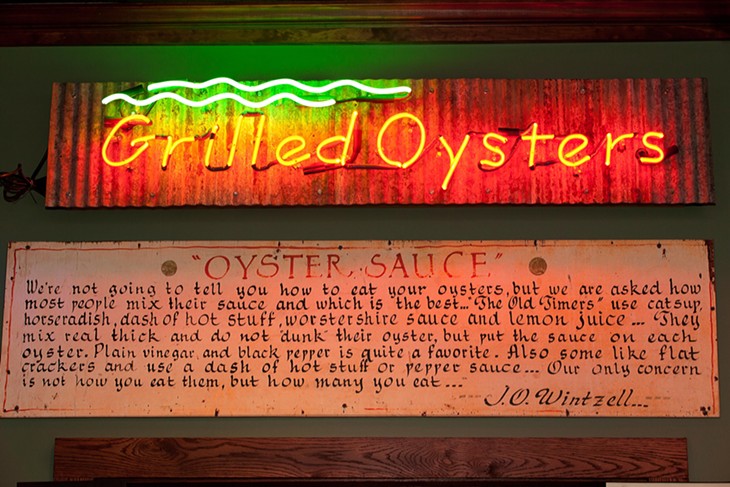 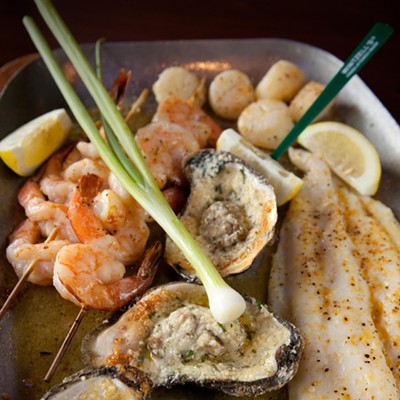 Cheesy grits with shrimp were also terrific. The texture was creamy and porridge-like, the cheese was rich but respectful of the grits' corny flavor, and the tiny, sweet shrimp were plentiful and firm. A puddle of crawfish sauce added depth and brothy umami notes, and a shake from the house hot sauce on the table added a welcome kick.

Wintzell's "Southern BLT" was composed of crabcake, melted cheddar, lettuce, fried green tomato, hickory-smoked bacon and Creole remoulade on grilled Texas toast. We loved the idea, but the execution was greasy, mushy and without much distinctive flavor from any of the ingredients, save the bacon.

Wintzell's may be another replicant in a chain, but it's the only one we've got, and it's unlike anything else in the 'Burgh. That's good enough for us ... and so is the grub.