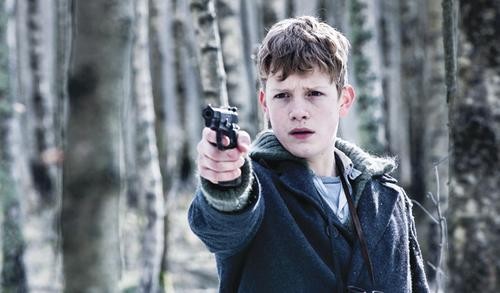 For 14-year-old towhead Michiel, war is something between a child's game and a reality. In January 1945, he lives in a village in the Netherlands, and he watches the war and the Nazi occupiers from his bedroom window, too young to join the resistance. One night, an RAF plane crash creates a spectacular fireball near his home. And so begins his war game, which of course turns spectacularly real. Writer/director Martin Koolhoven keeps Winter in Wartime lean, intimate and quietly unsettling. When Michiel discovers Jack, the RAF pilot -- barely older then he is -- who survived the crash, he helps him recover in his woodland lair. He trusts no one, except his beloved Uncle Ben, and certainly not his father, the town mayor, who collaborates with the occupiers, or so it seems to a boy who wants a taste of war without knowing how bitter it can be. Koolhoven tells his story with palpable tension, although his last half hour is over-plotted, and his climax is an improbable mess. But until it goes bad, his Bildungsroman makes its point effectively, and it's still one worth making, especially in these patriotic times. In English, and Dutch and German, with subtitles. Starts Fri., May 13. Harris