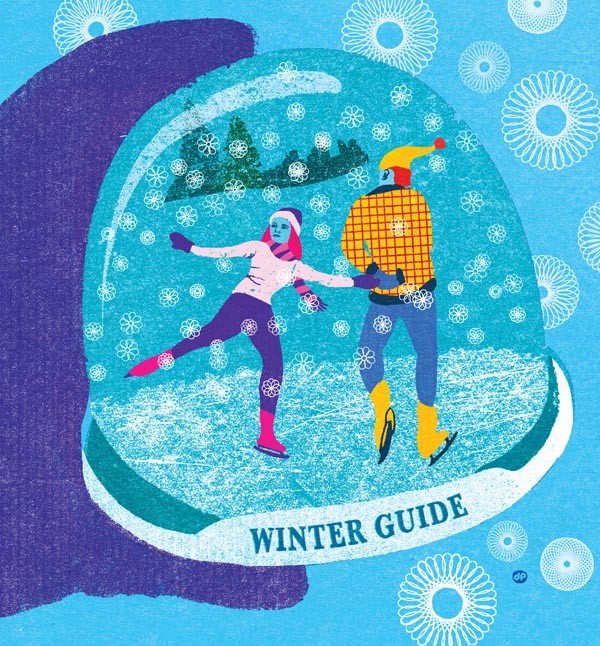 So far, this winter hasn't been marked with piled-up snow and bitterly cold temperatures. All the more reason to shift off the couch and go do something.

Below we've compiled a selection of local happenings that should provide entertainment, edification, exercise and laughs.

And in case Ol' Man Winter blasts back, most of these events are happening inside.

When Madeleine Albright learned that the Iraqi media had called her "an unparalleled serpent," she wore a snake brooch to her next meeting with Saddam Hussein. Learn more about the former Secretary of State's diplomatic campaign of "speaking" with her jewelry in Read My Pins: The Madeleine Albright Collection. Through March 4. Carnegie Museum of Natural History, Oakland. 412-622-3131 or www.carnegiemnh.org

Dawoud Bey's project may change how you think about today's much-maligned teen-agers. He spent 15 years taking large-scale photos of high school kids from a wide economic, social and ethnic spectrum. See his work in Class Pictures, now at the Silver Eye Center for Photography. Through March 10. South Side. 412-431-1810 or www.silvereye.org

Using only paper, cutting implements and light, artist Kathryn Carr creates intricate "shadow puppets" and dioramas. Visitors to Paper Thin Theater can interact with some of the exhibits, creating their own silhouette plays — or simply marvel at the precision handicraft. Jan. 20-Feb. 19. 709 Penn Ave., Downtown. 412-456-6666 or www.trustarts.org

Nobody can deny that chairs have their function, but some rise above the utilitarian to become works of art. The Art of Seating: 200 Years of American Design presents 43 chairs that represent design and craftsmanship, from an ornate chair designed for the 19th-century U.S. Congress to sleeker modern works from Stickley and Eames. Feb. 4-April 8. Westmoreland Museum of American Art, Greensburg. 724-837-1500 or www.wmuseumaa.org

Penn Avenue is known as an arts corridor, but now it's getting a new exhibit space with a more scientific bent, with the grand opening of The Center for PostNatural History, on March 2. The Center promises to enlighten us about the "complex interplay between culture, nature and biotechnology," in particular focusing on organisms that have been altered through selective breeding or genetic engineering. Garfield. www.postnatural.org

If you think chipping away at ice is a seasonal grind, then treat yourself to a visit to the Ligonier Ice Festival. There you can watch artisans turn huge blocks of ice into sculpture. Then stroll the Diamond area for shopping and other festivities. Jan. 21 and 22. Ligonier. 724-238-4200

You know who probably doesn't think it's too cold to go for a walk? Some of the dogs waiting at the Animal Rescue League for new homes. Put some lift in your step — and in that of a four-legged buddy. Check with the ARL for how to become a volunteer. Larimer. 412-661-6452 x235 or www.animalrescue.org

You need the extra calories when it's cold, so why not combine your walk with candy canes, apple cider, s'mores, soup or beer? Venture Outdoors organizes grub-themed hikes and many more every weekend. www.ventureoutdoors.org

Plenty of time left to get some ice skating in. Downtown's Rink at PPG Place is open until March 11 (www.ppgplace.com); and both North Park and South Park have skating facilities open through mid-March (www.alleghenycounty.us). For skating sweethearts, the Schenley Park Rink offers a couples-only night on Valentine's Day (www.citiparks.net).

It's no ordinary bird: The bald eagle is the official emblem of our country, and in recent years has made a remarkable comeback from near-extinction. Find out more about this majestic predator of the skies during the America's Grand Birds weekend at the National Aviary. Jan. 21 and 22. North Side. 412-323-7235 or www. aviary.org

We celebrate the engineers of our past, but the future needs folks to put things together and make stuff run, too. Get the kids started early at the Carnegie Science Center's Engineer the Future weekend. There will be hands-on activities, demos, contests and working engineers sharing their knowledge. Feb. 17 and 18. North Side. 412-237-3400 or www.carnegiesciencecenter.org

Bunnies are a sure sign of approaching spring. Catch up with some of those cuddly furry critters at Max and Ruby: Bunny Party. In this live stage adaptation of the Nickelodeon show, the two rabbit siblings try to stage a surprise birthday party, but everything gets charmingly tangled up. March 9 and 10. Byham Theater, Downtown. 412-456-6666 or www.trustarts.org

Jen Childs visits with her touring one-woman comedy Why I'm Scared of Dance, about her days as an aspiring dancer. "Those who can't do, mock," she notes. The show includes parodies of dance numbers from Broadway classics like West Side Story. Feb. 2-12. City Theatre, South Side. 412-431-2489 or www.CityTheatreCompany.org

A middle-aged man with six months to live seeks out the majorette who was his high school crush in Mid-Strut, a world-premiere play by first-time playwright Eric Burns. The Ambridge, Pa., native made his mark in TV journalism and as a non-fiction author. Feb. 2-19. Point Park REP, Oakland. 412-392-8000 or www.pittsburghplayhouse.com

Performance artist Young Jean Lee last visited with The Shipment, a brilliantly confrontational stage show about racism. She returns to The Andy Warhol Museum's Off the Wall series with We're Gonna Die, a cabaret-style evening featuring her new band, Future Wife, and a dark song cycle about life's futility. Feb. 17. North Side. 412-237-8300 or www.ticketweb.com

Choreographer Karole Armitage — known for her collaborations with experimental composers and contemporary artists, and work on videos for the likes of Madonna — has forged a celebrated international career as "the punk ballerina." Pittsburgh Dance Council presents her company Armitage Gone! performing its 2010 work Three Theories, inspired by physicist Brian Greene's book The Elegant Universe. March 3. Byham Theater, Downtown. 412-456-6666 or www.pgharts.org

If you're looking to step back in time, catching Miss Tess and the Bon Ton Parade is a good bet: The jazz/Dixieland/Western-swing outfit from Brooklyn via Cambridge, Mass., provides a genuine old-timey good time. Jan. 27. Thunderbird Café, Lawrenceville. 412-682-0177 or www.thunderbirdcafe.com

If you backed her on Kickstarter last year, you've already heard Jenny Owen Young's latest, An Unwavering Band of Light. If not, seeing the cheery Brooklyn songbird with the dry sense of humor live is a good way to experience it for the first time. Feb. 7. Brillobox, Bloomfield. 412-621-4900 or www.brillobox.net

Here are two names that need no introduction: Trey Anastasio and the Pittsburgh Symphony Orchestra. The Phish leader sits in with the PSO to provide a Valentine's Day destination for jam-band lovebirds to die for. Feb. 14. Heinz Hall, Downtown. 412-392-4900 or www.pittsburghsymphony.org

The Pittsburgh Jazz Orchestra, under the direction of trumpeter Sean Jones, never fails to impress. Tonight it brings another homegrown virtuoso, percussionist Jeff "Tain" Watts, to do battle with Philly's Christian McBride in a "Pittsburgh vs. Philadelphia" program. Feb. 18. August Wilson Center, Downtown. 412-258-2700 or www.pittsburghjazzorchestra.com

Heavy-rock outfit O'Brother is back with a new full-length, Garden Window. Tonight the band, touring with fellow epic rockers Junius, pulls into town to melt faces. Feb. 21. Stage AE, North Side. 412-229-5483 or www.stageae.com

Alt-country songstress Eilen Jewell calls her latest effort Queen of the Minor Key, which should tell music heads everything they need to know — even her happiest tunes tend to have a sinister, or at least sarcastic, undertone. March 1. Club Café, South Side. 412-431-4950 or www.clubcafelive.com

The weirdest show on this winter's schedule may belong to Puscifer, the rather vulgar side project of Tool's Maynard James Keenan. It's undefined, it started as a joke and it may tangentially involve Milla Jovovich. Good enough for you? March 1. Byham Theater, Downtown. 412-456-6666 or www.trustarts.org

John K. Samson started out in Propagandhi, rose to more mainstream popularity leading the literate folk-and-rock outfit The Weakerthans, and is now back to just being John K. Samson. His solo debut, Provincial, was issued this month by ANTI-. March 16. Club Café, South Side. 412-431-4950 or www.clubcafelive.com

Spirit of Uganda mixes music — mostly African drumming — with dance, in a demonstration of the culture of Uganda. It stars talented Ugandan children and teens, and is in town for one night only. March 18. Byham Theater, Downtown. 412-456-6666 or www.trustarts.org

Last time Bela Fleck and the Flecktones were scheduled to appear in town, there was a last-minute cancelation; tonight's your second chance to check out the banjo jam man and his fantastic band. March 26. Carnegie Music Hall of Homestead, Munhall. 412-368-5225 or www.librarymusichall.com

It's been two years since Bear in Heaven issued its previous album, Beat Rest Forth Mouth. Due in early April is I Love You, It's Cool, the band's debut for Dead Oceans; catch the trio's entrancing live show tonight. March 28. Andy Warhol Museum, North Side. 412-237-8300 or www.warhol.org

During the 20th century's "Great Migration," African Americans moved from the South to work in the industrial Midwest. Pittsburgh Arts & Lectures' Monday Night Lecture Series welcomes two authors — Michele Norris (The Warmth of the Sun) and Isabel Wilkerson (The Grace of Silence) — to discuss the personal and historic aspects of this significant demographic shift. Jan. 30. Carnegie Music Hall, Oakland. 412-622-8866 or www.pittsburghlectures.org

Spend a winter's night hearing from folks who know all about winter. The Intercultural Project presents Midwinter Russian Classics, an evening featuring readings from the works of Pushkin, Chekhov, Gogol and others. There will also be music, and a reception to follow. Feb. 17. Frick Fine Arts Building, Oakland. mwclassics@gmail.com

It will be straight-up automotive mayhem when the USHRA Monster Trucks tear up the dirt at Monster Jam 2012. We may be an advanced civilization, but it never gets old watching ginormous tricked-out trucks flip over, crush smaller cars and belch flame. Also, celebrate Grave Digger's 30th birthday. Feb. 17-19. Consol Energy Center, Downtown. 800-745-3000 or www.consolenergycenter.com

Motor enthusiasts used to flock to the biggest, loudest, fastest and shiniest cars at the Pittsburgh International Auto Show. They still do, but these days, the high-tech "green" rides get plenty of looks, too. Stop by to find your dream ride. Feb. 17-20. David L. Lawrence Convention Center, Downtown. www.pittautoshow.com

Is this the year you spring for marble countertops in your kitchen? Or a whirlpool tub in the back yard? Perhaps you'd just like tips on how to make your house more energy-efficient. Investigate these possibilities and many more at the Pittsburgh Home and Garden Show. March 2-11. David L. Lawrence Convention Center, Downtown. www.pghhome.com

You love Adam Savage and Jamie Hyneman on their Discovery Channel show, where the duo debunks tall tales, urban legends and just plain bad science. Now fans can see the Mythbusters live for an evening of on-stage experiments (with audience participation!), behind-the-scenes tales and video entertainment. Dress to be amazed. March 27. Heinz Hall, Downtown. 412-392-4900 or www.trustarts.org

Before Batman-mania hits this summer, a smaller film will feature Pittsburgh up on the big screen. Maggie Gyllenhaal and Viola Davis star in a drama about two mothers who join forces to improve an inner-city school. Won't Back Down is set to open March 30.