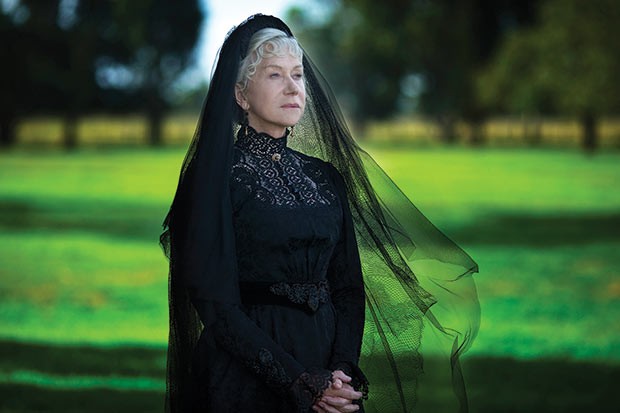 If you build it … they will leave: Helen Mirren portrays Sarah Winchester

As a kid, I toured the Winchester Mystery House, in San Jose, Calif., and was instantly entranced with its legend. The 100-plus-room Victorian had been the home of Sarah Winchester, the wealthy widow of the man who invented the Winchester Repeating Rifle. Reputedly obsessed with the deaths of those killed by Winchester rifles, Mrs. Winchester adopted a novel solution: She could keep these tormented souls at bay through the non-stop construction of her home.

And it hardly mattered what — rooms were built, taken apart and rebuilt; stairways led to ceilings; a room was built without nails; and a séance room, in which Winchester received building instructions from the beyond, had one entrance and three exits. It wasn’t just the fanciful nature of the structure that was captivating; for an avid reader of dark fairy tales like Winchester, the belief that she could cleanse her blood guilt by building a maze-like castle made complete sense.

And now there is Winchester: The House That Ghosts Built, an “inspired by actual events” spooker, directed by Michael Spierig and Peter Spierig. The film, set in 1906, establishes a classic night-in-a-haunted-house plot, in which a doctor (Jason Clarke) is sent to assess the mental stability of the widow Winchester (Helen Mirren). Naturally, the doctor is unconvinced, until a bunch of specters disturb his sleep.

But mostly the doctor is persuaded by Winchester’s arguments, in which her guilt informs a certain logic. Of course, people who were killed with the namesake gun are angry, and doubly so that she lives in finery on its blood-soaked profits. Mirren, who seems to be having fun doing a campy widow’s-weeds thing, delivers all the existential mumbo-jumbo with plenty of arch authority. What man wouldn’t be cowed?

And these philosophical explorations are the best part of the movie. (Sadly, as a ghost thriller, Winchester is quite boring.) As ludicrous as the story is, the issues raised about profiting on the miseries of others and, more specifically, about how accountable a gun manufacturer is for the deaths its products cause, are lively contemporary debates. Another modern thread running through the film was another cost of violence: the unresolved PTSD suffered by Mrs. Winchester, the doctor and the ghosts. If only the Spierig brothers had made a thoughtful drama, inspired by a real-life eccentric, rather than a dull thriller, barely propelled by jump-out scares and creaky hallways.

And if you’re ever in the San Jose area, and not afraid of ghosts, take a tour of the actual house, now up to 160 rooms. It’s infinitely more memorable than this film.

All I See Is You