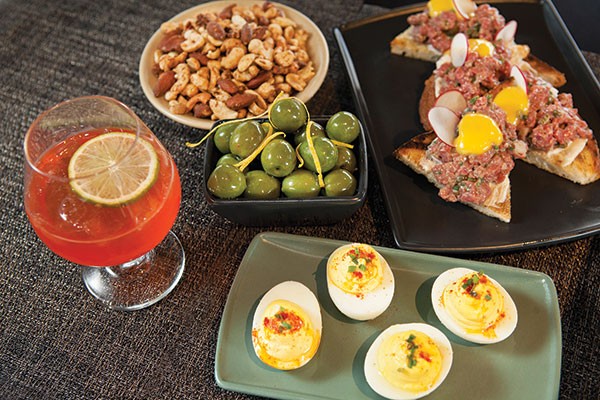 When we first went to Willow, almost 10 years ago now, it was at the vanguard of a trend that's become so commonplace, it isn't even trendy anymore: upscale, urbane restaurants in the far suburbs. Willow has now changed ownership. S+P Restaurant Group, whose portfolio includes Spoon, Grit & Grace and BRGR, has remodeled what we once called Willow's "enchanted forest of dining rooms" without changing its essential, warmly contemporary ambience. The original custom ironwork still evokes the pliant branches of the restaurant's namesake, while au courant updates like glass tiles and walled patios update the restaurant's aesthetics and overall dining experience.

And, where the old guard threw some bones to old-school Pittsburgh dining with items like steak salad with fries, the new has a menu that is resolutely up-to-date, if not quite cutting-edge. Steak frites and roasted Brussels sprouts are — deservedly, in our opinion — enjoying their moment, but we can't pretend that they're news at this point. That shouldn't be taken as criticism: Willow's kitchen has assembled a one-page menu, divided among snacks and salads, small plates and large, that is almost universally appealing. It is the kind of menu that tempts us to simply ask our server to bring us half-a-dozen dishes, whatever they might be.

The snacks were mostly bar food — spiced mixed nuts, deviled eggs, olives. We were tempted by the steak tartare, but began instead to order from the small-plates section. In our dish of roasted Brussels sprouts, the sizes varied, meaning that some were crisped and others a tad underdone. Variety is nice, but the span here may have been a bit too wide. Willow isn't parsimonious with ingredients, and the sprouts came with apple, sage, pecans and bacon vinaigrette. This classic fall combination of flavors got along very well, but the pecans, chopped fine, predominated: A mound was left in the bottom of the bowl when all the rest was gone.

We had the exact same comment about our entrée of agnolotti — stuffed pasta similar to ravioli — which were filled with ricotta and served in autumnal sage brown-butter sauce with gently wilted spinach, earthy kabocha squash and too many pecans.

There was nothing left but shells once we polished off the mussels. The shellfish were plump and tender and the coconut-curry broth, flavored with seafood-friendly lemongrass, lime and cilantro, and studded with bold rings of Fresno chiles, was good enough to eat with a spoon. Our server helpfully brought a second basket of garlic toasts. Marked with grill lines and sprinkled with fresh parsley, these were good enough to deserve a spot on the snack list themselves.

The obligatory fancy burger (three cuts of ground beef, brioche bun) was quite pricy, but did come with a choice of cheese and two toppings from a short but enticing list. We picked bacon-whiskey jam and crispy pork belly. One slice of pork belly offered that addictive contrast between succulent flesh and crisp surface, but another was, essentially, crispy bacon. We loved the jam, which was perfectly balanced between smoky, boozy and sweet. A good thing, because the burger itself, while juicy and tender, was a bit under-seasoned, perhaps in anticipation of all those richly flavorful toppings.

Hanger steak, however, was practically perfect in every way: rosy slices with hefty, well-seasoned crust that offered just a hint of chew. Bearnaise sauce was thick and intense, possibly to a fault, but we appreciated it on the side. The accompanying garlic-herb frites offered a similar textural range to the sprouts, but in potatoes, it was more appealing.

Jason was a bit concerned when the two options for his pork chop were medium or medium well, but the kitchen knew what it was doing: His medium chop remained slightly pink inside, and the meat was tender and moist. The surface wasn't deeply crusted, but some char had formed, adding another layer of flavor beneath a delicious apple-and-fennel kraut that floated between fresh-tasting and a pleasingly fermented brine. In a surprising move, grain mustard was mixed with the deeply browned roasted potatoes on the side, resulting in the mustard flavor getting a touch muddled.

In all, Willow's new ownership has pulled off a neat trick. In refreshing a minor local landmark, it has maintained its enchanting character, while raising its culinary offerings to the highest level yet.