William Bouguereau, his students and his up-and-down artistic reputation are on display at the Frick. | Features | Pittsburgh | Pittsburgh City Paper

William Bouguereau, his students and his up-and-down artistic reputation are on display at the Frick.

In the last part of the 19th century, many American artists traveled to Paris, then the epicenter of the art world, to study with the likes of William Bouguereau. Bouguereau, the focus of In the Studios of Paris: William Bouguereau and His American Students, at the Frick Art Museum, was one of the most commercially successful painters of his time, as well as a revered instructor. He taught at the Académie Julian and at the famous École des Beaux-Arts, and his students included soon-to-be famous Parisian artists such as Henri Matisse -- who did not necessarily share in the praise of Bouguereau.

Indeed, as a painter, Bouguereau has also not always been venerated. Since the mid-1860s, his reputation and popularity have fluctuated, perhaps because of the overly sentimental nature of his subjects, which often included Arcadian themes, genre scenes of idyllic families, or virginal peasant girls. For example, in "Young Love" (1889), a girl clad in a flowing white, classically styled robe sits with her hands crossed daintily in her lap, and leans onto an unbroken urn (symbolizing virginity) while a cupid child flits nearby, appearing to caress her hair and shoulder. A not-so-subtle allegory.

Bouguereau did sometimes attend to more serious subject matter, but these paintings did not garner the same commercial success. Though he won acclaim in his lifetime (1825-1905), including the Prix de Rome in 1850, Bouguereau eventually fell from critical favor. One 1907 article expressed regret that Bouguereau made his talent the servant of stark commercialism. Another particularly scathing review, from 1945, claimed that he lacked "artistic consciousness." In the 1970s and '80s, however, Bouguereau's work began to appear in major museum exhibitions, an upswing that continued in 1984 with a full-scale internationally touring retrospective.

If one looks past the insipid themes in many of Bouguereau's paintings, and views them through a contemporary lens, it is -- ironically enough -- easier to appreciate the work. For example, "Italian Peasant Girl" presents a masterfully painted young woman who looks out, confrontationally. Her headdress of red and yellow flowers is more thickly painted and "pops" from the canvas. Though she is painted with a photographic realism, the background is more sketchily rendered, making it seem as if she were in front of a painted backdrop. The slightly disjunctive quality of the work makes it seem, strangely, postmodern.

Gardner, Bouguereau's most fervent pupil, is highlighted. Bouguereau, who was instrumental in opening academic study to female students, eventually married Gardner, who painted in a style very similar to Bouguereau's. Such imitation was viewed somewhat unfavorably, although Gardner did achieve great commercial success. A delightful painting titled "Daphnis and Chloe" (1882), shows Gardner's mastery of the materials and the energy of brushstroke that sometimes seems lacking in Bouguereau's own more reserved paintings, exemplified by Gardner's loose, thick paint application on Chloe's white garment and flowered headdress.

Much of the exhibition, including a notable work by Eanger Irving Couse titled "Pueblo Water Carrier" (c. 1925), exemplifies how artists combined Bouguereau's strong classical instruction with more American themes. Couse borrows popular subject matter -- a young woman holding a vase -- from Bouguereau, but replaces the European peasant with a North American Indian girl and adds an impressionistic color palette. An early painting by another student, Anna Klumpke, titled "In the Wash-house" (1888), is rooted in the traditions of French academic painting. Yet in Klumpke's "Among the Lilies," completed almost 25 years after she studied in Paris, the color palette, brushstroke and ethereal nature of the scene depicting a lone female figure suggests the influence of Impressionism and Symbolism.

This impressive exhibition invites us not only to look anew at Bouguereau's work, but to reconsider his influence on American painting.

In the Studios of Paris: William Bouguereau and His American Students continues through Oct. 14. Frick Art Museum, 7227 Reynolds St., Point Breeze. 412-371-0600 or www.frickart.org 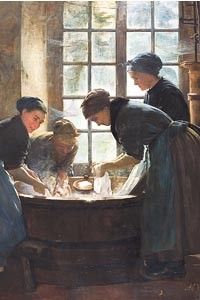