Will Oldham takes stock of his 2012 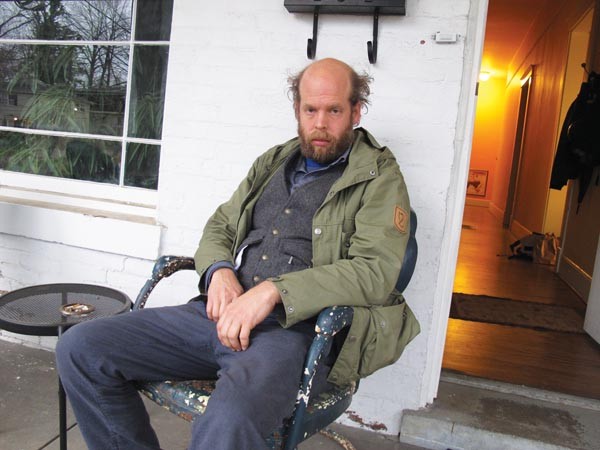 The "prince" who looks a pauper: Will Oldham

On deep matters, such as his appreciation for The Everly Brothers, Will Oldham's eloquent commentary illuminates. On more mundane topics, he'll still surprise you. New Year's resolutions? Not until spring.

"It's impossible, in these dark, heavy, cold dead days of winter, to do anything of value other than just sit and cogitate," says Oldham, speaking via phone from the road. "Not being a specifically religious human, I still find celebrations of the spring — of May Day or Easter — to be relevant."

Best known for performing and recording under the name Bonnie "Prince" Billy, Oldham has worn many guises since his 1992 debut on Drag City Records — a shifting musical identity that has long evoked a certain mystique. His 20-year career shows remarkable vitality, thanks to varied projects — sometimes new material, sometimes recasting his old songs or reinterpreting others' music — and a kaleidoscope of collaborators, ranging from Nashville session musicians and guitarist Matt Sweeney (Zwan, Chavez) to influential post-rock band Tortoise.

Little wonder, considering his prodigious output in 2012: the collaborative album Marble Downs, with Trembling Bells; the six-song EP Now Here's My Plan; two singles; and his autobiography, Will Oldham on Bonnie "Prince" Billy.

For the autobiography, long-time friend and collaborator Alan Licht interviewed Oldham, then distilled their conversations into the 400-page book, published in September by W.W. Norton. Oldham says he enjoyed working with Licht and the book's illustrators, but that the project was more involved than he anticipated, and more the publisher's idea than a personal goal.

"Steve Albini read the book and said, ‘You have a really good memory!' And that was reassuring to me, that I still have something like a memory," Oldham says. "Maybe it's a good thing that [the book] exists, but yeah," he says, laughing, "I definitely won't do it again!"

When Oldham plays at Carnegie Lecture Hall on Sat., Jan. 26, he'll be backed by Emmett Kelly and Cheyenne Mize, musicians with whom he recorded 2009's Chijimi EP. Over the years, Oldham says, the three have "toured a fair amount in a larger group but also as this trio."

Opening the show is a group called Title TK, consisting of the aforementioned Alan Licht, artist and curator Howie Chen and multimedia artist Cory Arcangel, whose Masters exhibit is currently on display at the Carnegie Museum of Art. (While Oldham and Arcangel produce very different work, Oldham says they might be said to share a "sense of challenge or sense of annoyance or sense of fun.")

Oldham closed out 2012 with another milestone: his first holiday record. He likes Christmas music, and his favorites in the genre include the likes of The Jackson Five, Johnny Cash and Dwight Yoakam. (And James Brown: "The first time I heard it, I thought, ‘Wow, this singer's amazing! It sounds like James Brown, but James Brown doesn't sing this intimately.' And then I found out it was James Brown.")

For his holiday single "Christmas Eve Can Kill You," Oldham duets with Dawn McCarthy, their entwined voices rising and falling on lyrics like "The sound of one man walking through the snow can break your heart / but stopping doesn't help, so on I go." Oldham's warble makes him an acquired taste for some, but here his voice is direct, expressive, entreating.

The song, released just in time for Christmas as a 7-inch single and video, serves to introduce a grander project: What the Brothers Sang. The album, due in February, finds Oldham and McCarthy tackling a collection of songs learned from Everly Brothers records.

The Everlys are perhaps best known for their trademark close-harmony singing and 1950s hits like "Wake Up Little Susie" and "All I Have to Do Is Dream." But Oldham, a longtime fan, finds much more in their music. (Oldham discusses three of his favorite Everly records on CP's music blog.)

"There's something about the way they express intimacy," Oldham says, "the way they push their voices when they're getting fully out there, either in ecstasy or agony." He finds Don Everly's 1960s work particularly innovative: Instead of pushing his voice like a soul singer, Don "starts finding crazy notes that he can still hit clear as a bell, but the weirdness of the note is what expresses the emotion," Oldham says. "Rather than distressing his voice, he distresses the melody."

What the Brothers Sang is intended to showcase the complex material the Everlys wrote and explored, says Oldham — especially their overlooked later work. "It's kinda just wanting to dig in and make a fucked-up record, in the spirit of their great fucked-up records of the late '60s and early 1970s."

Oldham's New Year's resolutions may have to wait until spring — "when you can actually take them on and do something about them" — but he's already off to a great 2013.