CP photo: Jared Wickerham
The St. Peter and Paul Roman Catholic Church in East Liberty
The majestic Gothic edifice sits visibly damaged, but not completely destroyed. It’s shocking to those who see its architecture as a unifying cultural asset transcending any specific religion, and also to those who experience it as a unifying space for revitalizing a sense of community.

But do you mean the Cathedral of Notre Dame in Paris or the church of Saints Peter and Paul in Pittsburgh’s Larimer neighborhood? The comparison is only absurd until you realize how instructive it is. We are, as Brian O’Neill titled his book, "The Paris of Appalachia."

In either case, the capacity to repair it and put it back to use will be a telling commentary on our abilities to navigate interchanges of art and justice. Neither is sufficient without the other.

On April 14, the roof of the Paris cathedral became an alarming conflagration that threatened to destroy the entire structure (which survived with severe, but repairable damage). News of the fire in the eight-century-old landmark brought boundary-crossing expressions of sympathy among immigrants and non-Christians, as well as the faithful.

After the recent fire, though, divisive controversy erupted when a sequence of French billionaires and associated corporate conglomerates offered 600 million euros for reconstruction. Isn’t this profligate wealth while workers are struggling exactly why French activists the gilets jaunes, or yellow vests, had been protesting for higher taxes on the rich? The ease with which the wealthy moved to appropriate the cathedral’s cause led to division on an issue that had been unifying.

In this moment, our city has an advantage over our friends in Pittsburgh on the Seine, because our precarious Gothic church (okay, one of many in this city) has a process that prioritizes justice in revitalizing its art.

The East Liberty Development Initiative (ELDI), led by strategists from locally-based ULEAD consultants and collaborating with Partners for Sacred Places in Philadelphia, held walk-through information gathering sessions on April 4 and 16 as part of an ongoing process to solicit neighborhood input about how best to reuse the church in whatever its next incarnation may be.

“We need input from residents and people who live near here, people that have interacted with this space in the past," says Noble Smith of ELDI.

These days, Saints Peter and Paul is in decline largely due to abandonment and neglect. It was closed by the Catholic church in a 1992 reconsolidation. A late-1990s effort to reuse it with an associated charter school did not succeed.
Constructed in 1891 to designs by Adolphus Druiding and substantially rebuilt after a fire in 1909 by John T. Comès, the building is no Notre Dame, but its two major architects were both nationally regarded practitioners. They each had a German-influenced take on the pointed arches, ribbed vaults, and buttresses of Gothic architecture that shares a sense of the aspirational monumentality that makes the eminent Parisian structure an international touchstone.

Memories abound of its role in the Catholic community, but people love its architecture regardless of religion.

Its condition is both worse and better than you might expect. Decades of abandonment have resulted in a general state of ruin with pervasive dust amid dilapidated staircases and falling plaster, though these sections are cordoned off.

In 2012, Kendall Pelling of ELDI lamented the bad condition over the beautiful architecture in comments to the Post-Gazette. “Right now, it defines the [neighborhood] as decay and abandonment.” 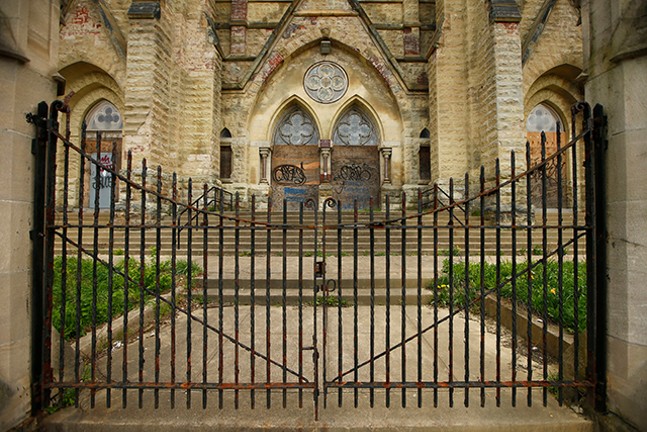 CP photo: Jared Wickerham
The St. Peter and Paul Roman Catholic Church in East Liberty
But a feasibility study from that year found it to be structurally sound, even after squatters had started at least three different fires. Subsequently, a deal completed in 2016 allowed the East Liberty Development Initiative to acquire the building with funding from the URA to abate asbestos, repair the steeples (which are still missing roofing material), and repair the roof, stabilizing the building substantially.

In fact, the persistence of such beautiful architecture allows buildings to broaden their constituencies and communities over time. In Pittsburgh, neglect of under-served communities has been a decades-long problem, and now gentrification is a contrasting, but similarly dangerous threat, as certain profiteering real estate developers push long-time residents out.

But starting with a grassroots view of what the neighborhood wants in a beloved landmark is the right approach to stave off both threats, allowing both community and architecture to be lasting legacies that new buildings struggle to cultivate.