Wildlife is an intimate drama about marriage, pride, and wildfires

The characters are deeply flawed, and too enamored with the possibilities of life to have control over their reality. 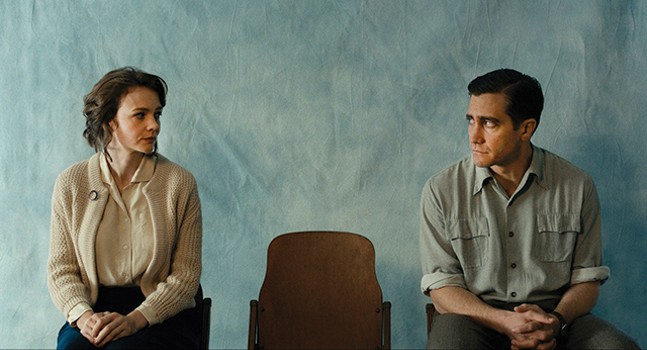 IFC Films
Carey Mulligan and Jake Gyllenhaal in Wildlife
Marriage is hard, and so is taming wildfires. Sometimes they bear a striking resemblance, as in Wildlife, an intimate drama directed by Paul Dano, who wrote it with real life partner Zoe Kazan. It's based on a novel of the same name by Richard Ford. Set against the backdrop of a sprawling Montana town in the 1960s fending off encroaching fires, the movie is an empathetic look at a collapsing family.

A wildfire rages nearby the home of Jerry (Jake Gyllenhaal), Jeanette (Carey Mulligan), and their 14-year-old son Joe (Ed Oxenbould). They seem to be a happy family until Jerry gets fired, which damages his precarious pride. He thinks the only way to heal his wound is by volunteering to fight the wildfires instead of looking for a more stable and less dangerous job. The change is hard on the whole family, especially Jeanette, who begins to have a nervous breakdown, that intensifies over the week Jerry is gone. With absent parents, literal and figurative, Joe has to learn to raise himself and catches sordid glimpses into adulthood.

Wildlife closely explores the intersection of pride, class, and marriage. Jeanette is a typical housewife of the era, who set aside her career and aspirations to be the homemaker of her husband’s dreams. But when he leaves, risking his life despite other options, Jeanette suddenly sees all the possibilities she’s been missing out on. She’s only 34, but feels freedom has passed her by. She finds joy in bright colors, slinky dresses, brown liquor, chain-smoking, and a repulsive affair. But her passion veers into hysteria as she forgoes her responsibilities as a wife and mother in favor of self-destruction. While she’s drunk, trying on her favorite flirty outfits, Joe bikes to the store to buy himself canned soup for dinner. When Jerry returns, his pride is damaged again, but this time the consequences are more straightforward.

Mulligan, by her own admission, is trapped acting almost exclusively in period pieces. But she has a precise knack for capturing women on the verge of either personal discovery or emotional destruction. Jeanette is both, but her unraveling isn’t tidy. The week in which the story unfolds ("wait, that was only a week?" you’ll ask at the end) begins with an earnest job search and ends with her wishing herself dead.

Jeanette isn’t an admirable character, but Mulligan plays her with empathy, recognizing the slow-simmering pain of women who give up their own lives to make men feel better. She has an expert deadpan too, delivering lines sharpened like arrowheads. While fiddling with the dial on the drive home from a stressful night, the radio picks up a nearby Canadian signal.
“I can’t stand Canada tonight,” she says.

Gyllenhaal is also well-suited, his puppy-dog face effectively disguising Jerry’s anger, which is always threatening to boil over. When the movie reaches its bittersweet conclusion, Gyllenhaal plays Jerry’s reluctant maturation with a melancholic self-control. But he's absent for much of the movie, replaced by Joe, the new head of the house.

Oxenbould plays Joe with general optimism, fit for the slowly crumbling naiveté of a kid who thinks his parents will be happy together forever. But for as much screen time as he has, they might’ve done better in casting someone more expressive. As is, Oxenbould shares the same dead-eyed blankness as Dano.

Both of the parents in Wildlife are deeply flawed, too enamored with the broad possibilities of life to have control over their own reality. But it’s also a statement on the relationship between gender and labor at the time.

Losing a job could destroy a man, while so often women didn’t even have the option to have one.