Wild With Happy at City Theatre 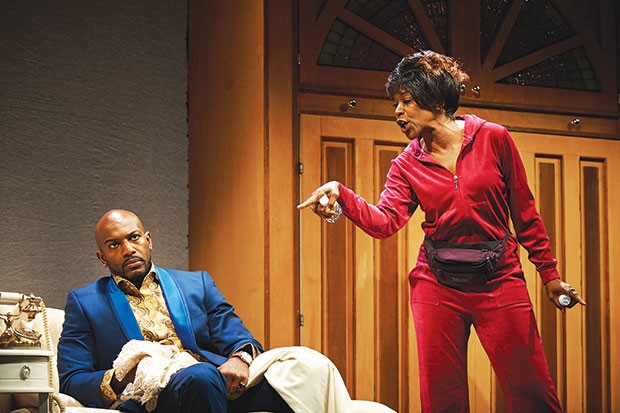 If you don’t believe me, catch Colman Domingo’s Wild With Happy, making its local debut at City Theatre, directed by Reginald L. Douglas.

Gil is an African-American gay man nearing middle age, living in New York and chasing dreams of show-biz stardom. It’s impossible not to like, and root for, the incredibly down-to-earth and decent Gil — but at the same time, it’s impossible not to notice he’s nuttier than a squirrel’s intestine. He might have reasons to be whacked-out, but, really girlfriend, get a grip!

Unfortunately, that won’t happen because at the play’s beginning, his mother dies, sending Gil and a raft of wacky secondary characters into a tailspin of emotional indulgence.

Domingo is a Broadway and TV star (you might remember his joint appearances with Kate McKinnon on The Big Gay Sketch Show) whose ventures into playwriting have been less well known but highly lauded. Wild With Happy has followed the usual new-play development path from readings to full production; it is unclear, however, whether this production is the first full-out production.

It doesn’t matter, though, since no version is going to feature a four-person cast as fully committed as the one City Theatre has assembled: Corey Jones, as Gil, gives a deeply moving portrait of a man emotionally paralyzed by his mother’s death. C. Kelly Wright is captivating as both the recently deceased (and dreamy-eyed) mother and the hard-bitten aunt. Monteze Freeland plays a number of highly amusing supporting roles, including a morally expedient preacher and an outrageously funny best friend hiding pain under calculated shock. And Jason Shavers couldn’t be more adorable as a yearning, hopeful love interest.

As with most plays written by actors, Wild With Happy works best as a collection of individual scenes allowing actors to shine … as opposed to featuring the solid dramaturgical spine a more seasoned playwright would have provided. Domingo’s play is really a showcase for great character actors to show off, which Wright, Freeland and Shavers do. And if it all collapses in on itself with an ending of unsupported magical lyricism — that’s more than OK, because Domingo has spent all that time giving his characters such enormous, palpable (and messy) humanity.