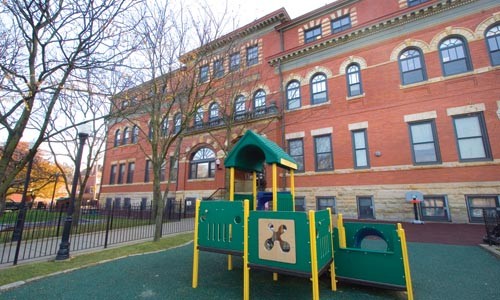 With the notable exceptions of wine and cheese, few things get healthier with passing years. Our city's infrastructure and population both age, and we suffer from both potholes and pot-bellies as a result. So when the only thing in Pittsburgh that seems unflagging is the '70s music, it's nice to know that the city is actually taking a true national leadership role in combining green architecture and historic preservation -- a pairing that reinvigorates the old. Ongoing renovations at the Wightman School, in Squirrel Hill, most recently by Moshier Studio Architects, are a perfect example of a movement that, though sometimes visually subtle, is growing in promise and influence, as well as necessity.

The 1890s schoolhouse by architect Ulysses Peoples is an eclectic Beaux Arts brick structure with some surprisingly classical formal rooms and sculptural interior details remaining. The current life of the building, though, really took shape in the 1980s, when its ownership transferred from the city schools to the Squirrel Hill Urban Coalition, and then to the Carriage House Children's Center. The latter organization is a day-care center, and it is now the primary tenant of the building, which also houses a number of community nonprofits.    The structure has undergone several campaigns of modest renovation through the years, and these have allowed an increasingly focused emphasis on green design. An early renovation reconstituted the first floor and put restrooms on the second. The next campaign installed an elevator and a ground-source heat pump. The latter feature is a fairly unusual system for heating and cooling, but one that emphasizes economy and reduced environmental impact over time, according to Carriage House board member and architect Steve Quick.

The most recent renovation has addressed altering basement spaces for use as an expanded day-care center -- to open two existing rooms, provide an extra classroom and "just sort of free up a lot of space," according to architect Gary Moshier.

Though modest in square footage and highly unobtrusive in its underground location, the project is both complex and consequential. "It was a constant fight to get rid of pipes and ducts," says Moshier. He also addressed further redesign of the mechanical plant and the need to increase daylighting in the basement space. Throughout the project, both the immediate presence of small children and the broader environmental mandate of the clients dictated using paints, carpeting and finishes without toxic chemicals or volatile organic compounds. The new spaces are brightly lit, pleasantly open, and conducive to both the play and napping of the young charges inside.

"The board always told us they wanted a green project, and we ended up using LEED-EB," explains Moshier. While the LEED program has been established for several years as a way of measuring environmental standards in architectural construction, the EB version, for existing buildings, is new. It places responsibilities on the contractor and user as well as the architect -- to recycle waste from construction and ongoing use, to operate mechanical systems in harmony with their design intent and, significantly, to educate users about the building.

Moshier, whose work on the KSBA Architects office in Lawrenceville resulted in one of the country's earliest LEED-certified buildings, is happy to be implementing the latest version of the program. "The industry's matured tremendously," he says. "It's relatively easy to do green buildings compared to what is was eight years ago. Still, nothing is guaranteed. Moshier hopes for a fairly ambitious "silver" rating -- the first for any day-care center, he says -- but won't know the actual results until the U.S. Green Building Council measures the performance of both the building and its users.

Still, the project is already successful in its ambition and many aspects of its execution. Moshier's case study of this project was featured in the "Greening of Historic Properties" national summit held in Pittsburgh at the end of October. Environmentally minded architects, planners, developers, activists and preservationists from around the country met for a day of brainstorming sessions, case-study presentations and a town-hall meeting.

Pittsburgh continues to have a national reputation in these pursuits, and once again, a Pittsburgh architect is presenting important achievements before a national audience.  That sort of news will never get old.