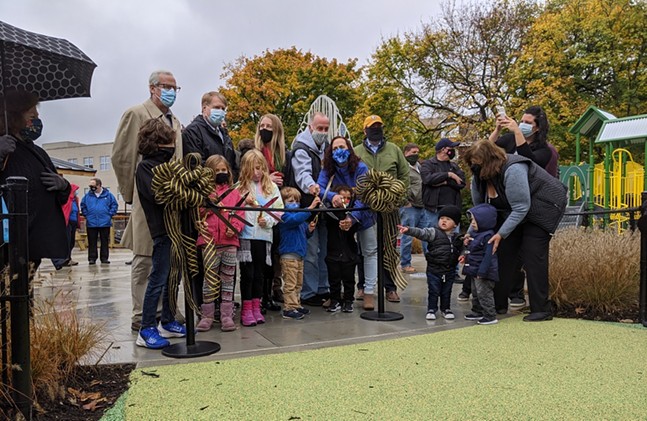 CP photo: Amanda Waltz
Children participate in the ribbon-cutting ceremony for the newly renovated Wightman Park in Squirrel Hill, Oct. 28, 2020
It's a cold, rainy Wednesday afternoon at Wightman Park, but the weather did little to stop about 100 people from gathering at the site to mark its big reopening after four years of renovation. Adults wearing face masks chatted or walked their dogs, while children played on the new playground equipment, or coasted into the park on a new entrance slide going down the embankment from Solway Street.

While addressing the crowd during a special opening ceremony, Will Pickering, executive director of Pittsburgh Water and Sewer Authority, spoke about how the weather conditions perfectly highlighted the park's new green infrastructure components, which were added to help prevent flooding in the neighborhood.

“I can't think of a better day to talk about stormwater than right now,” Pickering said, explaining how a waterfall-like cascade and rain garden, as well as several underground water retention tanks, would catch runoff that would otherwise flood the basements of surrounding residents.

Pickering was among several local officials, including local and state politicians and public works employees, who spoke on the importance of the park and its much-needed rehabilitation. Pittsburgh Mayor Bill Peduto, who was also present, recalled how, during visits to Squirrel Hill, people would pull him aside to point out how the park was not being maintained and had not seen any significant investment in two decades.

Peduto pointed to Wightman as an example of how the City of Pittsburgh is spending more on parks than ever before. He says the city plans to dedicate around $500,000 to maintain and improve the city's 163 parks, the funding coming from a property tax hike approved by voters in a 2019 ballot referendum.
click to enlarge


Besides the stormwater control elements, other improvements include new play areas designed for specific age groups, a multi-use green space, and a new ballfield and half-court basketball area. The park was also designed to be as inclusive as possible by incorporating playground equipment for children of all ages and abilities, as well as for those on the autism spectrum, and new restrooms with an adult changing station touted in a press release as the first of its kind in a Pittsburgh public space.

Overseeing the renovations was the City’s Department of Public Works, as well as Ethos Collaborative and Pashek + MTR, two firms that served as stormwater management and design consultants for the project.

In addition to the recreational aspects are public sculptures made by OOA Designs, a woman-owned and run design company founded by artists Oreen Cohen and Alison Zapata. Working with youth from the nearby Carriage House Center, the two women came up with four stainless steel sculptures installed throughout the park.

Cohen says the sculptures were inspired by nature – three large pollinating insects line a wooden walkway, while the largest work next to the playground is meant to resemble a cascading waterfall. The sculptures also pay homage to the park's history as the former site of the Lorenz and Wightman Glass manufacturers, with colorful panes of tempered glass – provided by Jeannette Specialty Glass/JSG Oceana - framed within the structures. 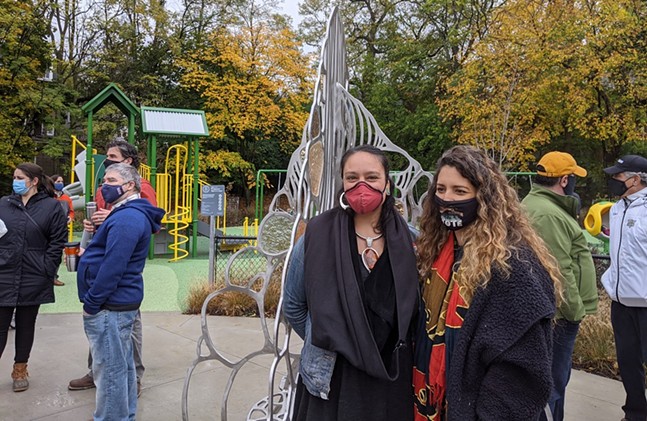 CP photo: Amanda Waltz
Artists Oreen Cohen (left) and Alison Zapata (right) of OOA Designs pose next to their sculpture in Wightman Park
Zapata says the sculptures – the result of a two-year-long process – were also made to be child-safe and functional. Besides being aesthetically pleasing, the waterfall sculpture includes seating and rounded corners.

Cohen also points out that the sculptures were made possible by a program that dedicates 1% of any new public development project's budget to art, an initiative she says the City of Pittsburgh “doesn't really do anymore.”

“We were fortunate two years ago to be chosen because we're a woman-owned business and they really wanted to support that,” says Cohen. “I'm just hoping that more opportunities like that open up for artists in the city.”

Pittsburgh City Councilor Erika Strassburger (D-Shadyside), who Peduto and other speakers credited for carrying the project to completion, spoke on the importance of the new park, calling it a “bright spot” in an otherwise tumultuous year defined by the pandemic, protests, and the upcoming presidential election. 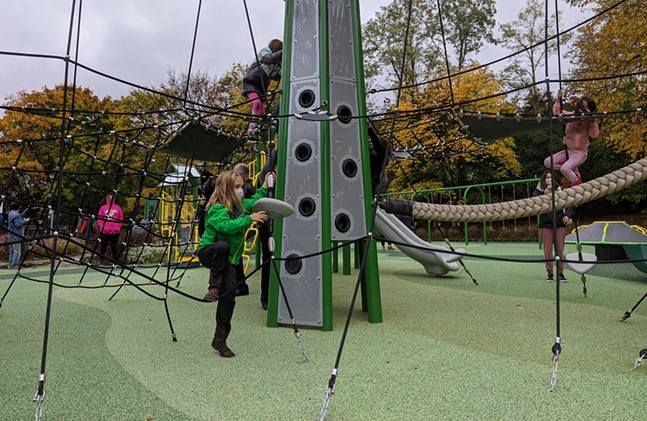 “I truly believe that every neighborhood deserves a park this wonderful, and I look forward to working with my council colleagues and the mayor and other partners here today to ensure that, not just this park, but park equity overall becomes one of Pittsburgh's crown jewels,” said Strassburger.